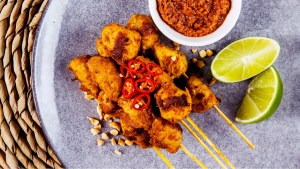 The new items were launched by Australian owned and operated brands Made With Plants and PlantAsia.

Made With Plants introduced dairy-free Parmesan and Shredded Cheddar. It also unveiled a vegan Cheeseburger Sauce, said to be modeled after a similar sauce made by a ‘Big Name’ company.

Cale Drouin is the Co-Founder of Cale and Daughters – the parent company of Made With Plants and PlantAsia. In a statement sent to PBN, he said: “Plant-based meats have never offered a more compelling value proposition.”

He also added that the products smell, cook and taste like conventional meat.

“The mouthfeel of these products is incredibly convincing – and that’s thanks to increased innovation and interest in this space.”

The new items were not just made for vegans. Flexitarians – the term coined for those who mostly eat plant-based but occasionally consume meat and dairy – are a main driver of the country’s boom in vegan food, Drouin added.

“In order to secure the success and longevity of our business, we need to look beyond the core vegan market. In fact, flexitarians are the future of Australia’s vegan movement. Our goal is to make vegan food that’s tasty, accessible, and caters for the broadest range of Aussie consumers possible.

“If people incorporate our plant-based products as part of a flexible weekly diet, we still see that as a significant win in changing consumer behaviour.”

Consumer research conducted by Deloitte Access Economics in 2019 found that roughly 42 percent of Aussies are cutting back on meat, with some ditching it altogether.

Moreover, the new vegan products are now available at most of Woolworths’ 1,000 locations.