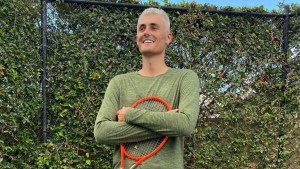 Australian tennis star Bernard Tomic has revealed he’s following in the footsteps of Novak Djokovic in turning to a plant-based lifestyle.

The athlete and former world No.17 was inspired by the Grand Slam icon and is now a “proud vegan.”

He made the comments on a recent episode of the Functional Tennis Podcast.

Tomic went vegan around three years ago and says it is “an amazing feeling.”

“A lot of successful people are vegan. I got inspired actually by Novak, so it was something I tried and it worked for me. I don’t think I’ll ever go back to eating anything else,” he added.

Djokovic doesn’t label himself a vegan but says many of his views align with the movement.

However, he is an outspoken promoter of being plant-based. And, credits the diet for allowing him to “play on this level” for more than four years.

For Tomic, it wasn’t only health benefits that helped him make the switch, but ethical reasons too. “I don’t miss [meat] because there’s animals involved,” the 29-year-old explains, and he is a believer in karma.

Both Tomic and Djokovic aren’t the only acclaimed tennis figures speaking out about their plant-based lifestyles.

Notably, Venus Williams shared how being vegan for over a decade had transformed her life, in an interview earlier this year.

Now, the former world No.1 is a keen investor in vegan companies, and even owns her own protein brand, Happy Viking.

Williams has also joined the index of Veganuary 2022 celebrity backers, with the 31-day pledge due to begin in just two days.

The post Australian Tennis Star Bernard Tomic Reveals He Is A ‘Proud Vegan’ appeared first on Plant Based News.