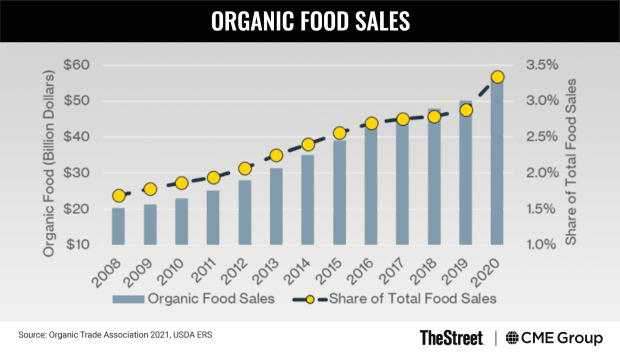 U.S. organic commodities sales reached nearly $62 billion in 2020 as the organic industry achieved its 12th consecutive year of growth. However, a lack of transparency, thinness of the markets and pace of growth all combine to amplify price risks for products like organic corn and soybeans.

A dramatic transformation of the food industry, driven by a stunning array of consumer choices, has taken place over the past 30 years. Imagine walking the dairy aisle in 1990 compared to 2022. Options have expanded beyond the choice of merely whole vs. skim milk to include organic milk, grass-fed milk, an array of plant-based milk, lactose-free milk… and the list goes on. This exercise can be repeated on virtually any aisle, with products from coffee to eggs to meat.

Once viewed as a fad within the broader agriculture industry, continued growth led by expanding consumer demand has established U.S. organic agriculture’s place at the table.

According to data produced by the U.S. Organic Trade Association (OTA), U.S. organic sales reached nearly $62 billion in 2020 as the industry achieved its 12th consecutive year of growth. Organic food sales alone eclipsed $56 billion, accounting for more than 3% of all U.S. food expenditures. Organic market share has approached or exceeded double digits within certain categories, like dairy and some fresh vegetables.

Following growing consumer demand, the footprint of U.S. organic agriculture has expanded. According to organic price reporting agency Mercaris’ estimates, the number of U.S. certified organic acres reached 9.1 million in 2021, which represents a 123% increase from the Department of Agriculture’s Economic Research Service 2008 estimate.

This period has also seen organic dairy cow inventories expand 164%, with 2021 year-end inventories reaching 532,000 heads, per Mercaris’ estimates. While historical data for 2008 does not exist for poultry production, the available data indicates equally robust growth. Per USDA Agricultural Marketing Service data, organic turkey and broiler slaughter increased 303% and 150%, respectively, from 2011 through 2021, while cage-free organic egg layer inventories increased 125% from 2014 through 2021.

While growth in U.S. organic production has been remarkable, it has not been without growing pains.

On one hand, organic commodities markets are just that – markets that are subject to the pressures of supply and demand. On the other hand, the relative lack of transparency, thinness of the markets themselves, and pace of growth all combine to amplify risks for everyone, from producers to consumer-packaged goods companies.

One of these features has been a substantial increase in U.S. imports, particularly of organic grains and oilseeds mainly used as livestock and poultry feed ingredients. Mercaris estimates that U.S. imports of organic grains, oilseeds, and their derivatives reached nearly $1.5 billion in 2020, a rise of 52% from just five years prior. While imports have played a critical role in supporting the rapid growth of U.S. organic consumer demand, their growth has enhanced the interconnectedness of U.S. and global organic markets, ushering in a new level of price risk within these markets.

For example, U.S. organic soybean markets have proven to be particularly exposed. Attributable to the rapid growth in organic poultry production, U.S. imports of organic soybeans and soybean meal reached 241,000 MT and 427,000 MT, respectively, over the 2020/21 marketing year.

By comparison, U.S. organic soybean production reached only 226,000 MT over the same period. Following a cascade of trade disruptions over the past year – including organic certification reform, tariff imposition, and war within the Black Sea region – imports of organic soybeans and soybean meal are on pace to reach six-year lows over the 2021/22 marketing year. This abrupt tightening of U.S. organic soy supplies has driven prices sharply higher since the start of 2021.

Following a better-than-expected harvest, U.S. organic corn supplies surpassed demand expectations over the 2019/20 marketing year. This plunged prices into a year-long bearish retraction, ultimately pressing organic corn prices to 10-year lows. While the conditions which precipitated the 2019/20 price retraction have since subsided, the potential for these conditions to reoccur persists. Looking over the current 2021/22 marketing year – with record U.S. production and expanding imports – the potential for another bearish downturn remains.

While consumer demand has been the driver for increased organic agricultural production for over 20 years, access to robust, independent third-party data and analysis is only more recently available. Through private-sector sources like Mercaris, as well as limited USDA reports, these data and insights are helping to create more transparency in the space.