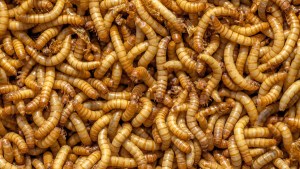 The realm of alternative protein can be overwhelming to grasp, with soaring scientific techniques and technology that can literally print meat without animals. But in daunting news, the latest ingredient to grace the faux-meat industry could be insects.

This is because they’re being dubbed as a source of added protein, a filler in burgers that is less harmful for the environment than cows.

But why are insects being lumped in with the plant-based sphere?

The “edible” bugs industry is receiving widespread business support, with Bloomberg reporting that it could be worth a staggering $8 billion by 2030.

And while no plant-based companies are revealing plans to start adorning insects in their products, the wider meat industry has begun to outstretch an arm of using mealworms, maggots, crickets, and beetles.

The outlet spoke to Aspire Food Group, a company building a giant cricket farm in Canada. “Pound for pound, insects are more efficient than livestock and need less space to grow than soy,” the chief executive told Bloomberg.

They added: “And insects are one of the easiest things to make delicious. They take on the flavor of whatever you feed them.”

It is because of the changing perceptions surrounding plant-based meat that insect start-ups have begun taking note. The CEO of Flying Spark said to the outlet that the appeal will benefit insect producers.

Other companies are hailing it as the solution to animal agriculture’s eternal grip on the climate crisis, with some considering using food waste as feed for the bugs.

Katharine Unger of Livin Farms says insect factories can “cut their emissions and turn the waste into a product they can sell.”

But PETA stresses that the fact insects are so small makes it no different from eating any other being.

“As for insects, well, cognitive scientists now tell us that their brains, while tiny, perform the same functions as the human midbrain.

“The ancient neural core that supports our capacity for awareness. In other words, these little beings, like us, are conscious – making the idea of farming them for our food supply ethically problematic.”

The post Are Insects Set To Follow Plant-Based In Becoming New Meat Alternative? appeared first on Plant Based News.