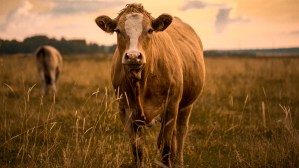 Animal agriculture is responsible for at least 87 percent of greenhouse gas emissions, according to a new report.

The Climate Healers position paper, by Dr. Sailesh Rao, has been published by the Journal of Ecological Society.

It argues that the influence of the meat and dairy industry has ‘underestimated’ the environmental impact of livestock farming.

However, the FAO has formed an official partnership with the meat and dairy industry called the Livestock Environmental Assessment and Performance (LEAP) Partnership.

Moreover, Climate Healers says prior calculations have ‘failed to include the negative impact of forests lost to animal agriculture’.

Therefore, the new report includes the impact of deforestation on climate change in general and CO2 levels specifically.

It also says global warming will ‘rapidly accelerate’ if we focus ‘exclusively on fossil fuels and ignore the threat posed by animal agriculture’.

In a statement sent to PBN, Climate Healers said: “When people think of animal agriculture and climate change, they’ve been encouraged to consider it only from the perspective of the methane produced by the animals themselves.

“This is a significant issue, as animal agriculture accounts for at least 37 percent of methane released annually, according to the FAO itself.

“However, it is only one of the negative impacts of animal agriculture. Animal agriculture is also the leading cause of desertification, habitat destruction, wildlife extinction, and ocean dead zones… All of which degrade the climate.

“This paper affords a crucial wake-up call to governments, non-profits, private industry, and the media. The negative impact of animal agriculture is ignored at our own peril.”

You can read the full paper here