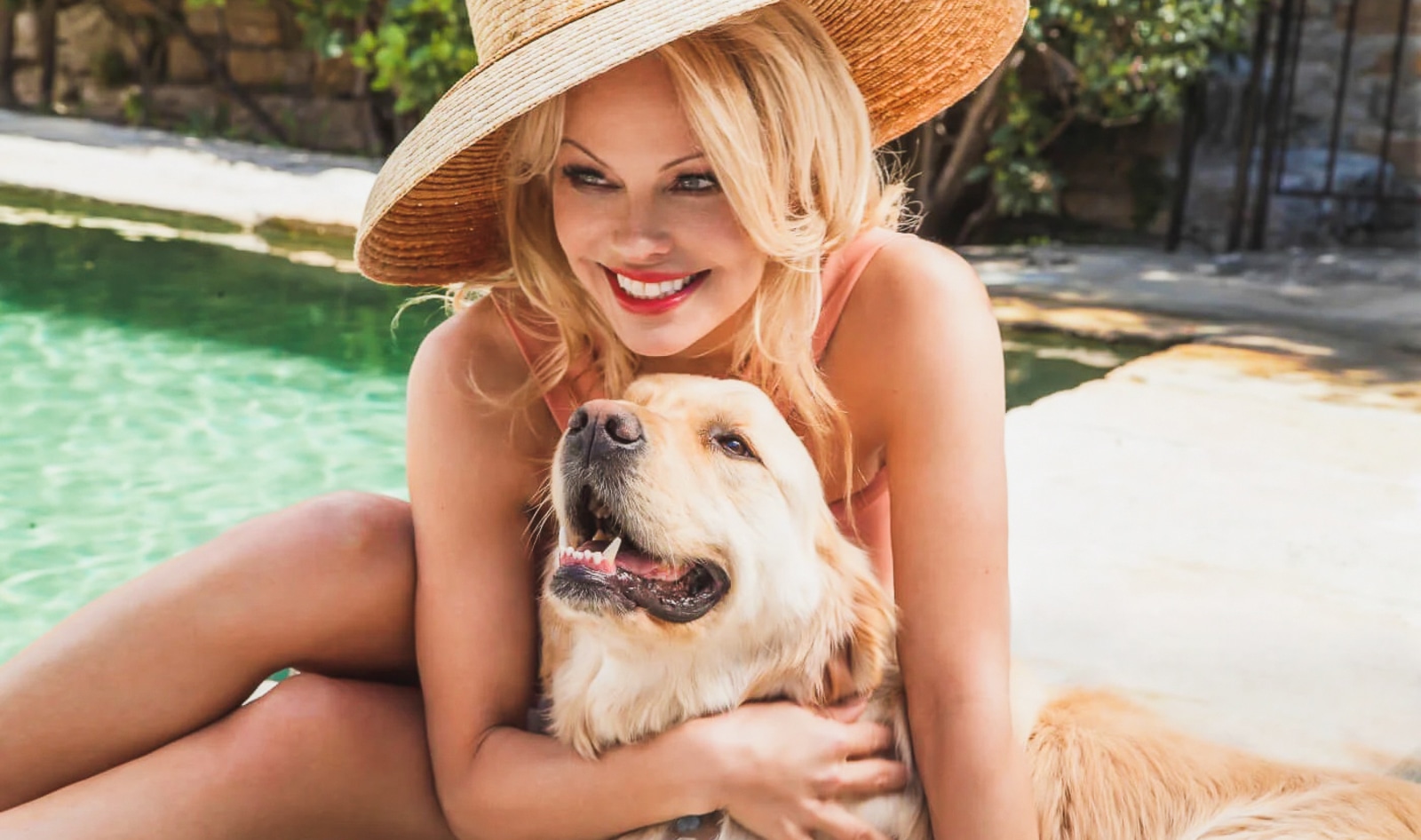 The 2010s have seen a dramatic shift in animal activism. Non-profit organizations are focusing less on the animals and more on factors such as human health, social justice, and climate change. The movement has made strides in lobbying for political change rather than concentrating on individual consumer habits, and this softer, diplomatic tone has paved the way for the future of animal advocacy. Does that mean the shock factor of former animal rights campaigns has no merit? Certainly not. The movement needed heads to turn, and now that people are looking, advocates can speak their truth.

Pamela Anderson makes heads turn, and she knows it. At the surface level, the attitude is unabashedly voyeuristic—people see her as the busty blonde on Baywatch, or the outspoken actress who poses naked for PETA campaigns—but she ultimately holds the power. Anderson has spent her life making people look, and once she captures their attention, she has a lot to say.

“What I know in life runs the gamut of the ‘feminist experience.’ The true meaning of feminism is this: to use your strong womanly image to gain strong results in society.” —Pamela Anderson

Anderson in front of the camera

Anderson doesn’t come from fame. She hails from Vancouver, Canada where she grew up with blue-collar parents and a love for gymnastics and sport. During a British Columbia Lions football game, she had her first Hollywood moment. Her face was blasted over the stadium screen and she was invited down on the field, spurred on by cheering fans. That experience led to a commercial contract with Labatt’s Beer as the Blue Zone Girl. From there, Anderson continued to make her own luck, and, eventually, made it to Hollywood.

Anderson found her strength in capturing attention. Beyond starring as C.J. Parker in the original Baywatch, she’s posed for 14 Playboy covers, made countless “Hollywood’s Hottest” lists, and played herself in a number of film and television shows ranging from the Scooby Doo live action film to Ru Paul’s Glamazon. She continues to work in film and television, including an upcoming horror film titled 18 & Over. With 53 acting credits to her name, Anderson has an impressive career under her belt, and she uses that platform for good.

Anderson and the animals

In a piece published by The Guardian in 2018, Anderson stated she went vegetarian as a child after seeing a beheaded deer (courtesy of her hunter enthusiast father) hanging outside their home. While the star has been known to champion the vegan cause, she also admits in that same article, “I call myself a naughty vegan. I live in France, I eat croissants. I do the best I can, but I’m not a dictator. It’s a radical choice to be vegan, so I’m not so strict.” Despite her admitted leniency, both of her sons are vegan, and she is a highly touted supporter of PETA and the animal rights movement.

Anderson has the audience to engage in subtle forms of advocacy. If she wears a T-shirt that says “Vegan” or is captured in a photo walking out of a vegan restaurant, people will notice. But for her, that’s not enough, and she doesn’t believe it’s enough for others, either. She wrote in The Guardian, “As for thinking you’ve done something because you’ve worn a slogan T-shirt or used a hashtag? You still have to take action. I’ve written to governments, delivered a petition to stop bullfighting and protested about foie gras in front of the French government.”

She’s done more than just that. As early as January of this year, she appeared on Good Morning Britain and was put in the hot seat by Piers Morgan who questioned her claim that vegans have better sex. She’s sent faux fur coats to Kim Kardashian and Melania Trump to entice them off fur fashion; she’s written Canadian Prime Minister Justin Trudeau to advocate for vegan meals in prisons; and she’s advocated for breastfeeding over dairy-based formulas in a letter to the World Health Organization.

As a 14-time Playboy bunny, Anderson knows the power behind the male voyeuristic lens, and she’s not opposed to using it when advocating for animals. She always leaves something to be desired—whether that’s in the form of her crossing her arms against her chest or a string bikini—she’s never completely nude. That being said, here are the seven times Anderson has posed for animal advocacy campaigns.

Anderson’s most recent shoot in the fall of 2020 revealed her nude, lying amidst rose petals, to debut her collaboration with the luxury French handbag designer, Ashoka. The capsule collection—Pamela Anderson x Ashoka Paris—features eight vegan apple leather clutches and box bags in four neutral colors. Fifty-two years old at the time of the photography shoot, Anderson is doing more than selling accessories—she’s proving the ageless benefits of a plant-based diet.

Far from nude but still suggestive, Anderson posed with a group of celebrities in 2009 as a part of PETA’s Save the Seals campaign. In her graphic, the celebrity is pulling down a white Save the Seals T-shirt over her tanned bare thighs. The message: stop the slaughter of baby seals in Canada.

3 All Animals Have the Same Parts

Perhaps one of the most notable of her animal advocacy ads, Anderson’s participation in this 2010 campaign was literally marked by butcher lines. The image divides Anderson’s bikini-clad body into cuts of meat—from rump to shoulder. Despite Anderson’s essential areas being fully covered, several Canadian entities banned the ads for risqué content.

If Anderson was born a few decades earlier, she’d be a dead ringer for an Alfred Hitchcock film. She posed for this Psycho spin-off during a time when California was facing major water shortages and everyone from environmentalists to public officials were advising residents to take shorter showers. This campaign revolted against that recommendation—it’s not five-minute showers that will reserve water, it’s cutting back on our dependence on livestock and going vegan.

5 Turn Over a New Leaf Campaign

Anderson makes the term “Lettuce Lady” far sexier than it sounds. As part of a PETA ambassadorship program, Lettuce Ladies seem to be the equivalent of luxury car models for the animal rights movement—they turn heads and attract people to the bigger picture. As a Lettuce Lady, Anderson appears at events clad in strategically placed pieces of lettuce (they’re firmly attached to a green swimsuit underneath—you can stop clutching your pearls).

6 Give Fur the Cold Shoulder

Placed against a soft winter blue background scattered with artificial snowflakes, Anderson teases a bare shoulder as she grips herself from the cold. The fight against fur has been a constant in Anderson’s career as an animal activist. It’s senseless, cruel, and unnecessary.

Anderson knows how to capture an audience with just a look in a photograph, but she really shines on film. In this tongue-in-cheek clip, Anderson impersonates a TSA officer, accosting anyone who dares to go through security wearing any animal-based fabrics. It’s playful and shows off Anderson’s sense of humor—it offers a glimpse into Anderson as a well-rounded person and advocate—not just a sex symbol. She’s more than a model, or an actress, or even a Playboy bunny—Anderson is a mom, a diligent worker, and a passionate animal activist, and for decades, she has held the power to make us look in her capable hands.

For more vegan changemakers, read:
Is Woody Harrelson Vegan? Everything You Need to Know About the Eco Activist
9 Ways Billie Eilish Is Paving the Way for a Vegan Future
Joaquin Phoenix on Veganism, the Environment, and Social Justice