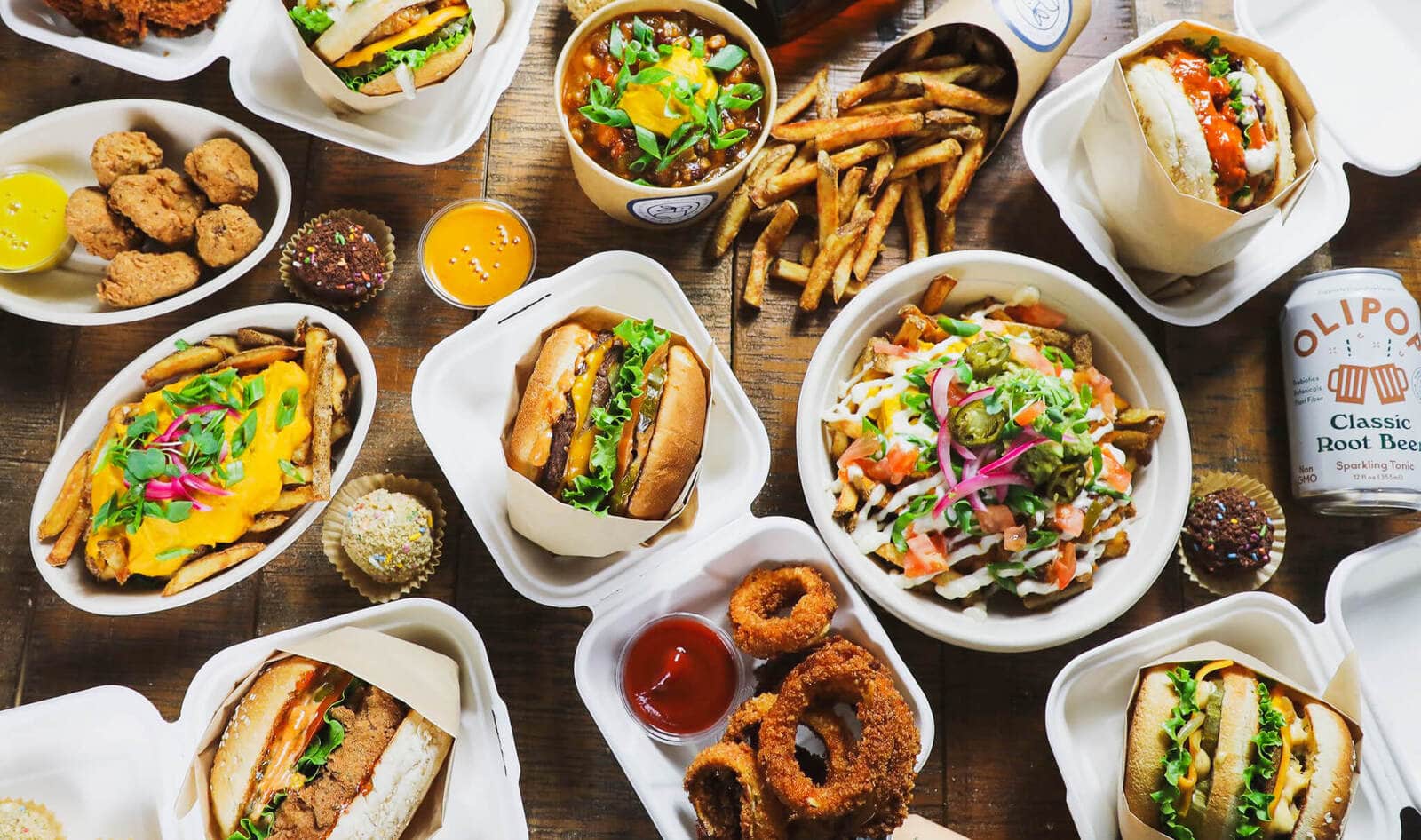 Rhode Island may be the smallest state in the US, but its vegan food options are booming like never before. While New York and California tend to attract the most plant-based buzz, the Ocean State has inarguably become a recent hotspot for vegans on East Coast. From plant-based ice cream shops to an entire vegan food hall marketplace, there’s nothing quite like Rhode Island’s plant-based community.

Looking for an on-the-go vegan meal—literally? Then stop by the Basil & Bunny food truck. This modern food truck makes vegan fast food accessible to all looking for a quick and satisfying bite. Best sellers include the Bunny Mak and the Buffy Bunny—both modeled after famous fast-food menu items. The Basil & Bunny food truck has become such a local hit that the company is now launching a fast-casual storefront in Bristol, RI in July 2022. Don’t worry though; the food truck is here to stay, and can even be hired for private events too.
find out more

Sprout and Lentil is an award-winning Middletown, RI vegan restaurant founded by chef, entrepreneur, and animal rights activist Carmen Foy. After 12 years of working as a private chef and working in restaurants around the world, Foy began to plant her roots by selling vegan grab-and-go dishes at a local farmers’ market. Soon after, Sprout and Lentil launched its mainstay location to spread the word about sustainable plant-based eating. Now, it’s become a vegan destination, topping “Best Of” burger lists while establishing a hearty menu of other specialties such as pizza and cauliflower steaks.
find out more

For a smoothie bowl that’s both delicious and picture-perfect, stop by Root on Broadway, located in Newport, RI. This vegan eatery is run by power couple Kate Moran and Paul Webber who came together over a shared passion for serving plant-based meals. Root on Broadway has been rated by Yelp as one of the top 100 vegan restaurants in the US, with an extensive drink and food menu to back it. Fan favorites include the coconut bacon BLT, the cold-brew awakening smoothie, and of course, the signature açaí and grain bowls.
find out more

Like No Udder is truly a Rhode Island gem. This plant-based business started as the world’s first vegan soft serve ice cream truck, eventually establishing a permanent location in Providence, RI. Creativity is key, with options for customers to create their very own soft serve “Unicorns” using a variety of flavors and toppings. But this company does more than just scoops and swirls. Bred from the pandemic, the shop started selling savory knishes which were an instant hit. Like No Udder also serves as a pillar in the Rhode Island vegan community by hosting various events like the annual Rhode Island Vegan Fest.
find out more

No matter how old you are, it’s impossible to age out of a propper, gooey grilled cheese. PiANTA specializes in this timeless classic, though updating it to today’s modern vegan audience. Owned by Executive Chef Michelle Politano, PiANTA’s plant-based cuisine has stolen the hearts and stomachs of many Rhode Island foodies. Fan favorites include comfort foods like the Apricot & Prosciutto Grilled Cheese along with signature menu items like the Vegan Steak and Cheese Egg Rolls. PiANTA also has its very own in-house Executive Pastry Chef, Danielle Rotella, best known for her delectable carrot cake and her traditional Italian panna cotta with grilled stone fruit. If you’re anywhere near Providence, RI (which is basically anywhere in the state), you have to check this place out.
find out more

Apothica Cafe is a vegan apothecary-inspired coffee shop located in Cumberland, RI that provides healthy alternatives to everyone’s favorite cafe drinks. This plant-based joint specializes in espresso and tea-based lattes made from scratch using all-natural ingredients. Best sellers include the Dragonfruit Matcha and herb-infused Moon Milks. To satisfy your hunger, try out the mouthwatering breakfast menu which includes dishes like vegan burritos and bruschettas. Finish your stay with a delicate vegan macaron or an oh-so-satisfying ice cream cookie sandwich.
find out more

Celebrated creates elevated plant-based desserts fit for any occasion. This locally-owned bakery is located in Warwick, RI, and carries everything from succulent-inspired cupcakes to DIY cookie decorating kits. The bakery also specializes in custom orders, including vegan wedding cakes. For non-locals who are craving a slice of heaven, Celebrated offers nationwide shipping for popular food items like its seasonally inspired french macaroons.
Find out more

Plant City offers vegans and non-vegans alike a little bit of everything. The community space is the brainchild of internationally-acclaimed chef Matthew Kenney, who launched this all-vegan food hall in Providence, RI. Plant City includes a vegan food marketplace along with four plant-based restaurants, three bars, and a vegan bakery. One could easily spend an entire day of eating, drinking, shopping, and socializing here.
find out more

Wildflour Bakery serves up delicious vegan and kosher treats that are sure to delight. The Pawtucket, RI-based pastry shop favorites include a vegan cheesecake and its seasonal PRIDE month-inspired whoopie pies. This dessert shop also offers fresh protein-packed smoothies compliments of Fully Rooted. Guests are welcome to spend the day working remotely at the bakery while enjoying all of the plant-based menu items Wildflour has to offer.
Find out more

Head to downtown Providence for an expansive menu of vegan Pan-Asian dishes. Veggie Fun’s plant-based and kosher Asian-inspired cuisine spans everything from rich dishes like a Malaysian curry stew to the kitchen’s take on the classic General Tso’s chicken. If you’re looking to satisfy your hunger and not break the bank, Veggie Fun is it.
Find out more

Garden Grille is a Pawtucket, RI vegetarian restaurant with a surplus of vegan options available. The fresh tofu BLT, spicy Korean tacos, and decadent Potato Pizza are just three of the many vegan menu items this concept has to offer. This long-standing pro-plant restaurant has been a Rhode Island favorite since 1996 and continues to be a popular spot for plant-based eaters across the state.
Find out more

For more vegan city guides, read:VegNews Best of LA Awards: the 34 Best Vegan Food Spots to Try
Why Sacramento Should Be Your Next Vegan Destination
Why Rochester, New York Is the Best Small City in America for Vegans