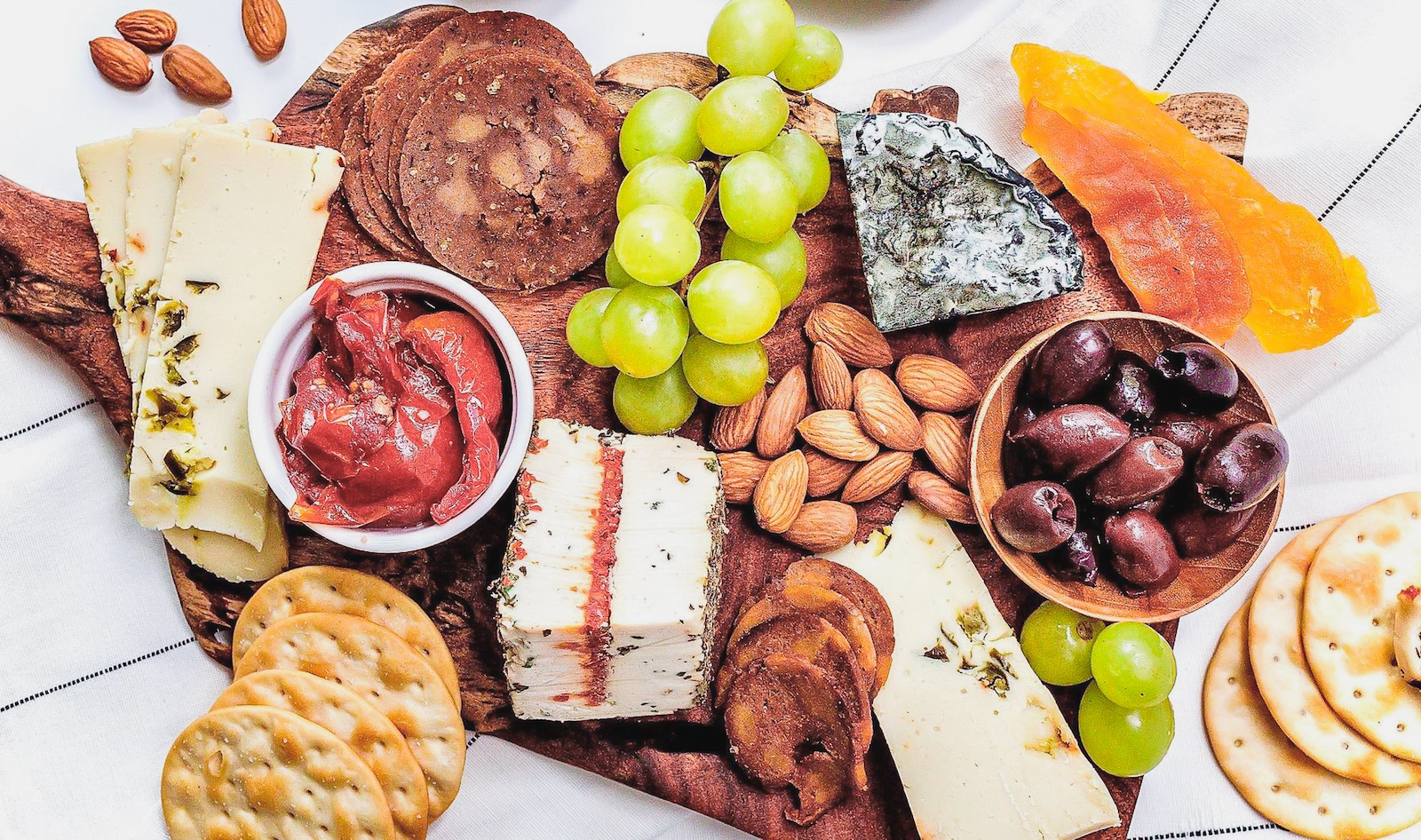 The wave of vegan butcheries has given rise to a new niche merchant—plant-based cheese shops. Identical to their dairy-based counterparts, these cheesemongers carry gourmet rounds of artisan-crafted cheese along with wine and must-have cheeseboard accouterments. Whether you’re enjoying a cheesy vegan meal prepared on-premise or stocking up on cheese to go, these vegan cheese purveyors have everything you need.

The vegan cheese at this unassuming strip mall cheese shop is fit for royals—and we’re not hyperbolizing. The shop and its founder, Youseff Vromage, is featured in Prince William and Kate Middleton’s royal wedding album. The now-Duchess of Cambridge used to be a regular customer back in the days when she lived amongst us commoners in Los Angeles. Also, in case you were wondering, Vromage is officially this vegan cheesemonger’s last name—he had it legally changed. If that doesn’t show dedication to his craft, nothing does.

Cultured South is a fermentation company and bar inside a cool industrial brewery. It carries Pure Abundance vegan cheeses in its grab-and-go section and features these small-batch vegan cheeses on its menu. Vegan options include a cheese plate that comes with three signature Pure Abundance cheeses, crackers,  jams, and pickles or a gooey, melty grilled cheese served on sprouted sourdough bread.

3 The Vreamery in Paso Robles, CA

Come for the artisan vegan cheese, but stay for a freshly made melt. The in-house Melt Bar features a rotating menu of paninis and out-of-the-box grilled cheeses along with grazing boxes composed of vegan cheese, charcuterie, dried fruit, and nuts. Customers can pick up their favorite cheese selections to enjoy at home—from Blissful Balsamic to Mellow Jack.

Coined, “the original vegan cheesemonger,” Riverdel has consistently raised the bar for vegan cheese since its founding in 2015. The company creates its own line of cheeses (which are aged in a traditional walk-in cheese cave) and also carries a wide selection of the highest quality vegan cheeses. Don’t expect to grab an eight-ounce tub or plastic container—most cheeses are cut from giant wheels, sold by weight, and delicately wrapped in paper. Riverdel keeps the traditions of the old-timey cheese shop without the animal cruelty or enormous environmental footprint.

Technically, this is a vegan butcher; however, the variety of vegan cheese here wins it a spot on this list. In lieu of hard, rind-bound cheeses, you’ll find options best suited for sandwiches and deli sides. Think Havarti, pepper jack, cheddar, gouda, and feta—all perfect for handholds and salads. While pursuing the deli case, pick up a loaf of locally made Breadsmith bread and a box of crackers to go with your cheese selection. Of course, a few slices of pastrami and capicola ham are a must as well.

Far more than just a cheese shop, you could spend an entire day sampling the extensive breakfast, daytime, and dessert menu of Rebel Cheese. Just looking for cheese? Order a glass of wine while you peruse the collection because it will take time to decide between the Chebrie (a cheddar and brie hybrid), the Blueberry Vanilla Chevre Log, the Garlic Herb Boursin, and all the other outstanding flavors. If you’re looking for a unique gift for the vegan who has everything, a wheel of Rebel Cheese could be it.

From pillowy mozzarella to smooth almond ricotta, this vegan Italian eatery has mastered the art of plant-based dairy. The delightful menu of signature pizzas, lasagna, and desserts may first grab your attention, but don’t forget to scan the extensive selection of house-made vegan cheeses. Beyond the Italian classics, the creamery churns out a variety of other cheeses such as Havarti and cheddar. Customers travel across state borders to stock up!

This Brooklyn-based cheesemonger has adopted a delivery and pick-up model due to the pandemic, but the impressive selection has remained a constant for Brooklyn and Manhattanites. The collection ranges from aged cheeses to fresh sour cream in addition to must-have cheese accouterments such as jam, chocolates, and sprouted bread. One could make a weekly habit of Dr. Cow delivery and never tire of the deliciously endless cheese pairings.

Want more FABULOUS insight on our favorite vegan hotspots? Pick up a copy of the brand-new VegNews Guide to Being a Fabulous Vegan! Whether you’re a seasoned vegan or just leaning into the plant-based lifestyle, you’re going to love this 256-page super-practical manifesto full of tips, recipes, stories, taste tests, and so much more. Order your copy today!