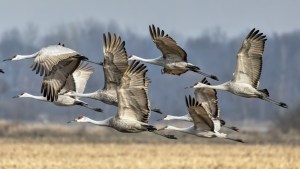 More than 5,000 cranes and half a million chickens have been killed following an outbreak of bird flu in Israel.

Despite the cranes being migratory, it’s understood they caught the disease from a swarm of bird farms.

The disaster is being branded the “most serious damage to wildlife” in the country’s history. This is according to environmental protection minister Tamar Zandberg, The Guardian reports.

Hula Lake Park is the location where the crane population is mainly based.

Here, thousands of the species pass through year on year as they voyage to Africa.

But as of this week, government officials were seen in hazmat suits scrambling to dispose of the carcasses as quickly as possible to contain the disease.

And around the area, half a million chickens are being slaughtered. An agriculture ministry spokesperson confirmed the birds are being culled to prevent the disease from spreading.

Now, the environment and health ministries are monitoring the outbreak.

Other countries around the world have been on high alert as severe bird flu cases cropped up in China, Japan, Norway, Belgium, and the UK this winter.

In fact, the UK is currently witnessing its “largest-ever” outbreak of the deadly H5N1 strain. Government officials voiced concerns as the virus swept through turkey, chicken, duck, geese, and swan populations.

Scientists and animal rights campaigners alike maintain the easiest way to curb the virus is by dismantling factory farming for good.

This is because bird flu, like many zoonotic diseases, can spread easily when animals are kept in cramped conditions.

As Juliet Gellatley of vegan charity Viva! explains: “It is human commercial activities, particularly those associated with poultry, that are the major factors responsible for the global spread of bird flu.”

The post 5,000 Cranes And Half A Million Chickens Slaughtered Amid Israel Bird Flu Eruption appeared first on Plant Based News.