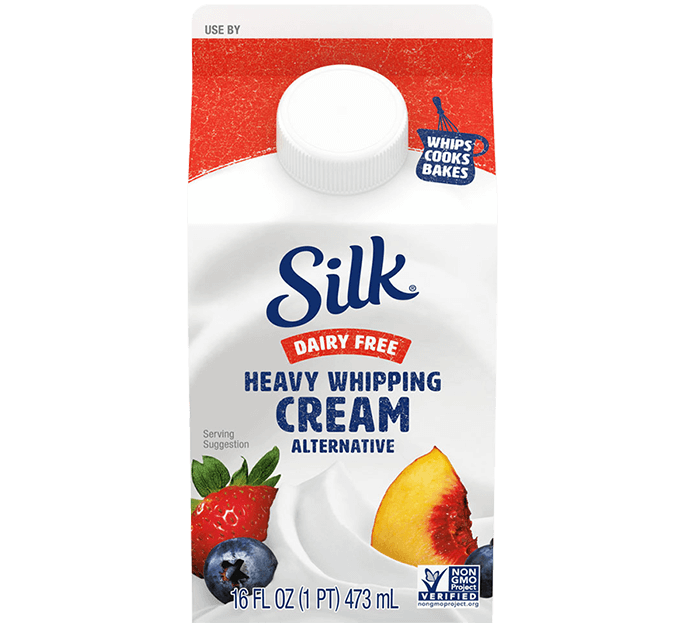 Whether you’re vegan or just lactose intolerant, heavy cream might not be an option for your diet when cooking.

However, like most ingredients, there are some close vegan heavy cream alternatives, and you won’t taste the difference in most recipes.

It’s likely that more brands will be available over time. However, depending on where you live, you may not be able to find them.

Alternatively, there are quite a few substitutes you can make yourself if you’re trying to make a recipe vegan-friendly, which I’ll share with you here. Most don’t whip very well, but are great in other recipes that call for heavy cream like pasta.

The heavy cream alternatives are based on 3 main types of ingredients: Coconut, Soy, and Nuts.

Not surprisingly, these are also the main types of non-dairy milk alternative to regular milk.

Now, let’s take a look at the best alternatives to heavy cream for vegans:

This is my go-to and most recommended vegan heavy cream substitute when possible (as long as you don’t mind the taste of coconut), and the only one that whips up well. It works really well because it has a high saturated fat content, just like dairy heavy whipping cream.

If you’ve ever looked at making your own vegan ice cream, you’ve come across coconut milk or cream as a main ingredient.

You can either buy cans of coconut cream (hard to find), or buy full-fat coconut milk (easy to find).

If you buy canned coconut milk, put it in the fridge overnight, and scoop out the thick parts on the top (that’s the cream). If it’s too thick (will depend on brand), mix in some of the thinner liquid that’s leftover in the can.

Alternatively, you can use the thin remaining liquid as a vegan substitute for evaporated milk.

You can substitute coconut cream with heavy cream in a 1:1 ratio.

How to Make Vegan Whipped Cream From Coconut Milk

This is my preferred substitute when it comes to making vegan whipping cream.

I’m not an expert baker, but it always turns out pretty well.

For detailed instructions, refer to this recipe for coconut whipped cream on Minimalist Baker (or the video below):

While you don’t need to add cream of tartar (which is vegan), it can make your whipping cream more consistent.

Heavy cream is made from milk and butter, and non-dairy milk is already comparable to dairy milk.

So all that’s left is the butter.

Since heavy cream is defined based on having a butterfat content of 36% or more, so it’s important to add some source of fat (preferably with a good amount of saturated fat to mimic butter).

Well, there are quite a few vegan alternatives to butter, so we have a few options.

You could use a vegan butter or dairy free margarine, but if you’re looking for a quick and easy substitute, just use a vegetable oil like olive oil (other oils like coconut oil will work, but will affect the taste in different ways). Most good vegan butters are mostly olive oil anyways.

This cream will replicate the flavor and creamy texture of heavy cream well in baked goods, but won’t whip up like dairy cream will. If you want to add a little flavor, add a tablespoon of lemon juice.

(Can Be Partially Whipped)

We’ve already seen that soy milk is a good base to start with since it’s a high protein vegan milk.

It turns out that another soy product, silken tofu (that’s the really soft stuff) can be combined with soy milk to make a plant-based heavy cream alternative with lots of protein.

Note that you’ll want to get plain tofu. Flavored tofu will make it taste weird, and could be an issue if you’re trying to bake something gluten free (some flavored tofu have gluten added).

You simply blend together silken tofu and soy milk together (1/4 cup milk and 1 lb of tofu). Depending on the tofu you may need to add more or less milk, so add in the soy milk gradually until you get a decent texture.

Can Silken Tofu Be Whipped?

It’s not going to whip up into nice stiff peaks, it turns into more of a fluff, which is enough for certain recipes.

While I’ve done this myself, my pictures are terrible, so refer to this recipe for a clearer look.

This is an option if you don’t need to whip up your vegan heavy cream, and uses the most common ingredients. It’s more like a light cream than a heavy one though, and better in soup than any baked goods.

You start with any dairy free milk (e.g. almond milk or cashew milk), and then add cornstarch to it to thicken it up.

If you need 1 cup of heavy cream, start with 1 cup of non-dairy milk, then add cornstarch to it and mix as you add. In general, you’ll need about 2 tablespoons of cornstarch per cup of milk.

This one will take a bit of extra work, and you won’t be able to buy it anywhere that I know of.

While cashew cream won’t whip up well, it is another option for general cooking. Here’s the recipe.

In short, you’ll need to blend together raw cashews with water in a food processor and find the right consistency. You can then substitute the vegan cashew cream in a 1:1 ratio with heavy cream.

So far, these have been the best vegan substitutes for heavy cream I’ve found that fit a vegan diet. If you try any of these, let me know how it went in a comment below.

Here’s a quick table of the dairy free heavy cream substitutes I’ve gone over in this post:

The best one for you will depend on the specific recipe (e.g. soup vs baked goods vs whipped cream) you’re following, the ingredients you have available, and any dietary restrictions.

Try to experiment and find the one(s) that you like best.

Eventually, I’m sure a company will release a vegan version of heavy cream that you can buy in stores that’s close to the version made from cow’s milk.

What do vegans use instead of heavy cream?

There are now some plant-based heavy creams for sale in stores that vegans can buy. Alternative, you can make your own vegan heavy cream as shown on this page from ingredients like non-dairy milk and oil or starch.

What is a dairy free substitute for heavy cream?

Most heavy cream substitutes contain dairy still, but there are some plant-based ones without dairy. As detailed on this page, you can make a substitute from non-dairy milk and some kind of thickener (oil, starch, even tofu).

Can I use almond milk instead of heavy cream?

While using almond milk directly instead of heavy cream will add a similar flavor to your recipe, it won’t have the same texture. Almond milk is much thinner than heavy cream, so you need to combine it with a certain amount of oil or starch to thicken it up.