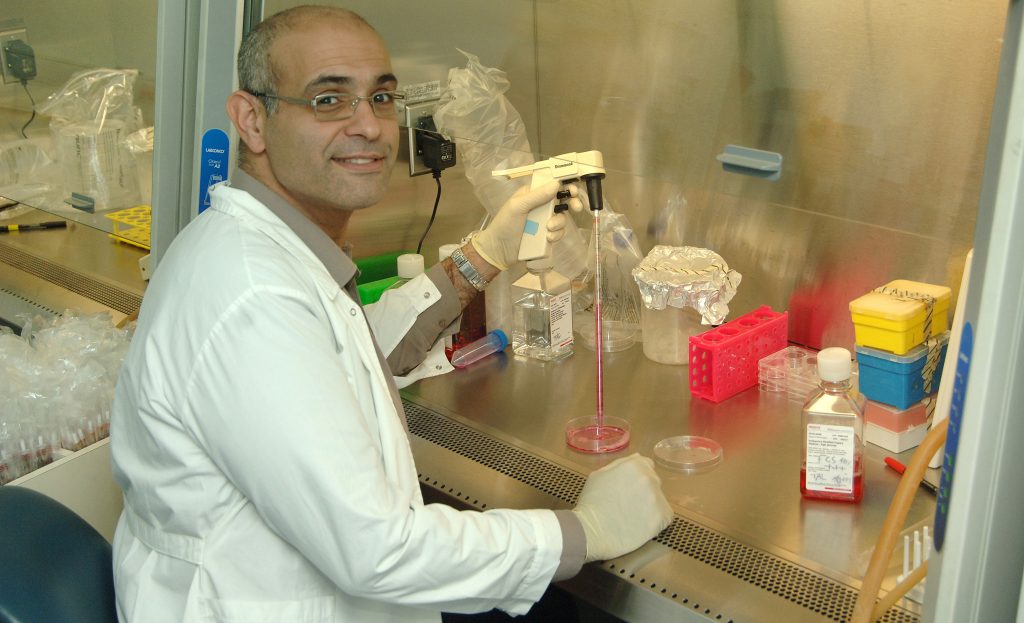 Cancer is a leading cause of death worldwide, accounting for nearly 10 million deaths (one in six people), according to figures from the World Health Organization. Every year, over 1.7 million people are diagnosed with cancer in the US alone.

Cancer is one of the most heavily invested areas of medical research. Over $5 billion is spent each year, yet most studies are confined to the clinical viewpoint, focusing on the disease but not the patient and thereby limited in scope.

To mark World Cancer Day on February 4, NoCamels is highlighting three researchers using innovative strategies developed in Israel to focus on cancer therapy that will benefit the patient.

Professor Yuval Shaked at the Department of Cell Biology and Cancer Science at the Technion’s Rappaport Faculty of Medicine and the Director of the Technion Integrated Cancer Center (TICC), and doctoral student Jozafina Haj-Shomaly recently led a study that found ways to intervene in a situation where successful chemotherapy caused the adverse reaction of cancer metastases, the main cause of cancer-related mortality.

While existing cancer treatments are highly effective and save lives, there are patients that do not respond to this treatment and suffer when the disease breaks out more aggressively afterward.

Prof. Shaked and team conducted a study in a breast cancer model in mice and also used the anti-cancer drug Paclitixel to detect a mechanism that causes a structural change in health by the immune system that “may enable the development of combined drugs and treatments and prevent the phenomenon and reduce the chances of developing mestases,” Prof. Shaked said in a university statement.”

“Our findings not only reveal new mechanisms that can explain why chemotherapy drugs sometimes do not work, but it also provides a solution. The reason is that we found the molecule expressed by immune cells which contribute to the structural change in the lungs supporting metastasis,” Prof. Shaked tells NoCamels.

The team is now developing barriers to the different proteins that cause the same structural change in lung tissue, Prof. Shaked said in a university statement.

And that’s just part of his day job.

Prof. Shaked is the co-founder of OncoHost, an Israeli company that focuses on the host response to cancer therapy, seeking to personalize care rather than develop new treatments by measuring changes in the proteins of a patient’s blood before and after treatment, which helps predict whether the patient will respond to therapy and what proteins are part of the resistance.

He co-founded the company in 2017 after accidentally adding an anti-cancer drug to a petri dish of cancer cells and watching those cells die. He realized later that how the drug treatment interacts with the body’s immune cells determines how it will affect the cancer and that treatment could even help a tumor grow. He moved to Israel and determined that his idea could help launch a company. OncoHost was born and he serves as the company’s Chief Scientific Adviser.

“When my initial discovery demonstrated that the host ‘protects’ the tumor from the treatment, I realized that when we measure this ‘protection’ process of the host, we can predict outcomes of patients to specific therapies, therefore demonstrating a new dimension in precision medicine in oncology. Based on these findings I founded OncoHost which utilizes the host response profile in order to predict outcome.”

The way the company operates is by taking blood samples (liquid biopsy) from patients at baseline and on treatment, and analyzing up to 7000 proteins. All these proteins and their network represent specific biological pathways that are generated in an individual, and that can tell us whether these biological pathways are in favor of tumors or not. Based on the signature of some proteins, Shake tells NoCamels the company can then assess/predict whether the patient will benefit from a treatment or not.

The ultimate goal of the company is to provide the oncologist, with a high confidence what are the right options of treatment for the patient, he adds.

Prof. Varda Shoshan-Barmaz of the Department of Life Sciences and the National Institute for Biotechnology in the Negev (NIBN) at the Ben-Gurion University of the Negev, has been recognized for her achievements in expanding the boundaries of research and knowledge in cancer cell research. Prof. Varda Shoshan-Barmatz has shed light on a protein highly expressed in different tumors. She has specifically identified the voltage-dependent anion channel (VDAC1) as the “gatekeeper” of mitochondria.

“We were able to demonstrate that VDAC1 is at the intersection of cell metabolism, apoptotic cell death, and diseases,” she tells NoCamels, noting that it also plays a role in controlling metabolic and energetic cross-talk. “By regulating the metabolic and energetic functions of mitochondria, VDAC1 can control the fate of cancer cells.”

Since mitochondria play a central role in the execution of apoptosis, or the process of programmed cell death, and VDAC1 is the “gatekeeper” of mitochondrial function and dysfunction, Prof. Shoshan and her team have generated potent, specific, and effective VDAC-base cancer therapies that facilitate the death or halt the growth of cancer cells. They include triggering apoptosis by targeting VDAC over-expression in cancer cells; stopping cell proliferation by down-regulation of VDAC expression which demonstrates the impression of VDAC expression in cancer cells; and targeting VDAC-based peptides to minimize the self-defense mechanisms of cancer cells.

Studies led by Prof. Shoshan-Barmatz demonstrated that the depletion of VDAC1 altered cancer hallmarks, including a rewiring of cell metabolism and pathways for growth and survival that underlie the malignant phenotype. Thus, the team showed that down-regulation of VDAC1 resulted in a multi-pronged attack on cancer hallmarks and is common to cancers like triple-negative breast cancer.

“Thus, a single treatment of depleting cancer cell from VDAC1 resulting in metabolic rewiring and attacked several key components of the tumor including modulating of its microenvironment, epigenetics and genes expression, pointing to its potential as a druggable target in cancer,” Prof. Shoshan-Barmatz says.

“We found that by silencing the expression of VDAC1, this sub-type of breast cancer that is not amenable to endocrine therapy and often exhibits resistance to current chemotherapeutic agents, now expressed all of the above receptors, namely is converted into the more common breast cancer type and thus can be subjected to a variety of highly successful treatment options,” she adds.

Oncologist Dr. Daniel Vorobiof did his internship and residency at the Ben-Gurion University of the Negev in Beersheba, and while he’s not back in Israel, he is the Chief Medical Director of Belong.Life, an Israeli company founded in 2014 by Eliran Malki, current CEO, Irad Deutsch, current-CTO, and Ohad Rubin, current COO. The company does a different kind of cancer therapy — the kind that uses machine learning and AI to provide cancer patients with a social network and mobile app to navigate the difficult experience of dealing with cancer.

The company’s innovations “will always first take into consideration the needs of every cancer patient. There are specific cancer indications that are more common than others, and patients diagnosed with them can easily obtain information within Belong’s apps, as well as from other sources. But there are some less investigated and less supported cancer disease areas, and we have begun investigating those patient populations. As a result of this initiative, we have recently opened a specialized group for patients with chronic myeloid leukemia (CML) which has been very enthusiastically received by the global CML community. This will be followed by other groups in the near future, which are under development at the moment,” he adds.

Meanwhile, Dr. Vorobiof says the company is “open to any future research projects and ideas that doctors or allied disciplines might have in diverse cancer areas. Suggested research might be related to a variety of situations, including appropriate nutrition, the use of complementary or alternative therapies, physical exercise, side effects, mental health, or anything else related to the management of cancer patients.”