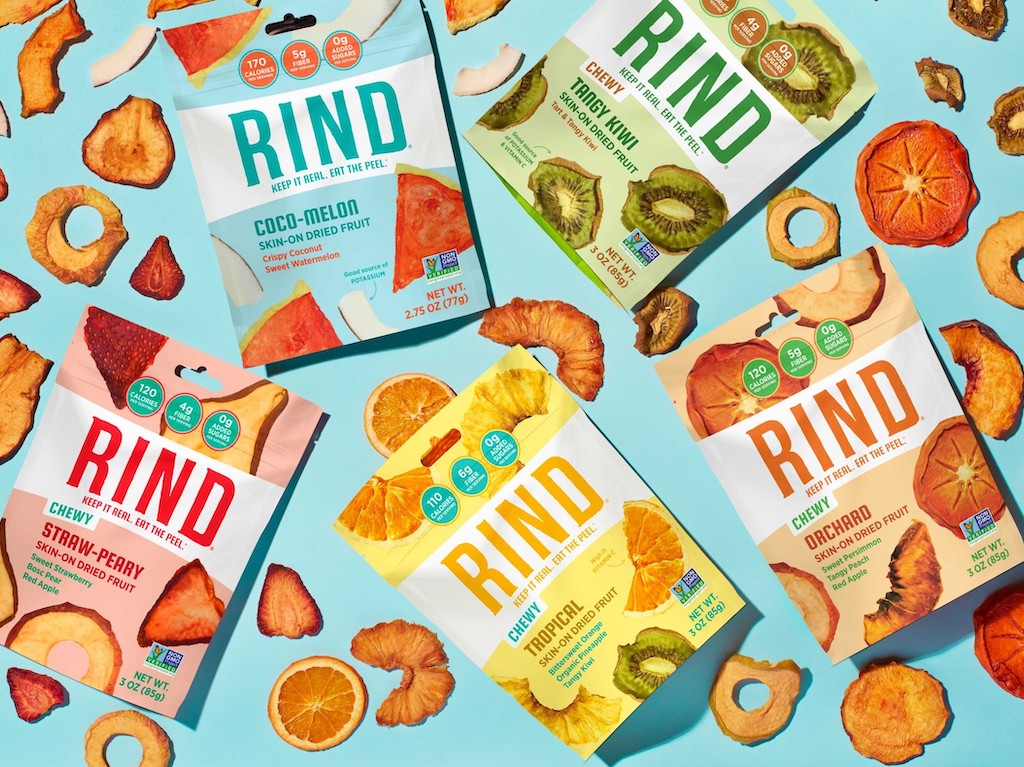 An astounding one-third of all the world’s food is wasted, which amounts to $1 trillion in losses. A rising number of clever food brands across the globe are doing their part to recognise divert food waste from dumpsters or landfills by creating moreish snacks you’ll want to taste.

Sidestream valorisation, i.e. the concept of valuing and making use of waste, is becoming big business, particularly in the food realm, with some folks calling it one of the biggest food trends of 2022. Below, we’ve rounded up some of the best upcycled food and drink brands that also happen to be vegan.

Highlighting the fact that 40% of food goes to waste in the US, the brand saves 38 gallons of water from going to waste for every pound of fruit pulp. These are turned into chips, available in four flavours: salt and vinegar, jalapeño and lime, spicy barbecue, and sea salt.

You can find Pulp Pantry chips in departmental stores across the US and online.

Did the name give it away? Spudsy upcycles sweet potatoes, over 150 million pounds of which, it claims, end up in landfill every year.

Spudsy takes those “imperfect” sweet potatoes and turns them into puffs and fries — and they’re all vegan. The range includes cheddar, cinnamon, barbecue, buffalo, and sour cream and onion puffs, as well as sea-salted, cheese, ranch and hot fries. As of 2021, the company was on track to save 1 million sweet potatoes.

Spudsy’s sweet potato snacks can be found across US retailers and online.

“Cacao is not chocolate,” screams a banner on cacao retailer Blue Stripes’s homepage. It is, the company insists, a superfood. It claims that the chocolate industry wastes 70% of the whole cacao plant, but the fruit and shell surrounding the bean have major nutritional value.

Blue Stripes’s cacao products are available at its Nashville store, Thrive, Whole Foods and Erewhon, as well as its online shop and Amazon.

Hidden Gems is another company trying to find creative ways to use parts of food commonly thrown away. It began with a bowl of guacamole, when the founders realised there were more pits and skin than pulp.

Its first upcycled product is Reveal, a line of avocado seed brews. Described as a mix between iced tea and kombucha, the three flavours are mango and ginger, grapefruit and lavender, and rose and mint.

You can buy Reveal from its online store and various retailers in the US.

Upcycled milk, anyone? Take Two claims to be the first plant-based milk made from an upcycled ingredient — in this case, spent barley.

With a range including sweetened, unsweetened, chocolate and barista barley milk, each gallon of Take Two saves almost 300 gallons of water, 8lb CO2e of greenhouse gas emissions and 3 pounds of spent grain that would be fed to livestock or sent to landfill.

Take Two’s barley milks can be found across US retailers and on its online store.

The clue’s in the name. An homage to founder Matt Weiss’s great-grandmother, who owned a health store since the 1920s, Rind Snacks uses discarded peels and rinds to make dried fruit chips.

With a core range of orange, kiwi and apple chips, plus many different flavour combinations, Rind Snacks has saved more than 120,000 pounds of food waste, as of 2020.

You can find Rind Snacks on its online shop, Amazon, Whole Foods and other stores around the US.

Carrots are the name of the game at Seconds. The company’s name is a nod to second chances, specifically for vegetables that otherwise go to waste.

Seconds makes carrot crackers by dehydrating carrot pulp, peels and other discards and milling them into flour. The three flavours are Original Crunch, Everything Crunch (a riff on everything bagels), and Chipotle Ranch Crunch.

Seconds’s carrot crackers are available on its online store and other retailers in New York.

A post shared by I Am Grounded Co (@iamgroundedco)

Australian brand I Am Grounded deals with upcycled coffee fruit, which is usually considered waste after extracting the beans. The company turns the outer cherry of the coffee plant into vegan energy bars.

The bars are available in lemon and coconut, espresso and tahini, and cocoa and almond butter flavours, all blended with the coffee fruit. Since March 2019, I Am Grounded has upcycled more than 6 tonnes of coffee fruit from Colombia — that’s 5.04 tonnes of carbon dioxide diverted.

I Am Grounded’s products are available in retailers around Queensland and ships internationally via its website.

Upcycled pasta! ReGrained’s co-founders learnt to brew beer in college and were left with a pound of brewer’s grain (malted barley) for every six-pack. They started ReGrained as a way to make beer for free, by baking bread from the grain created. But they soon realised there was a lot more potential.

They call the ingredient SuperGrain+, and have three ranges of products: superfood bars, puffed snacks, and pasta. The latter is the latest launch, in collaboration with artisanal pasta maker Semolina.

You can buy ReGrained’s strozzapreti pasta and more through its online marketplace.

Renewal Mill aims to upcycle all kinds of food manufacturing byproducts, but its first foray is with plant-based milk production. The brand dries the leftover pulp from soy, almond, pea and oat milk and mills it into baking- and cooking-friendly flour.

Renewal Mill’s products can be found online on its store and other retailers, including Amazon.

Another cacao fruit-focussed brand, CaPao upcycles the pulp and husk into nutritious snacks. With 100% recycled packaging and a fully wind-powered manufacturing plant, the brand is delivering on its sustainability promise.

The products include cacao fruit bites and quinoa squares. Both lines come in three flavour combinations and are fully-plant based.

CaPao is available in various US retailers and via its online store.

Broken, misshapen, too big, too small, off-colour — all descriptors that cast berries out of retail and into wastelands. Oswald Co takes these berries to make chia jams. It terms it a “smash” because, in the US, the FDA asks for at least 55% of sugar to call it a jam, preserve or jelly.

These upcycled chia-berry jams use dates and lemons as the only other ingredients. Currently, the brand offers four flavours: strawberry, raspberry, cherry-pomegranate and wild blueberry.

Chia Smash can be found across the US at farmers’ and food markets as well as Whole Foods, plus online.

On to tortilla chips, then. Water conservation is at the heart of tortilla chip maker Kazoo, which upcycles corn germ that would otherwise go to animal feed. This means less corn in the actual tortilla chip, as each bag is made with 40% upcycled corn germ and saves 20 gallons of water (as compared to 100% new growth corn).

Currently, there are three products: bite-sized, restaurant-style and lime zest-flavoured. Kazoo aims to conserve 1 billion gallons of freshwater by 2025.

You can find Kazoo’s tortilla chips at Hy-Vee and Market of Choice (and soon at Whole Foods and Amazon).

A tongue-in-cheek reference to the “ugly” produce rejected by supermarkets, The Ugly Co urges people to “never judge a fruit by its cover”. It was started by a fourth-generation farmer whose previous job had him haul “ugly” fruit from farms to disposal sites.

You can find The Ugly Co in many US retailers as well as online.