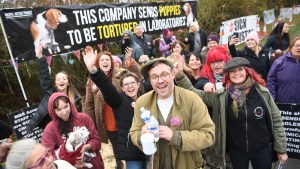 Yesterday (November 16), musician Will Young handcuffed himself to the gates of a puppy breeding facility in a protest against animal testing.

The British entertainer locked himself to the steel gates of the Marshall Bioresources (MBR) Acres research site in Huntingdon, Cambridgeshire.

There, thousands of beagle puppies are bred for biomedical research. MBR says these experiments help produce “life-saving” treatments for humans. It has been running such operations for more than 80 years.

But not everyone agrees that the testing is justified. Campaigners say the puppies, who are sent to animal testing laboratories at around 16 weeks old, suffer tremendously during the experiments.

“These beagle puppies will be used in the most horrific and unnecessary experiments for toxicology testing, in which tubes will be rammed down their throats and masks forced over their faces to ingest and inhale lethal doses of toxins,” the group writes online.

“They will be given no pain relief, blood will be taken out of their tiny veins every hour, they will vomit, blood, excessively drool, shiver from changes in body temperature, and cower at the back of the cages.”

Many of the puppies are killed at six months old.

Young joined Camp Beagle protesters at the MBR facility. He was photographed alongside the protesters with a sign that read: “Cambridgeshire. Famous for beagle torture. Thanks to MBR.”

The 42-year-old posted about the issue online. “I spent today at the gates of MBR Acres in protest of their testing on beagles. I wanted to raise awareness of animal testing and the fact that this is a puppy farm that farms over 2,000 beagle puppies a year to be sent out to their inevitable torture and death,” Young wrote.

“People do not know about it in this country and that is why I’ve handcuffed myself to the gates.”

The post Will Young Handcuffs Himself To Puppy Breeding Facility To Protest Animal Testing appeared first on Plant Based News.