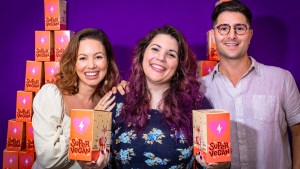 Vegan investment group Veg Capital has made its first funding partnership in Brazil with Super Vegan, a plant-based chocolate brand.

It comes as the brand is scaling up production with new facilities and equipment – and even eying global expansion.

Since its inception three years ago, Super Vegan now has 11 plant-based chocolate offerings, such as Cookies and Cream, White Strawberry Chocolate, and Vanilla and Nougat. They’re all made with plant-based milk including coconut and rice, as well as ethically sourced nuts and cocoa butter. The idea behind the brand was to create the perfect vegan alternative to white chocolate, which is usually made with dairy. As a result, Founder Juliana Salgado Gaze began making her own in her kitchen and sharing it among friends. Now, she sells her chocolates online and in Brazilian markets and coffee shops.

Veg Capital invested in the company last year alongside Crica Wolthers, with a view to helping Gaze expand the business. It’s the company’s first investment in Brazil, and hopes are that it will allow Gaze to propel Super Vegan to produce 10 times the sales across the next 12 months. Moreover, the funding will help Super Vegan reach more people around the world. This will begin in other Latin American countries, and plans are for European exports to follow in 2022. Additionally, Veg Capital says it hopes to invest in more Brazil-based plant-based businesses in the future. You can view Super Vegan’s products here The post Vegan Investment Group Makes First Funding Move In Brazil With Plant-Based Chocolate Brand appeared first on Plant Based News. plant-based plant based nasdaq-bynd milk cream alternative veg capital funding investment