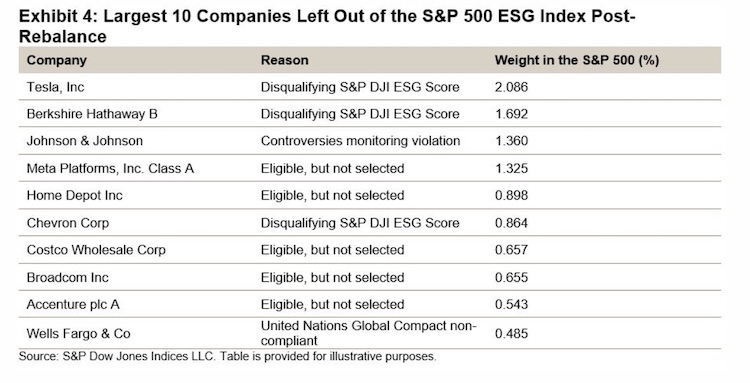 As Tesla found out on Thursday, it’s getting harder for companies to not walk the talk when it comes to ESG commitments.

Tesla was booted out of the S&P 500 ESG index as part of the benchmark’s annual update.

Standard & Poors, the gatekeeper for the index, cited Tesla’s “lack of a low-carbon strategy” and “codes of business conduct” as amongst the reasons it kicked the EV maker out.

S&P also said that racism and and poor working conditions reported at Tesla’s factory in Fremont California had affected its ESG score adversely.

In addition, the index company criticised Tesla’s poor handling of a probe into deaths linked to its driver-assistance systems. In November last year, two people were killed as a driverless 2019 Model S Tesla went off-road and hit a tree in Texas.

An incident has also been reported in Australia last week, when a man in Melbourne claimed his Tesla car was on Autopilot when it veered out of control.

Here’s what Tesla’s CEO Elon Musk has to say about getting the boot.

ESG is a scam. It has been weaponized by phony social justice warriors.

And here’s the top companies that got kicked out by S&P this year:

Back on domestic shores, corporate regulator ASIC and market operator ASX are also about to make life harder for listed companies.

At the Governance and Risk Management Forum on Tuesday, both ASIC and ASX announced they will probe climate change impact disclosures of listed companies in the coming year.

ASIC commissioner Sean Hughes said he wants to make sure investors are being appropriately informed.

“We think misrepresenting products in this case as green when they are not poses an issue,” Hughes said.

ASX chief compliance officer Janine Ryan also said she was concerned about the lack of adequacy in ESG disclosures from listed companies and funds.

“We see companies tripping themselves up there in disclosure in non-binding MOUs and letters of intent, often overstating the conditionality of the arrangements there,” Ryan said.

“In some instances we’ve seen the share price move materially on an announcement that’s not on the market. If that happens it may result in some corrective action,” she added.

It’s a sign of things to come, and to discuss about it in depth, Stockhead has reached out to ESG expert, Ben Swan.

Futureproof Consulting is a company that specialises in helping companies get their ESG and sustainability programs off the ground.

Based in Perth, Futureproof helps clients identify priorities around their ESG program. Clients come from various industries, including mining.

Swan is a former Cambridge postgraduate student who spent a number of years at Unilever in London prior to founding Futureproof.

What are your thoughts on the latest ASIC and ASX move?

“It absolutely needs to happen, and it’s beneficial for looking at how Australia should play its part in this international effort,” Swan told Stockhead.

“One thing that needs to come out of this is that regulators will need to be clear about what the disclosures and best practice look like.

“One of the key criticisms from investors is that ESG data has been inconsistent and unreliable, and it doesn’t form an adequate base to be able to compare companies’ ESG performance.

“So I think being clear about what the expectations are from a regulatory perspective will be a really a good step forward to addressing those challenges.

“But to me, it was always a matter of time until we see some sort of mandated disclosures around climate risk from one of the Australian regulators.

How will the ASIC and ASX impact ESG investors?

“I’m not sure it will be that huge for investors,” said Swan.

“I speak to a lot of them in my job, and they in general have their own analysis tools they already use because investing is a dark art.

“People have their own focus areas they like to do analysis on. So I think investors have already built those up to an adequate level.”

What about the impact on companies that are disclosing?

“When regulations do come, we’ll probably see the concept of ESG minimum scores becoming table stakes for Australian companies, and this will just be part of what you disclose as a business,” Swan explained.

“I think the types of business, the products and services that you’re producing will probably become more and more important going forward.

Will regulations stop the act of greenwashing?

“But given the large amounts of ‘green capital’ looking for a home, particularly coming out of Europe, there’s always going to be companies who are overstating their credentials in the form of greenwashing,” said Swan.

“One example close to home is Santos who’s currently being sued by NGO activists, who are taking them to court for their net zero pledges.

“Santos had made a commitment to reach net zero by 2040, however the activists have challenged them on these pledges based on their big Barossa gas project.”

When will we see ESG disclosures being mandated in Australia?

“From a local perspective, I think we’re seeing various standard setting and regulatory bodies trying to feel their way into what the appropriate level of guidance is,” Swan said.

“Whether it’s ASIC, ASX, or ACRA – all of those organisations are quite happy to let a lot of these disclosures be performed on a voluntary basis at the moment.

“But a really interesting new development was from the Australian Accounting Standards Board, who are now trying to ascertain where Australia fits into the global picture

“But in general, I think regulators have taken a passive stance.

“And I think it’s wise for Australia to see where the dust settles in terms of where international standards are going to be, to then confidently align to those when they’re established.”

Other ESG news on the ASX this week

Emerging Indonesian nickel pig iron producer, Nickel Mines, inked a deal with Quantum Power Asia yesterday for the implementation of a 220MWp solar project, to be located within the company’s 80pc Hengjaya Mine area, where its new four-line RKEF project Oracle Nickel is under construction.

This move expands upon the binding memorandum of agreement signed with Indonesian solar development company, Sesna, in January, 2022 for a 200MWp solar project to be built within the Indonesia Morowali Industrial Park (IMIP) – where the Hengjaya mine is located.

Worley is progressing its strategic partnership with Avantium Renewable Polymers to the next phase after signing a ‘technology cooperation agreement’ to develop a world-first commercial scale renewable plastic facility in Delfzijl, the Netherlands.

Dubbed the ‘Avantium flagship facility’ and expected to produce up to 5,000 kilo tonnes of plant-based furandicarboxylic acid (FDCA) annually, the two entities will work together to deliver engineering, procurement, and construction (EPC) services

Following the approval of Woodside shareholders at its annual general meeting yesterday, the company has changed its name from Woodside Petroleum to Woodside Energy Group and is set to begin trading on a new ticker code – WDS.

The change will take effect from Wednesday, May 25.

The post The Ethical Investor: Tesla is out, ASIC and the ASX want in. We talk to Futureproof’s Ben Swan on what lies ahead for ESG appeared first on Stockhead.