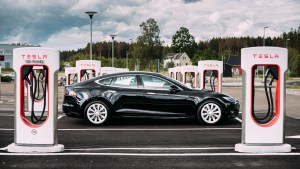 Electric car giant Tesla has been at the brunt of criticism for its vegan leather seats following a set of customer complaints.

It was announced in 2019 that inside the vehicles, a “premium” synthetic leather will be used instead of animal skins.

This is used on the steering wheel and headrests.

But customers are reportedly disappointed with the quality of the animal-free material, in claims it is becoming deformed and bubbled.

A chemical reaction caused by heat inside the vehicles is reportedly causing the upholstery to expand.

But Tesla maintains that the bubbling is in fact caused by the leather reacting to lotions, hair sprays, and sanitizers instead.

It also claims it is not liable and that the issue is not a manufacturing defect, other media outlets report.

According to The Times, a “significant” number of imported vehicles are now being fitted with leather from animals.

Car owners are now kicking back against Elon Musk’s company and allege it is failing to address the problem.

Despite the cars being covered with a warranty, it is the headrests in particular that customers are reporting to be defective. They cost hundreds of pounds to replace.

Tesla is not alone in utilizing vegan leather in its vehicles. But it’s the first time such bubbling of the fabric has been widely reported.

Volkswagen announced it would roll out a vegan leather interior made from apple skins for its electric SUVs.

BMW revealed it would use a plant-based leather called MIRUM earlier this year, which is made from by-products of other industries. This includes coconut husk fiber, left over from coconut oil production.

According to BMW’s venture capital firm, BMW i Ventures, the product “performs on par” with animal leather.

Furthermore, Mini announced it would ditch leather from all future car interiors in a bid to become more eco-friendly. Plus, the fabric is 100 percent recycled.