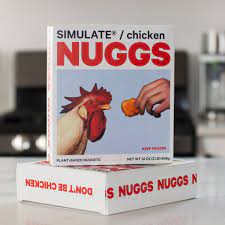 New York-based Simulate today announced a $50 million fundraise. Led by Alexis Ohanian’s 776, the Series B brings the meat alternative’s total funding to north of $60 million and values it at $260 million.

Simulate’s first product, Nuggs (formerly also the startup’s name), has already caused a splash, thanks in no small part to aggressive online advertising. The company notes a massive push in retail availability in the last six months. The chicken nugget alternative was available direct to consumers through online ordering when it launched in Summer 2019 — availability that moved the needle during U.S. shutdowns over the past year.

“During the height of the pandemic, people really wanted frozen food shipped directly to their door,” founder and CEO Ben Pasternak tells TechCrunch. “At the time, we were DTC only, so we saw a lot of growth there prior to our pivot to retail.”

He adds that the majority of the company’s sales now currently come from retail, due to accessibility and more restrictive DTC pricing. Currently, the product is available in 5,000 retail locations, a list that includes pretty massive retail names like Walmart/ Sam’s Club, Target and Whole Foods.

“We are getting ready to launch in restaurants and in fast food,” says Pasternak. “Internationally, we recently launched across Canada, and have plans to expand to other countries too.”

Funding will also go toward expanding the company’s headcount. Currently at 20, Simulate expects to expand employment to 50 people by 2022. “Over half of that expansion will be focused on growing our engineering team,” Pasternak says.

Nuggs rebrands as Simulate with new cash, a new CTO and an expanded line of faux-meat foods