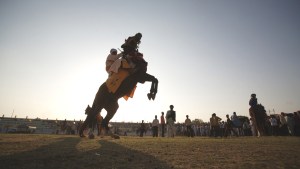 A Korean production company has come under fire after a horse died in a stunt on the set of period drama The King of Tears, Lee Bang-won.

The scene in question features a character who accidentally falls from his horse — the animal died a week after filming the sequence.

Animal rights campaigners across the country are in uproar — branding it “animal abuse.”

KBS1, the broadcasting network that screens the series, claimed there were no apparent injuries to the horse at the time of shooting.

The episode which features the scene aired last month, on January 1.

Horror over tragic incident on set

According to The Korea Herald, it read: “We feel deeply responsible and apologize for the accident that occurred during filming.

“During filming, the actor fell far from the horse and the horse’s upper body hit the ground hard.”

After the stunt, the horse reportedly got up and displayed no visible signs of injury.

However, according to the Korean Animal Welfare Association (KAWA), the horse was tied up and “purposefully” tripped.

It alleges the production team performed the stunt in a “dangerous manner” and that the actor was also in danger of suffering significant injuries.

She added: “This horse broke his neck after his legs were tied with rope and he was intentionally tripped to create a dramatic fall scene.

“The show’s producers must face not only the court of public opinion but also a court of law, because this is willful cruelty.

“There is no excuse for using animals as ‘unpaid talent’ and risking their lives for the sake of a television series.

“Computer-generated imagery has made the exploitation of animals on-screen obsolete. And any production still using animals will soon find itself canceled.”

Moreover, PETA Asia is now calling for a ban on horse tripping. Following the fatal horse stunt on The King of Tears, Lee Bang-won set, the organization is writing to film producers and government officials to strong-arm urgent action.

A petition was quickly launched calling KBS1 out for alleged abuse.

“I cannot believe that the public broadcaster KBS run by viewers’ license fees did not have specific measures or policies for the safety of the animals,” it exclaimed.

The petition, held on Cheong Wa Dae, has so far garnered more than 120,000 signatures, The Korea Herald adds.

As a result of the controversy, KBS1 released another statement. And, put the screening of The King of Tears, Lee Bang-won on hold.

“The two episodes scheduled to air this Saturday and Sunday will be canceled,” an official confirmed.