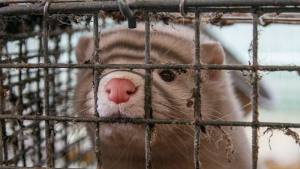 In a monumental vote, Italy is set to implement a permanent ban on fur farming throughout the country. Its ten remaining mink fur farms are slated to close within six months.

Yesterday, the Budget Committee of the Italian Senate voted to approve a modified version of an amendment to the budget law.

The changes immediately outlaw the breeding of fur-bearing animals, including mink, foxes, chinchillas, and raccoon dogs.

Further, the Ministry of Agriculture will provide funds to farmers affected by the ban, putting a total of €3 million aside for this purpose.

According to animal protection organization Humane Society International/Europe (HSI), Parliament’s official approval of the ban is expected to go through by the end of the year.

Consequently, Italy will become the 16th country in Europe to end fur farming.

A myriad of Italian fashion designers have already made similar commitments, by removing fur from their designs, runways, and magazine covers. Armani, Gucci, Prada, Valentino, and Versace have all ditched fur from their lines.

Meanwhile, ELLE magazine in Italy pledged to never work with or advertise the animal product again; the fur-free policy applies to all of ELLE’s editions around the world.

A victory for animals

Animal rights advocates have welcomed the news with open arms.

Hon. Michela Vittoria Brambilla is president of the Parliamentary Intergroup for Animal Rights and of the Italian League for the Defense of Animals and the Environment.

In a statement, they said: “In thirty years of animal rights battle this is the best victory. Finally, a parliamentary vote sanctions the end of unspeakable suffering inflicted on animals only in the name of profit and vanity … better late than never.

“Now we await the final approval of the budget law, but the political will has been clearly expressed. A dream comes true that animal protection associations have cultivated for decades in our country … It is a great achievement, which finally all those who love and respect animals rejoice!”

“This is a historic victory for animal protection in Italy, and HSI/Europe is immensely proud that our fur farm conversion strategy has played a central role in dismantling this cruel and dangerous industry in our country,” Pluda said, referring to HSI/Europe’s recent report on mink breeding, which outlined the risks of the trade and pathways to phase it out.

As well as being rife with animal cruelty concerns, fur farming has been linked to multiple outbreaks of COVID-19. As of this month (December, 2021), such outbreaks have been confirmed on 465 mink farms in 12 countries, including Italy.

“There are very clear economic, environmental, public health and of course animal welfare reasons to close and ban fur farms,” Pluda continued. “[This] vote recognizes that allowing the mass breeding of wild animals for frivolous fur fashion represents a risk to both animals and people that can’t be justified by the limited economic benefits it offers to a small minority of people involved in this cruel industry,”

“With so many designers, retailers and consumers going fur-free, conversion of fur farms offers people a sustainable future that the fur trade simply cannot provide.”

The post Italy Passes ‘Historic’ Ban On Fur Farming, Its Last Active Farms To Close In 6 Months appeared first on Plant Based News.