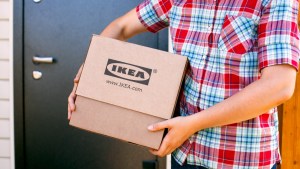 Swedish furniture giant IKEA has announced it will phase out plastic packaging within the decade.

This is part of a wider drive to transform packaging across the industry and reduce waste and pollution.

It comes as the store has already made plastic reduction efforts. Currently, less than ten percent of its total volume consists of plastics, the company announced in a statement.

Now, it’s aiming to champion renewable and recycled materials in its sustainability push. It comes as the giant spends a staggering one billion euros on 920,000 tons of packaging material each year.

Erik Olson is a packaging and identification manager at IKEA of Sweden.

They said: “Phasing out plastic in consumer packaging is the next big step on our journey to make packaging solutions more sustainable. And, support the overall commitment to reduce plastic pollution.

The shift will happen progressively, Olson added, and focus on using paper instead.

IKEA hopes to become an industry leader in its eco-friendly packaging efforts.

With it being the world’s largest furniture retailer with more than 500 stores across the globe, it aims to use its size to “have a positive impact” beyond the supply chain.

Other shopping titans are lagging in their packaging reduction, falling foul to criticism from environmental groups.

A major one is Amazon, after conservation group Oceana came out with claims the online store’s plastic waste had soared by 29 percent over the pandemic.

Now, Oceana is calling for the retailer to phase out single-use plastic entirely.

Elsewhere, Amazon has been commended since recently announcing a plastic packaging reduction in Germany, and replacing with paper and cardboard by the end of this year. Similar operations will be rolled out in France too.

The post IKEA To Slash Its Plastic Packaging By 2028 To Help The Environment appeared first on Plant Based News.