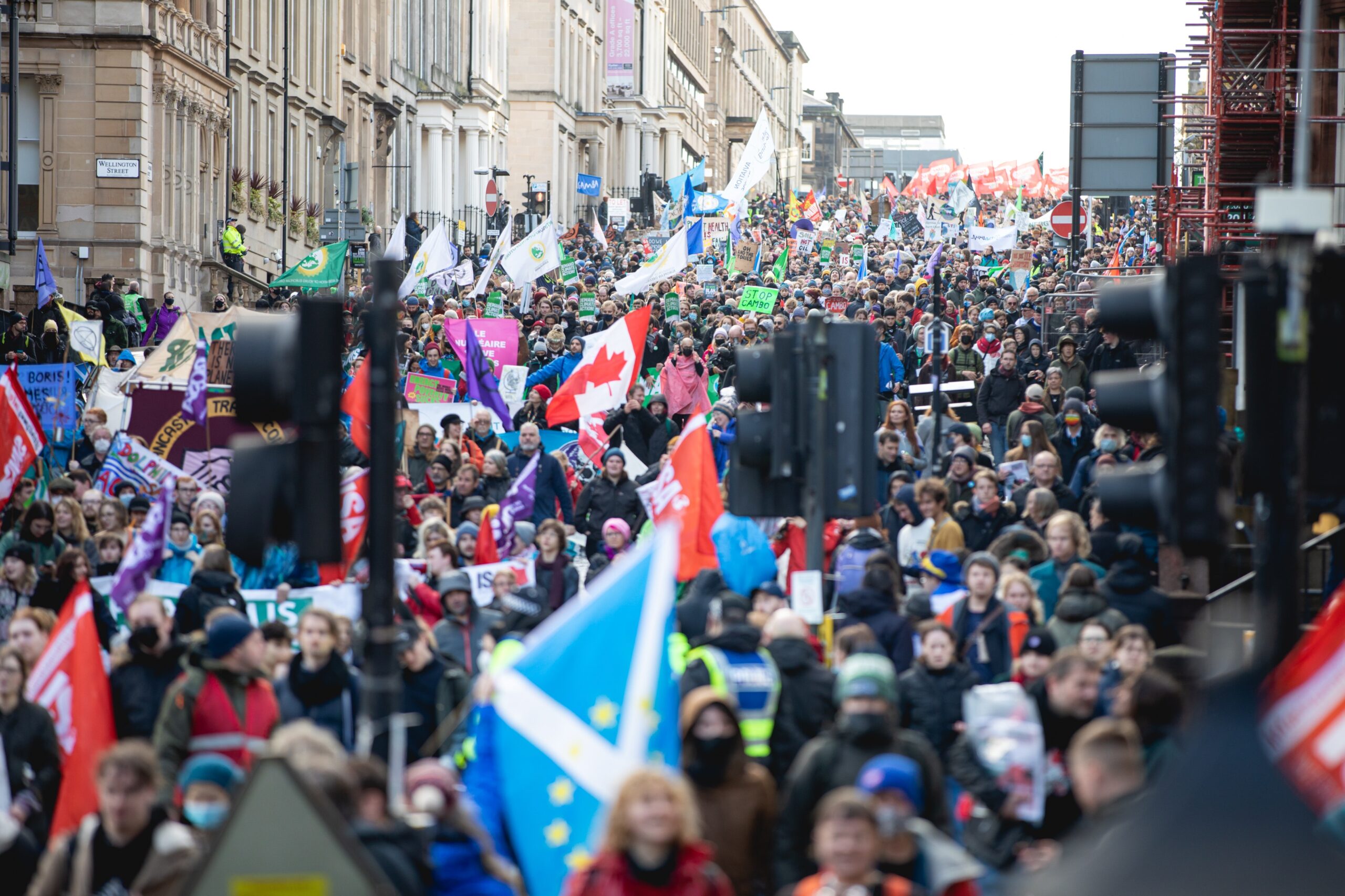 The last few years have seen a surge in climate protests. From Turkey and Germany to the US, Australia and countries across Africa, local activists have fought corporate actions that threaten to destroy precious green space and accelerate global warming.

Consider the protest march that took place in Glasgow on 6 November 2021, during the UN climate conference COP26. As a huge range of different groups marched together to demand action on global warming, they waved banners drawing attention to issues such as greenwashing, housing crises and trade unions.

Through taking part in this march, protesters may have begun to see themselves as belonging to a wider, shared identity – one that specifically stood in opposition to climate destruction. This identity was reinforced by songs and chants, such as the words “power to the people because the people have the power”, that rippled out across groups along the march route.

This inclusive identity, based on fighting inequality, could also be seen in the solidarity between climate protesters at COP26 and binmen striking for better pay.

People who reduce their plastic use, use low-carbon transport like bicycles and eat a plant-based diet are often called “environmentalists” as a result of their behaviour. Interestingly, this relationship could also run in reverse.

Perceiving yourself as part of the “environmentalist” social category – by identifying the environmentally friendly beliefs you share with that group – could help drive sustainable behaviour, crucial in the face of climate change.

However, for these behaviours to really have any influence, our research suggests they need to endure over time. For that to happen, it’s important to have the opportunity to express your new shared identity in different social contexts.

This can be achieved by forming relationships with others who consider themselves part of an environmental community, increasing the prominence of environmental issues in your life and therefore the chance that your sustainable behaviour will continue behind closed doors.

Based on ours and others’ research on psychological change and collective action, it seems that what benefits protesters also benefits society. When protesters encourage reducing consumption and becoming more climate-conscious, we all – along with the environment – profit from it.

Some have suggested that protests can alienate people through, for example, actions which disrupt daily life (creating traffic jams receives particular criticism). And politicians have called protests counterproductive, while emphasising that “real work” on climate happens within conferences and boardrooms.

But we’d argue that protests are an effective tool, even when they’re disruptive. Seeing others take action increases our hope for the future as well as offering an opportunity for vicarious empowerment – motivating people in other places to take similar action, even when they haven’t physically participated in the original protests.

By seeing protests, directly or through media, bystanders can come to identify with protesters, possibly increasing their belief in their own power to cause social change.

This can create a positive feedback loop. Researchers have found that emissions decrease in US states with large numbers of environmental protests. Polling from YouGov also reported a significant rise in the number of British people concerned about climate following Extinction Rebellion’s early 2019 protests in London.

Protests can also help achieve policy change if the policy being protested is already under public discussion – and if protesters have support from politicians. And in countries where politicians are elected based on public opinion, protests that increase environmental awareness can encourage change through altering people’s voting habits.

For example, it’s likely that climate protests across Germany helped in part to double the number of voters for the climate-conscious Green Party from 2017 to 2021.

Protests have even managed to change court decisions. Forest occupations in Sweden and Germany resulted in courts saving the forests from destruction (for now). The value of protests should not be disregarded: they could have a larger effect than events behind closed doors.

Sara Vestergren and Yasemin Gülsüm Acar do not work for, consult, own shares in or receive funding from any company or organization that would benefit from this article, and have disclosed no relevant affiliations beyond their academic appointment.