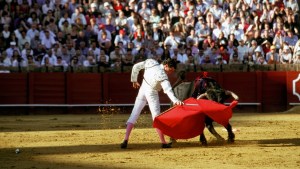 The state of Sinaloa in Mexico has become the fifth in the country to outlaw bullfighting, classifying it as animal cruelty.

Campaigners are celebrating the decision, which was agreed upon unanimously.

Sinaloa follows Sonora, Guerrero, Coahuila, and Quintana Roo in ending the cruel practice. However, there are 27 states remaining that still allow it.

Bullfighting kills around 250,000 bulls every year around the world. Alongside much of Mexico, the industry operates in Spain, France, Portugal, Colombia, Venezuela, Peru, and Ecuador.

As part of the “fights,” the human “bullfighter” or matador is tasked with killing the animal in front of a crowd.

According to Humane Society International, it is an “agonizing death.” This is because the matador often misses the target, which is between the bull’s shoulders.

But now, in Mazatlán, the only town in Sinaloa that still holds the fights, they will no longer take place. And that’s because the Congress of Sinaloa has approved an initiative to stop it.

Moreover, animal welfare has been ramped up with higher fines now imposed for acts of cruelty.

Humane Society International/Mexico sent a statement to PBN on the news. Animal cruelty program manager Felipe Marquez explained: “This is an important reform in Mexico.

“Because, it reflects the views and sentiments of the majority of Mexican citizens who believe that bullfighting should be banned.

“We cannot hope to tackle violence in our society if we still allow animals to be stabbed to death for our entertainment.”

The comment is in light of an almost decade-old study that ascertained 73 percent of Mexicans are in favor of banning bullfighting.

The post Bullfighting Banned In 5th Mexican State As Part Of Animal Welfare Reform appeared first on Plant Based News.

BREAKING: First-Ever Vegan And Gluten-Free Chocolate Wafer Launched In The US

Italy Bans Slaughter Of Male Chicks, Sparing Up To 40 Million Birds A Year