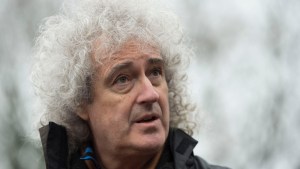 Vegan musician Brian May has spoken out about the “appalling” abuse of turkeys during the holiday season.

The lead guitarist and co-founder of Queen took to social media to express his disgust at the tradition of eating birds for Christmas.

May, who is also an astrophysicist, reposted a video from Plant Based News (PBN), whereby a live turkey peers into an oven and sees a fellow bird being cooked.

He also shared a screenshot of PBN’s caption on the post, which highlights the sentience of the species, and the fact that roughly 46 million turkeys lose their lives in the lead up to Thanksgiving. And that’s just in the US.

“This sad video has haunted me the last few days. You don’t have to be a vegan to be appalled by the gross abuse of these birds every year at this time,” May wrote to his 2.9 million Instagram followers. He also shared it to Twitter, where he has an additional 1 million followers.

“There are so many great ways to make your Christmas roast dinner delicious these days. I’ve been quite sickened by the endless advertising images of these poor dead animals on our TV screens over the last few weeks,” the musician continued.

May said it appears the animal-based food industry has become “desperate” over the idea that society will realize “this is one tradition we really don’t need to follow.”

“At our house we’ll be looking at a succulent plate of roast parsnips, roast potatoes, done in healthy olive oil, Brussels sprouts, cauliflower, and probably some extras like asparagus, Jerusalem artichokes, chestnuts, leeks, and always roasted onions,” May said.

“I can’t tell you how much better it will feel at the end of Christmas day NOT to have had that old fashioned dead bird centerpiece – unhealthily animal fatty, ugly, dry, and its production bad for the planet. And above all, for me, it will be a cruelty-free Christmas.”

He concluded his message with the words: “IT’S NOT TOO LATE TO LEAVE THE DEAD BIRD OFF THE PLATE.”

May adopted a plant-based diet in 2020 after participating in Veganuary. Since then, has repeatedly used his huge platform to raise awareness about animal exploitation.

For instance, in February, the star joined Ricky Gervais, Judi Dench, Leona Lewis and more in urging the UK to ban the sale of fur.

The post Brian May Calls Out ‘Appalling’ And ‘Sickening’ Abuse Of Turkeys Over Christmas appeared first on Plant Based News.