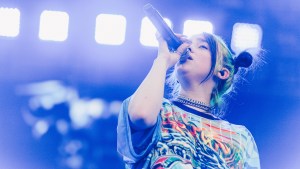 Vegan pop icon Billie Eilish has kicked off her latest world tour. Featuring music from the songwriter’s 2021 album, Happier Than Ever, the concerts also boast an eco-friendly twist.

During the international tour, Eilish will champion various environmental organizations, and encourage fans to take a pledge to eat more plant-based foods.

Part of this involves bringing BIPOC and women-led sustainable initiatives to center stage.

The seven-time Grammy award winner is performing across the US, Canada, UK, Europe, Australia, and New Zealand aka Aotearoa this year.

Along the way, Eilish is spreading an eco-friendly message through the inception of Billie Eilish Action Village. It will host and support minority environmental organizations, including Support + Feed.

With Support + Feed, the musician announced the launch of The Pledge, which encourages attendees to eat one plant-based meal a day for 30 days.

It also includes a partnership with environmental non-profit, REVERB – that claims to have removed 287,000 tons of CO2 from the atmosphere so far.

The Happier Than Ever tour is part of REVERB’s Music Climate Revolution program. This works to not only reduce the tour’s overall environmental footprint but also supports initiatives eliminating greenhouse gases.

It is these combined efforts that make the tour “climate positive,” meaning it goes beyond achieving net-zero carbon emissions and actively removes carbon dioxide from the atmosphere.

Eilish’s Happier Than Ever tour launched yesterday, on February 3.

And along with the aforementioned eco-friendly partnerships, Eilish has enlisted vegan brand Wicked Kitchen to help aid Support + Feed’s vital efforts. The organizations will supply 100,000 plant-based meals to help people in need.

In a statement, co-founder Chad Sarno said: “There is no better time than now to do what we can to alleviate the suffering in this world.

“…That starts with any positive impact we can support within local communities.

“This sense of urgency that Wicked shares with Support + Feed is the driving force of our partnership. And, will be amplified with the power of plant-based food distribution.”

It’s not the first time Eilish has championed climate-friendly choices on tour.

For example, REVERB also partnered the singer on her Where Do We Go tour. This included the offering of free filtered water refill stations.

Eilish spoke on Jimmy Fallon back in 2019 about making the tour “as green as possible.”

Here, she said: “There are no plastic straws allowed, the fans are going to bring their own water bottles.

“There’s going to be recycle cans everywhere. Because it’s like, if something’s recyclable, it doesn’t matter unless there’s a recycle bin.”