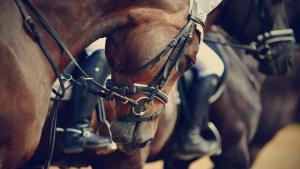 An award-winning racehorse, once ridden by Frankie Dettori, has been put to death after suffering a severe pelvic injury. She is one of thousands of horses in the racing industry that are euthanized or die prematurely.

The four-year-old filly (a horse that is too young to be considered a mare) had multiple accolades to her name. Snowfall had won the 2021 Epsom Oaks, Irish Oaks, and Yorkshire Oaks, beating various older horses in the process. According to the Racing Post, she had earned £885,696 in prize money.

The young animal became injured “a few weeks ago,” her trainer Aidan O’Brien said to the publication.

“Despite the best care and attention from our veterinary team and from our team here in Ballydoyle, her condition seriously deteriorated a couple of days ago and we were left with no choice but to take the heartbreaking decision to have her put to sleep,” O’Brien said.

It’s unclear exactly how Snowfall became injured. The racing team’s vet, John Halley, expects that she “did the splits” in her enclosure and injured herself.

“But obviously we don’t know exactly how it happened,” O’Brien said.

In 2019, Halley was sued by a horse owner who accused him of negligence. However, the judge ruled in the veterinary surgeon’s favor, claiming there was insufficient evidence to support the plaintiff’s case.

Deaths in the horseracing industry

“I’ve ridden 21 British Classic winners in my life but I have never ridden an easier one than her in the Oaks,” he said. “It was just unbelievable … She was at her peak and just brilliant. She went through the field like a hot knife through butter.

“In this day and age, I don’t think we will see a performance like that again. I don’t expect to ever win another Classic like that in my life.”

Snowfall is among the growing number of horses who have lost their lives in the racing industry. Exact global data is not available, but losses are recorded around the world.

In a one-year period ending on July 31, 2021, at least 149 horses were killed on Australian racetracks.

The UK sees around 190 racehorse deaths a year, and in the US, 500 to 800 racehorses are injured and die every year.

Some of the animals die during races, while others sustain injuries that are deemed unprofitable to treat.

Sal Sinatra, director of racing at Philadelphia Park, previously told the Post-Gazette that racehorse injuries are “like totalling a car. You decide to have it totaled because it’s not worth the repair.”

Last year, a BBC investigation uncovered that thousands of horses are sent to slaughterhouses after underperforming on the track. From 2019 to 2021, the organization discovered 4,000 former racehorses had been slaughtered in Britain and Ireland alone.