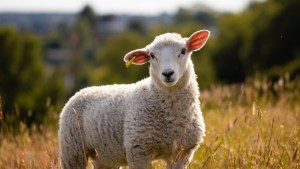 In a report aptly named Shear Destruction, the Center for Biological Diversity and Collective Fashion Justice’s “Circumfauna” initiative assesses the sustainability of wool compared to other materials. Researchers identified wool production as a key contributor to biodiversity loss and climate breakdown.

The well-designed publication was put into the trusted hands of mission-aligned branding, content, and venture agency Very Good Looking. In turn, it got decorated creative Ari Liloan on board to breathe life into the facts and figures. The result? Beautifully crafted, double-edged illustration work.

But if the design pulls you in, it’s the solid research work and drastic findings that make you stay.

“Nothing about wool is sustainable,” said population and sustainability director at the Center for Biological Diversity, Stephanie Feldstein. She is also co-author of the report.

Feldstein finds clear words: “The industry has been pulling the wool over our eyes for decades, claiming that wool is a sustainable fiber.”

According to the report, nothing could be further from the truth.

“There’s nothing natural about this inefficient, unsustainable and exploitative industry.”

In pursuit of a better fashion future

“Cutting through the wool industry’s well-funded mythology is no easy task,” says Joshua Katcher, founder of the Circumfauna initiative and co-author of the report.

“We need to have an honest discussion about wool’s outsized impact and transition to plant-derived and high-tech materials that don’t take such a big toll on native species and the climate.”

Those behind the paper are calling on the fashion industry – including associations, brands, and designers – to reduce wool use by at least 50 percent by 2025. This is with a view to bolster “material innovation and embrace alternatives that do not depend on fossil fuel-derived fibers.”

All in all, Shear Destruction is a well-researched and knowledgeable read, but it’s also a wake-up call.

According to the authors, both industry and consumers need to acknowledge the harms to biodiversity, the climate, and — last but not least — the animals caused by wool and the sustainability language used to hide the uncomfortable truths, as laid open in the report.

This article was republished with permission from Antagonist, of which Eric Mirbach is founder and creative director. Antagonist aims to accelerate a movement rooted in “radical kindness,” and explores ethical food, fashion, travel, lifestyle, art, and design.