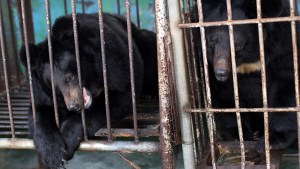 Nine bears are set to be liberated from several factory farms, also known as bile bear farms, in Vietnam. This will be World Animal Protection’s largest rescue for 30 years.

All animals are at least 17-years-old and have spent their entire lives in tiny barren cages on the ranches.

But now, the animal rights organization has confirmed that they’ll be able to roam free at the Four Paws animal sanctuary in Ninh Binh.

What is bear bile farming?

Bear bile farming is an established industry in Asia, with more than 10,000 bears currently in captivity.

Here, bile is frequently extracted from the livers of live bears to be used in traditional Chinese medicine.

It’s mainly Asiatic black bears, also known as moon bears, that are selected. But Sun bears and brown bears are also frequently used in the industry.

According to Animals Asia, both the conditions and extraction techniques in the trade are incredibly painful. Moreover, it causes “unimaginable physical and psychological suffering and long-term health problems.”

In some regions, the “free-drip” method is implored. This involves cutting a hole in the bears’ gall bladder to insert a permanent catheter.

What remains the same across these bile farms is that all animals are confined to small metal cages. Additionally, they’re often starved and dehydrated in order to maximize bile production.

Later in life, when they are no longer able to produce bile, they are often left to starve to death in their cages. That’s only if they haven’t already died from tumors or disease caused by the gruesome practice.

Various campaigning charities also report witnessing bears with damaged or missing teeth from trying to gnaw their way out.

It is these conditions that have prompted prominent celebrities such as Joaquin Phoenix and Stephen Fry to join welfare charities in the battle to save moon bears from the grim bile trade.

This weekend, World Animal Protection is conducting its biggest rescue mission to date.

All of the farms have agreed to voluntary transfers.Whilst bile extraction has been illegal in Vietnam since 2005, farmers are still allowed to keep the bears as “pets.”

According to the non-profit, this loophole has allowed for illegal bear bile extraction to carry on across the country.

But in partnership with the Forest Protection Department in Vietnam, World Animal Protection has been able to support 135 bear rescues in the country over the past five years. This is comprised of 101 voluntary rescues and 34 “confiscations.”

In a statement sent to PBN, they said: “This huge milestone means we are now nine bears closer to a bear-bile-free Vietnam.

“Despite the strides made to end bear farming in Vietnam, hundreds of bears are still suffering a torturous life in captivity for their bile.

“These nine bears were kept in tiny cages – not much larger than a telephone booth – for at least 17 years, which is when they were first microchipped.

“While they are the ‘lucky ones’ who are now free from cruelty, the scars from their extreme physical and psychological suffering will last their lifetime.

“The government of Vietnam must close all remaining legal loopholes. And, prohibit farmers from keeping their caged bears as pets in order to end the barbaric and illegal practice of bear bile farming.”

Phuong Le Duy, Vietnam consultant for the non-profit, added that most of the bears on the farms are thin, weak, and small due to being poorly fed.

“After meeting these bears in 2019, it’s rewarding to know that their owners have finally listened. And, can give them the peace they deserve after a lifetime of cruelty,” they added.

Traditional Chinese medicine (TCM) is thousands of years old and widely considered to be the oldest system of its kind in the world.

It’s centered on a connection to nature and operates on the basis of prevention being the best cure. Additionally, it heavily involves the use of remedies made from plant and animal-derived ingredients.

And, it’s not only China that conducts the practice – with reports in Africa, Latin America, the Middle East, and Europe.

Among the 70 species of animals used to produce treatments are tigers, rhinos, pangolins, and sea horses – as well as black bears.

They’re harvested for their bones, blood, skin, and organs to treat a range of ailments. Many are put through immense suffering as a result and are now at risk of extinction.

Campaigners have long called for government agencies in Asia to develop herbal substitutes for the medicines. There have been notable positivities within this, including a joint assessment between World Animal Protection and the Wildlife Conservation Unit at the University of Oxford.

They found that many regular consumers are “likely to be happy to replace animal-origin medicines with sustainable plant-origin alternatives.”

According to wildlife campaigner Gilbert Sape, of World Animal Protection: “TCM consumers, professionals, scholars, and government agencies must unite to make [development of plant alternatives] happen – and we stand by with them to facilitate this transition.”