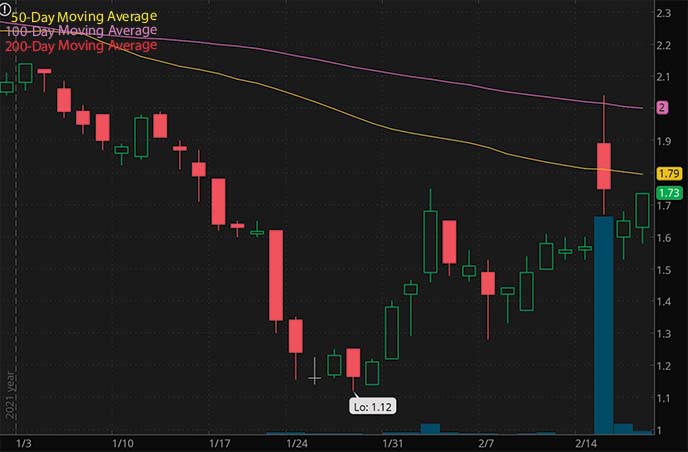 With the stock market pulling back again today, trading remains harder than usual. Unlike 2021, there hasn’t been a continuous flow of stocks moving higher daily. That has made it hard to find opportunities for novice traders. That’s to say, unless you know where to look, and right now, anyone looking for penny stocks to buy has probably seen a particular trend reemerge. What exactly is that trend? Today we’ve seen several low float stocks begin to trade higher thanks to the likes of Inspirato Inc. (NASDAQ: ISPO).

Why Did ISPO Stock Go Up Today?

The newly public luxury travel company made waves in the stock market today after rallying more than 660% in a single day. A mix of overly bullish sentiment and a lower float have played a role. There weren’t any headlines or commentary from the company, yet the recent close of its SPAC transaction has sparked interest in the stock.

Inspirato stock began trading under its new symbol this week, bringing it officially into the stock market spotlight. Regardless of its business model, traders have watched its stock for a different reason regarding its lower float. In the classic economic example of lower supply and higher demand, a low float signifies lower floating supply among retail traders’ hands.

Thursday, ISPO stock demonstrated precisely what can happen with low float stocks under the right circumstances. Thanks to this explosive move, the market also seems to have sought out sympathy trades. Today we look at a few low float penny stocks to add to your watch list.

Kicking off this list of penny stocks is AgTech company, AgriFORCE. It focuses on sustainability in the cultivation industry. In particular, its crop processing technology is being deployed to deliver plant-based foods and products.

This week, reports of a new acquisition helped spark some excitement in the stock. AGRI shares jumped from around $1.50 on Monday to highs of over $2 during the week. AgriForce entered into a definitive agreement to buy Delphy Groep BV based in the Netherlands for $29 million. The cash and stock transaction aims to bring Delphy into the AgriFORCE fold to optimize the production of plant-based foods and flowers. With operations in Asia, Europe, Russia, Africa, and Kazakhstan, its reach spans multiple continents. According to AgriFORCE, Delphy’s 2020 audited revenues were more than $26 million with an EBITDA of $3 million. In a February 15th press release, the company said Delphy expects 2021 revenues to be around $28 million.

AGRI stock has also caught some attention from the technical trading crowd on the heels of this news. Shares of the penny stock jumped as the low float trend pushed attention on related stocks. Right now, AgriFORCE shows a total outstanding share count below 20 million, which falls into the “low float” range.

Earlier this month, we discussed Maris-Tech in detail as it made a 2-day splash after its IPO debut. Shares surged to highs of $3.83 as news of the public offering’s closing date circulated. Furthermore, one of the main catalysts for drawing attention to the stock was Maris-Tech’s position in the defense and Homeland Security sectors. The company specializes in video transmission technology and provides its services for integrating with land, sea, and aerospace applications for intelligence gathering.

What’s more, some crypto speculation came into question after reviewing the company’s corporate deck.  Naama Avrahami, a Board Nominee, lists experience with “Security Token Offering and Blockchain Technologies” on her bio. While no cryptocurrency or metaverse keywords were listed in its corporate presentation, this seemed like a stand-out considering the recent hype stemming from the DeFi movement. (See: Penny Stocks To Watch: Why MTEK Stock Is Moving).

Fast-forward to this week, and more news has sparked momentum in the penny stock. Amid buss of a potential Russia-Ukraine war, defense stocks were already in focus. Meanwhile, Maris-Tech also announced it would be co-developing an AI system for drones and autonomous vehicles. According to the company, “The target applications for the products will be indoor and outdoor drones, unmanned miniature ground vehicles, loitering munitions, observation systems, high-end sights, autonomous vehicles, and situational awareness devices.”

With the addition of more interest on low float penny stocks, MTEK shares have come into the crosshairs of multiple market trends today.

Like Maris-Tech, Creative Medical Technology Holdings is on the list of low float penny stocks to watch right now. The company isn’t in the defense industry. However, it is focusing on advancing new technology. In this case, Creative Medical is advancing how companies address different immune disorders. Its ImmCelz platform is designed to “reprogram” immune cells in stroke patients.

According to the company, it has already demonstrated early success in animal models and currently has a pending Investigational New Drug Application filed with the FDA. Not much has been released by the company within the last few months. However, any recent focus is likely on the outcome of the pending NDA. In addition, several Schedule 13G amendments were filed this month, showing ownership stakes in the company by Altium Capital, L1 Capital, and CVI Investments, all reporting just under 5% stakes in the company.

Outside of the fundamentals, CELZ stock is wrapped into the low float trend. With fewer than 10 million shares outstanding, this meets the framework of the current trend. Whether or not that translates into the market is yet to be seen but worth noting all the same.

Shares of LoanDepot have struggled to reclaim their 2022 highs so far. After starting the year above $5, LDI stock has slowly dipped lower as February rolls on. The company was on our list of penny stocks to watch with insider buying earlier this month. Director Pamela Patenaude and CEO Anthony Hsieh actively bought shares of LDI stock. This week the company issued a formal press release discussing Hsieh, particularly his $16.2 million investment into the company through the purchase of 3.2 million shares total since November of last year.

Mr. Hsieh explained Thursday’s press release, “loanDepot’s assets and capabilities are some of the most sophisticated and diverse in the industry today, and our highly experienced management team continues to innovate and transform the industry. Our diversified loan origination channel strategy, top of funnel marketing and customer acquisition capability, nationally recognizable brand, proprietary mello® tech stack, growing in-house servicing platform, and suite of ancillary services position us to successfully compete in a challenging market environment.”

With most outlets showing LDI stock’s float sitting around 20 million, it has caught some attention in the stock market today as the low float trend gains steam.

Are penny stocks safe? – is something that I am sure many of you are wondering about. There’s plenty of risk, volatility, and uncertainty with any stock in general. Throw in other market metrics like lower float, penny stocks with higher short interest, or other factors, and it can amplify the risk factors. Your first step is always understanding how to trade and having a core strategy before making any trade.

If you enjoyed this article and you’re interested in learning how to trade so you can have the best chance to profit consistently then you need to checkout this YouTube channel. CLICK HERE RIGHT NOW!!