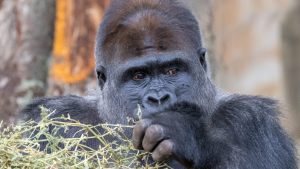 Thirteen captive western lowland gorillas have tested positive for COVID-19. The gorillas, who are kept at Zoo Atlanta in Georgia, are thought to have caught the disease from a staff member.

The zoo keeps around 1,500 captive animals at its premises. This includes 20 western lowland gorillas, which are critically endangered.

Zookeepers were alerted to the problem when they noticed symptoms such as coughing and nasal discharge among the gorillas.

Subsequent testing revealed most of the gorilla troop had the infectious disease.

“We are very concerned that these infections occurred, especially given that our safety protocols when working with great apes and other susceptible animal species are, and throughout the pandemic have been, extremely rigorous,” Sam Rivera, DVM, Senior Director of Animal Health, said in a statement last week.

The zoo says it was already using PPE around the great apes. It has now implemented N95 masks, Tyvek suits, and ‘modified cleaning protocols’, too.

Zoo Atlanta has also increased ventilation in its gorilla building, it says.

It’s not the first instance of gorillas testing positive for the infectious disease. In January, eight gorillas from San Diego Zoo Safari Park contracted COVID-19 from an infected zookeeper.

Several big cats at the Bronx Zoo in New York City and the San Diego Zoo have also caught COVID-19.

The Centers for Disease Control and Prevention discussed the issue of animals catching COVID-19 on its website. “Most of these animals became infected after contact with people with COVID-19, including owners, caretakers, or others who were in close contact,” it wrote.

It’s not yet clear whether animals like gorillas, lions, and tigers would be catching the disease if they were in the wild.

Zoo Atlanta is on the waiting list to receive the Zoetis vaccine. Zoetis originally intended to create a vaccine for household pets, but once minks began catching the virus at fur farms, the company adapted it for other species.

The U.S. Department of Agriculture has authorized the vaccine, despite the fact that the vaccine is still under development. According to The Philadelphia Inquirer, Zoetist ‘thought its prototype, which seemed to be safe and effective in cats, dogs, and other species, might work for a wider menagerie’.

Zoo Atlanta plans to vaccinate its Bornean and Sumatran orangutans, Sumatran tigers, African lions, and its clouded leopard. Staff will vaccinate the gorillas too, once they recover.

Zoetis is sending more than 11,000 doses of its vaccine to around 70 zoos in the US.