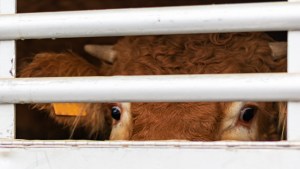 This week, a hefty purpose-built ship will transport over 10,000 cows all the way from Aotearoa (New Zealand) to China. The distance for the live animal export stretches11,160km.

In order for the vessel, The Al Kuwait, to set sail, it must pass animal welfare checks. But caution may be expected, as the departure comes 15 months after a sizeable vessel sunk in Japanese waters leaving just two human survivors.

Back then, headlines centered on the tragic losses of 40 crewmembers.

But the 6,000 cattle on board were lesser mentioned, and the global trade continues to drive on despite the thwarts of COVID-19.

2020 was the year that was grasped by a global pandemic. And despite it pausing normal life for a lot of us, it didn’t seem to dent the global export trade.

Earlier this month, a host of monkey deaths were reported on board the Spanish airline, Wamos Air. It’s believed that 720 macaques were being transported for medical experiments.

More widely, thousands of the species are transported across the globe year on year in horrific conditions.

In an exclusive, The Guardian revealed that ships carrying live animals are “twice as likely to suffer total loss from sinking.”

Within the nine years between 2010 and 2019, it reports five livestock vessels having sunk or got lost at sea, resulting in the deaths of animals and crew members.

And yet according to the outlet, the industry is worth a staggering almost £16 billion.

But despite these unspeakable deaths, ships including The Al Kuwait frequently depart from Aotearoa and beyond.

Extra requirements may have been implored to assure COVID-19 precautions and better animal welfare standards, but questions remain over the general safety of the undertakings.

Positively, the European Union (EU) is currently considering a ban on the “brutal” transportation of live animals.

Ever since June 2020, the European Parliament’s Committee of Inquiry on the Protection of Animals (ANIT) has been investigating transportation laws. It found that some states were not complying with regulations.

It comes after the UK became the first European country to ban such exports last year.

However, these findings merely shine the light on European exports, when the trade stretches across the US, Middle East, and further afield. Sudan, for example, transports millions of sheep to Saudi Arabia every year.

When will it end?

Animal Place is close to its 90,000 goal to urge the US government to halt the “deadly” process.

Similarly, Four Paws is seeking a ban on live exports outside the EU. The organization says it caused “immense suffering” for animals.

Namely, because it’s led to the loss of 2,500 young bulls in the Mediterranean Sea over the past year and a further 40,000 lambs on Spanish shores.

To join its calls, visit the Four Paws petition here

Compassion In World Farming has its own petition against the European live exports trade. The organization says we have a “crucial chance” to make a change, and that the opportunity must be “seized.”

You can voice your support here

While the RSPCA has welcomed the UK’s announcement to end live exports in the Kept Animals Bill, legislation is yet to see completion in parliament.

The organization urges supporters to get in touch with their MPs to ensure it is enshrined into law.

You can find out more here

The post 10,000 Cows Set For ‘Cruel’ Sea Trip To China: When Will Live Animal Exports End? appeared first on Plant Based News.