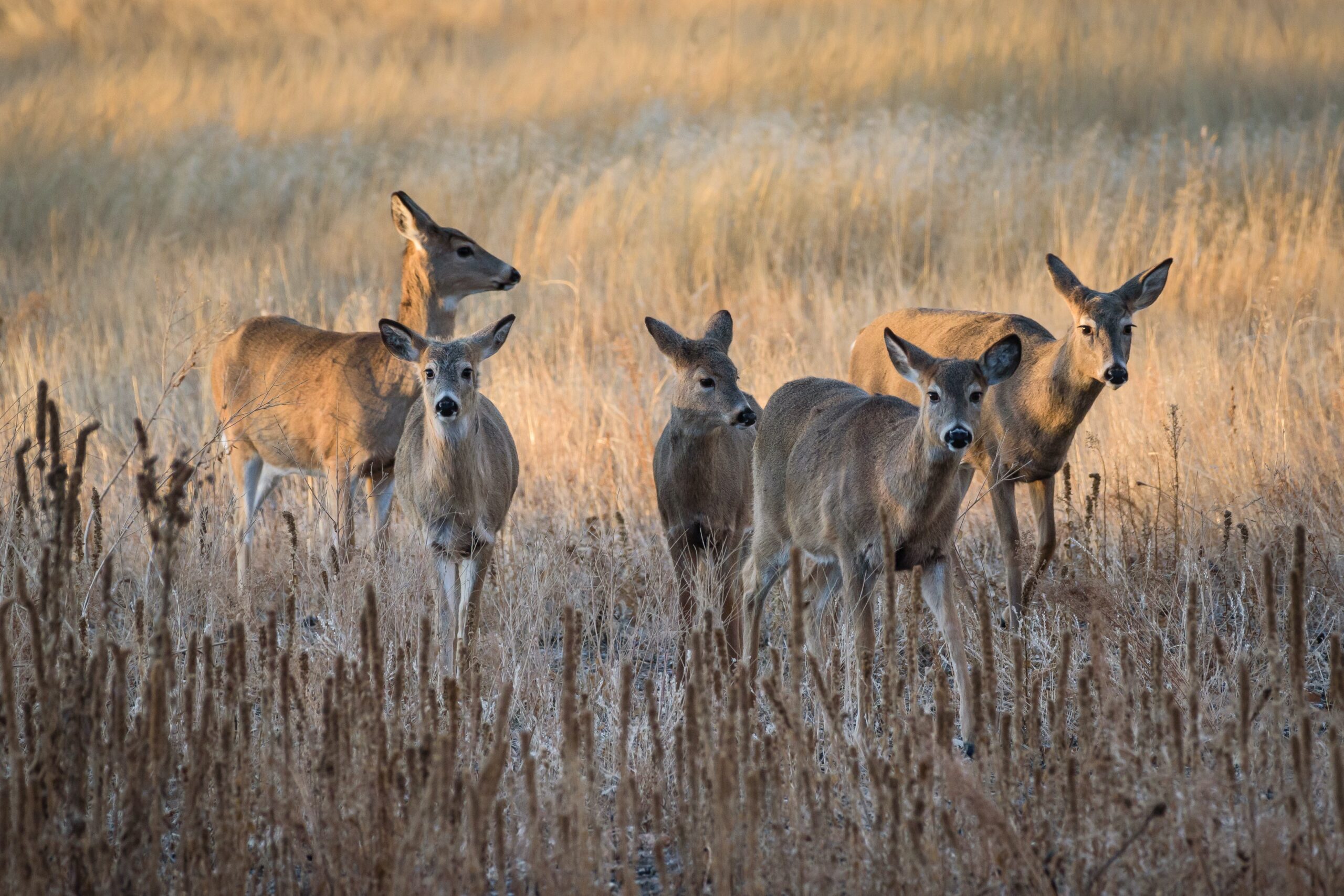 Chronic wasting disease, a deadly neurological infectious disease that affects deer, elk and moose, is spreading across North America. Most recently detected in North Carolina in March 2022, CWD has been confirmed in 30 U.S. states and four Canadian provinces, as well as Norway, Finland, Sweden and South Korea. Dr. Allan Houston, a professor of forest and wildlife ecology at the University of Tennessee’s 18,400-acre Ames AgResearch and Education Center in western Tennessee, explains what is known about CWD and what wildlife scientists are trying to learn.

Chronic wasting disease is contagious and relentless. There is no cure, no way to test living animals, and once infections are introduced into wild populations, there is no realistic way to stop them from spreading.

An infected deer typically will survive for 18 months to two years. There’s a long incubation period in which they don’t usually show symptoms, but as the disease progresses, the animals will begin to appear listless and lose weight.

In the final six weeks or so they can seem aimless and oblivious to danger, become emaciated and drool. They often stand with their legs spread like sawhorses, as if trying not to topple over.

These so-called “zombie deer” often get media attention, but as the disease progresses in the wild, deer become more susceptible to other diseases, less able to protect themselves, more prone to predation and more apt to be hit by cars. They rarely live long enough to become zombies.

How long have scientists known about CWD?

Chronic wasting disease was first detected in the mid-1960s when penned deer in Colorado began to exhibit symptoms generally described as “wasting away.” Researchers attributed it to stress until the late 1970s, when wildlife veterinarian Beth Williams performed necropsies on deer that had died of a similar syndrome. She found brain lesions consistent with transmissible spongiform encephalopathies – diseases of the nervous system that afflict both animals and humans.

In 1978, Williams and neuropathologist Stuart Young co-wrote the first scientific paper that described chronic wasting disease as a TSE. But the underlying cause remained a mystery.

A year later, neurologist Dr. Stanley Prusiner was studying TSE diseases and discovered that a very small protein could become misshapen and resistant to the body’s ability to take it apart. It entered cells, tricking them into replicating it, then moved into the lymph and nervous systems. Eventually it moved to the brain, where small clumps aggregated and caused TSE. Prusiner called that nonliving, infectious protein a “prion.”

Prion diseases are always fatal, but they don’t all affect the same species. The CWD prion favors cervids, or deerlike animals. Other prions cause human illnesses such as Creutzfeld-Jakob disease, a malady that progresses similarly to accelerated Alzheimer’s.

Bovine spongiform encephalopathy, popularly known as “mad cow disease,” is a prion disease that infects cattle. In a small number of cases, humans exposed to BSE have developed a version of Creutzfeld-Jakob disease.

No human case of CWD has ever been recorded. However, several laboratory experiments have shown that the CWD prion could be transferred to other mammals. The Centers for Disease Control and Prevention warns against eating meat from infected animals. Some infectious disease experts contend that “while the CWD threat to humans is low, it is not zero” and that risk assessments must include the potential for the emergence of new strains.

For example, while no one knows how or where CWD originated, some scholars think a mutated prion jumped the species barrier to deer from sheep infected with another animal prion disease called scrapie.

Why are prion diseases so hard to combat?

Because of their structure and the fact that they don’t contain genetic material, prions like the one that causes CWD are nearly indestructible. Breaking a prion apart, or denaturing it, would require a very high concentration of chlorine solution or heat exceeding 1,800 degrees F (980 C).

Once they are deposited on the landscape in urine or feces, CWD prions can persist for decades. Years after deer infected with chronic wasting disease were removed from pens, other deer placed on the contaminated soil in those same pens also became infected.

In wild herds the prion is spread as deer, which are highly social animals, groom and lick one another. During the fall mating season, bucks search for mates, fight and breed. They also visit spots known as scrapes, where they lick the soil and overhead branches where other deer have left their own calling cards. Thanks to these behaviors, bucks usually have CWD at double the rate of does.

Because the disease does not kill quickly, infected animals are able to breed for a season or two, so there is no strong genetic selection pressure favoring the development of herdwide immunity. And recent research suggests infected does can occasionally transmit the prion to their fawns before birth.

In some places where CWD occurs, the infection rate may only be 1% to 5%, and the disease’s herdwide impact may not be apparent, even to hunters. Elsewhere, the infection rate can reach 50% and maybe even 100%. In those cases, population impacts will inevitably lead to a smaller and younger herd.

What do hunters need to know?

No one wants a disease named after them. With infected deer often appearing healthy, even at close range post-harvest, the only way to be sure an animal is disease-free is to have it tested, usually using lymph nodes.

As CWD spreads and more people are having deer tested, it can take weeks to receive the results. That makes meat processing a much more onerous affair.

It is critical to recognize that once a single deer is infected it acts like tinder to ignite a conflagration. Moving deer around, either alive or dead, can introduce and spread the disease.

For example, transferring deer between breeding farms has been associated with its introduction. Disregarding state wildlife regulations that explain the proper ways to transport and dispose of harvested deer, elk or moose can also spread CWD. Feeding and baiting stations and salt licks can increase infection rates by concentrating deer and creating a point-source buildup of prions.

What do you want to learn about CWD?

CWD was detected in northern Mississippi and western Tennessee, where I work, in 2019. Based on what was then a relatively high infection rate, it had likely been on the landscape for a number of years and was spreading rapidly. Currently, about 40% of the Ames research station’s herd is infected.

Research on CWD has been ongoing for decades around the country. But it is in the South now. At Ames, in cooperation with other scientists from around the country, we are analyzing soil and twig samples for prion concentrations and quantifying deer visits at scrape sites and salt stations. We are also investigating ways to destroy salt stations to avoid continued exposure.

Other studies include training dogs to detect metabolites associated with the disease, and developing an early warning system before the prion can metastasize across a landscape.

We are studying how hunters react when CWD is detected locally, and comparing hunting success before and after a herd has become infected. The perspectives of hunters are important because they love the outdoors and are the first stopgap in CWD’s spread. Hunting is the primary tool for deer management, especially control of overabundant deer populations where CWD can run rampant.

Our deer hunters participate in the research at every step and often collect samples from deer they harvest. As one hunter said, “We’ve brought in everything except the tracks.”

We hope we can scale up our efforts along with other scientists as we analyze an ailing herd to provide insights into chronic wasting disease for the benefit of animals and humans alike.