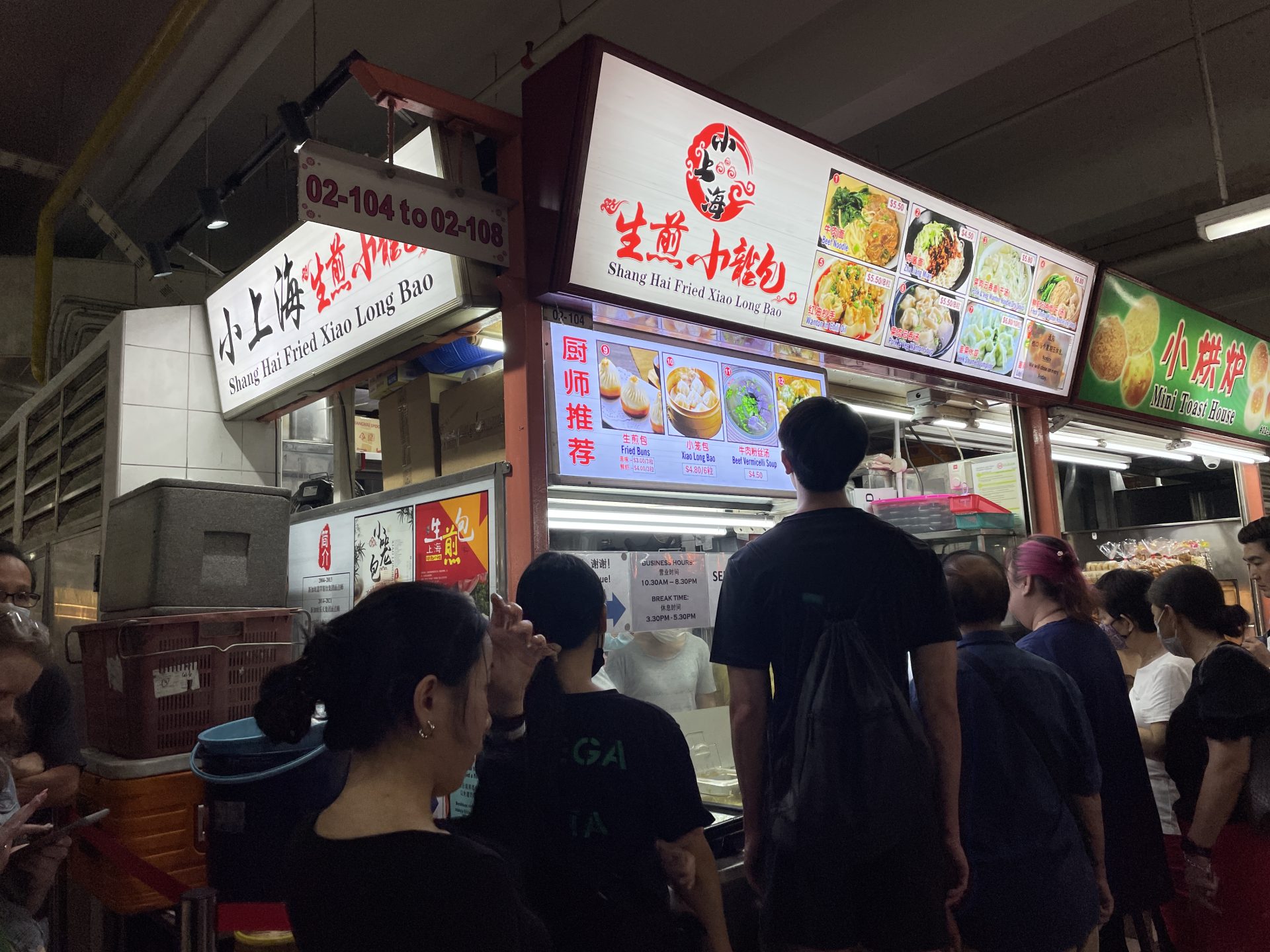 Have you ever wondered what it’d be like if xiao long baos had a crispy, deep-fried exterior? These actually exist! They’re called Sheng Jian Baos (生煎包), and these glorious pan-fried pork buns can be found at Shang Hai Fried Xiao Long Bao.

If you’re like me and you always get lost in Chinatown Complex Food Centre’s sprawling layout, you’ll find this popular hawker stall (#02-104) at the heart of the hawker centre’s second floor, right to Jia Ji Mei Shi and its iconic bright pink signboard.

Shang Hai Fried Xiao Long Bao was started by Chef Jiang, who has over 25 years of experience making dim sum as he was previously a dim sum chef at Crystal Jade and Paradise Group.

Even though I deliberately chose an off-peak timing to visit Chinatown Complex Food Centre, I was shocked to see a constantly growing queue at Shang Hai Fried Xiao Long Bao, which curved past the store and extended to the row of hawker stalls behind. Big yikes!

Regardless, the promise of freshly pan-fried pork buns, which are said to be a cousin of the popular xiao long bao, kept me going.

A specialty from Shanghai, these buns have a much thicker skin— more like an actual bao rather than the paper-thin xiao long bao skin— which contain juicy pork meat and gelatin, which melts into a soupy liquid when cooked. Plus, rather than being steamed in a dimsum basket, these buns are fried on a griddle and then steamed directly while remaining on the pan, which results in that characteristically crisp bottom.

After waiting for close to twenty minutes in the queue, I finally got round to placing my order. Eagerly, I managed to sneak a peek past the oil-slicked window and saw three staff dedicated to wrapping sheng jian baos.

While I initially wanted to order Shang Hai Fried Xiao Long Bao’s Sheng Jian Bao and Xiao Long Bao, imagine my shock when I was told that the Xiao Long Baos had been sold out while I was in the queue— and it was only shortly after 1pm!

What I tried at Shang Hai Fried Xiao Long Bao

I couldn’t wait to dig in. These looked absolutely delightful, with a crisp bottom and a fluffy, warm top that had been sprinkled with sesame seeds and spring onions.

To be entirely honest, my dining companion and I were stumped as to how to eat this properly. They were too big to sit on the provided plastic spoons comfortably, and they were too hot so we couldn’t tear them open using our bare hands.

We ended up biting a small hole and pouring out the pork broth onto a spoon, but you can also slurp out the broth directly if you wish. If you’re planning to bite directly into the Sheng Jian Bao, be prepared for the pork broth to explode and spurt out!

These were as good as I thought they’d be.

The bottom was so crispy that biting into it gave off an audible crunch, while the inside of the bao was filled with juicy pork meat that had been seasoned lightly. Completing the entire experience was the savoury, pork-filled broth, which was absolutely flavourful. I also loved how the skin had just the right thickness such that it held all the liquid and pork meat effortlessly without being overly doughy.

I’d imagine that this is what you’d get if you combined a fried mantou, regular bao and xiao long bao, and my biggest advice would be to eat it while it’s hot for maximum shiokness.

Though Shang Hai Fried Xiao Long Bao is most well-known for its Sheng Jian Baos, it also sells mains in the form of noodle dishes, such as its Beef Noodle (S$5.50).

The beef soup was lighter than expected, with mildly peppery and savoury notes that came through towards the end of each sip. I wished that it had been heavier and more flavourful, as it was a little too plain for my taste buds.

A fair bit of warning that this has to be consumed fast, as the noodles absorbed the soup at an alarmingly fast rate!

The thin slices of beef were puzzling, to say the least, as they had a cracked texture that reminded me of crocodile skin. Yet, they were springy and soft, though it could’ve definitely been much juicier.

Based on first impressions alone, I was already concerned that the noodles would be too dry as the black bean paste didn’t look saucy enough.

Despite the initial disappointment, I enjoyed the savoury zha jiang paste, which came through in a smoky and salty manner. The fermented soybean paste did a great job in adding that umami kick, while the minced meat was springy and juicy.

Shang Hai Fried Xiao Long Bao’s Zha Jiang Mian could’ve really used a good dollop of soup or sauce to loosen everything up, but my dining companion and I agreed that this was better than the Beef Noodles because its savoury flavours were much more pronounced.

After the meal ended, I was filled with mixed feelings.

I loved the Sheng Jian Bao for its wonderful combination of flavours and textures. You’ve got that audibly crispy bottom layer, soft bun exterior, springy pork meat, and savoury pork juice, but I wasn’t sure that it was good enough to warrant a twenty minute queue time.

Meanwhile, Shang Hai Fried Xiao Long Bao’s noodle dishes were frankly quite disappointing and we would definitely give those a miss the next time we’re around.

Would I return? Only for the Sheng Jian Bao, perhaps, and if I have spare time on my hands.