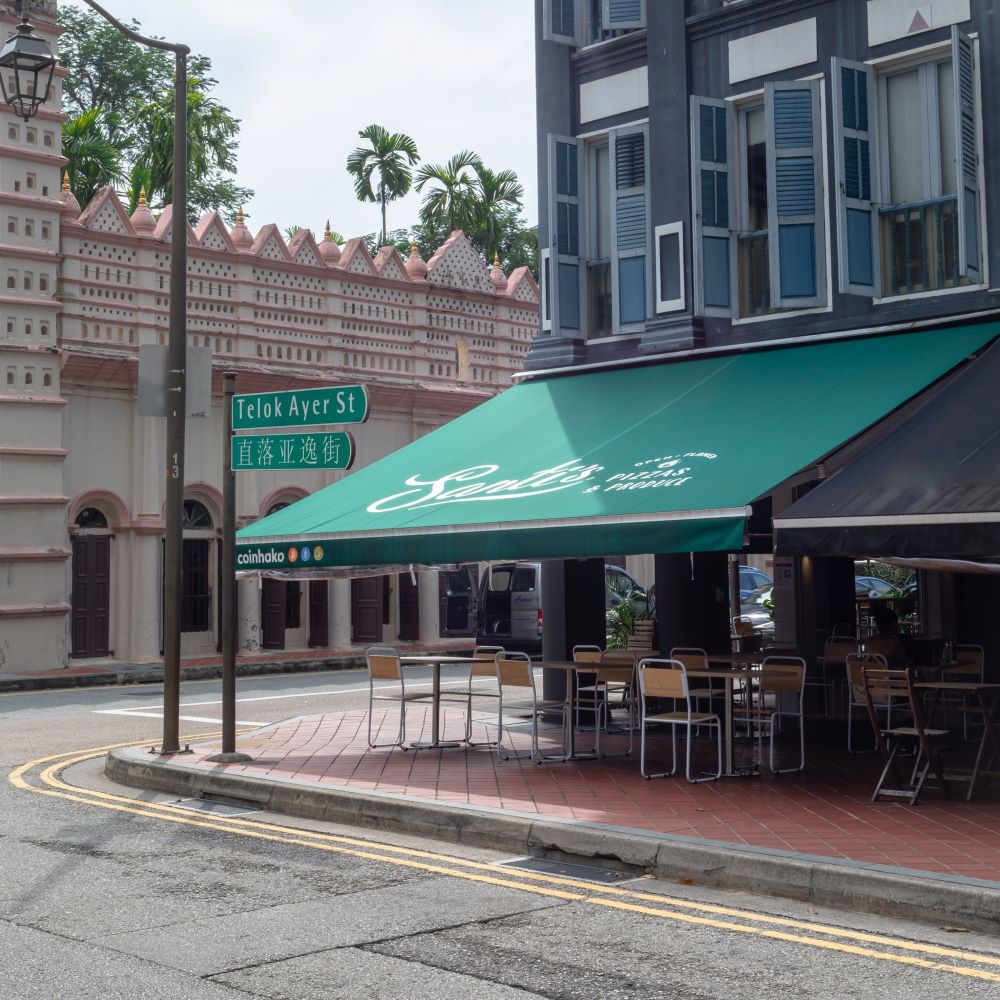 Shame on me for never having stepped foot into Sarnies, but for today, I suppose Santi’s will have to suffice. Brought to life by the same folks behind the famed institution along Telok Ayer Street, Santi’s is an opportunity for the Sarnies Group to “draw back the focus to timeless techniques with open flame cooking, while diving into the importance of quality products, low waste, and sustainability”.

The menu here at Santi’s is clean and lean—just how sustainability’s meant to be. You won’t spend too much time perusing the menu, which is something I always embrace, because a scroll of dishes in one place can sometimes translate to less attention on quality (sometimes, not always).

In this case, the Grilled Squid (S$21) makes for such a pay-off, with its aptly bouncy and crunchy legs just wading in kosho, shio koji, and brown butter—anticipating a fork to pick it up for devouring. There’s little done to this impeccable seafood, but it’s exactly the ‘less is more’ adage that applies so beautifully here.

If I don’t order a pizza with meat, my default vegetarian option almost always goes to mushrooms. The Cremini (S$25) is a testament that funghi can prove to be, well, fun. Sitting atop a slathered bed of Parmigiano crema, there’s an abundant sprinkling of Asian fermented shimeiji, fior di latte, cracked pepper, roasted garlic oil, and thyme.

There are plenty of herbaceous notes wafting around—surrounding this table—but I’m welcoming it all in every pungent bite of Cremini pizza slice.

The Baby Don’t Herd Me (S$30), on the other hand, is a tongue-in-cheek pizza that’s brimming with personality and spunk. I momentarily forgot that it comes with spicy harissa and I was sucker-punched with jabs of heat from all sides.

As someone who doesn’t possess a high spicy tolerance, I could only manage two slices before I waved my white flag of defeat—although it doesn’t detract from how sufficiently delicious this recipe is. The lamb was gratifyingly tender and it’ll be the sauciness of this pizza that’ll have you sneaking in way more crust than you initially intended.

Now, the Octopus & Bean Ragù (S$28) proved to be a split opinion. In some parts, the burnt octopus was as impeccably cooked as the Grilled Squid earlier, but it lost its star status amongst the bulky sourdough pici. The borlotti ragù drowned out the delicate flavours of octopus, leading up to a disappointing show of pasta with this dish.

With the hits and misses we’d witnessed that night at Santi’s, it’s rewarding to have been served the Leche Flan (S$12). It’s made special with yuzu caramel, mint, and macerated raisins for an acidic pop of contrast to the typical iteration of straight-up caramel.

Good enough to be enjoyed solo, this dessert had to be shared given the ravenous amount of food we’d enjoyed prior. But hey, this sweet tooth sister ain’t complaining.

Come for the pizzas, but also order the Grilled Squid for a fulfilling meal here. There weren’t any bells and whistles to show off here, so don’t come with expectations of being swept off your feet.

However, not all places need to put you in a starry-eyed stupor to get you to give it a thumbs up. Santi’s deserves at least that, but perhaps with more work, there’ll be two thumbs at attention someday.

New in town: Neighbourhood, Telok Ayer — Cycle your way downtown for a quick coffee or shake

The post Santi’s, Telok Ayer: Come for the pizzas, stay for the Grilled Squid appeared first on SETHLUI.com.