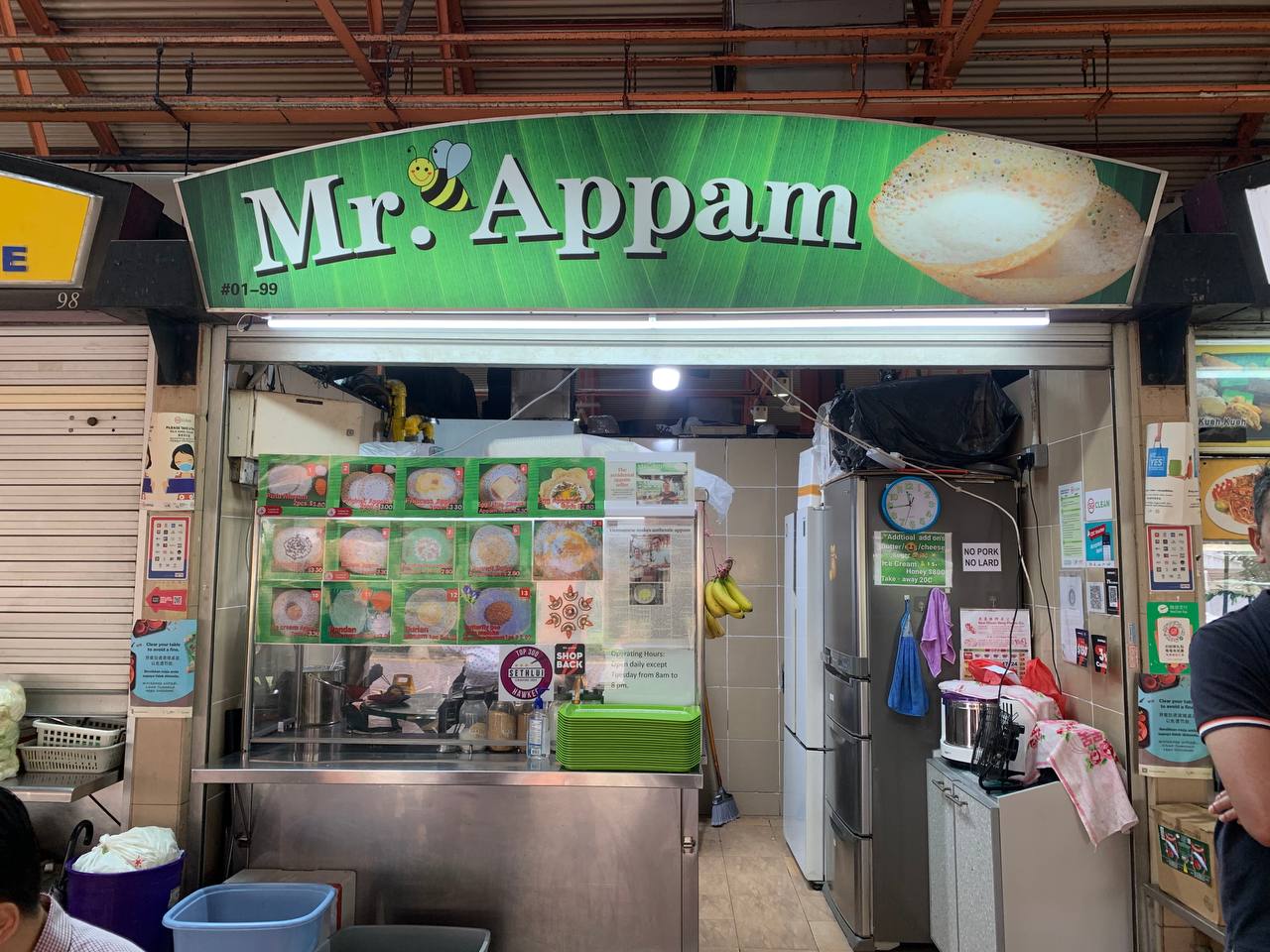 Did you know that we have our very own version of pancakes? I know what you may be thinking, pratas. Wrong— what I’m referring to are appams!

These pancake-like saucers originated from South India and are made with fermented rice batter and coconut milk. Though it is usually eaten as a savoury meal with curry and meat, it is often eaten as a snack in Singapore, with sugar and coconut shreds accompanying it.

What if, for some reason, you want durian on your appam? Well, you can, at Mr. Appam located at Maxwell Food Centre, though honestly, it should really be named Mdm Appam, since the owner and only worker is Madam Nguyen Thi Kieu Kanh, a Vietnamese permanent resident.

This Vietnamese-Indian stall came about because Mdm Nguyen was unable to change the stall’s assigned cuisine after winning a bid for the then-Indian stall, despite initially wanting to sell Vietnamese food (betcha didn’t know that’s a thing!). Turning things around, Mdm Nguyen learnt how to make appam from scratch as she saw there weren’t any stalls selling it.

Getting there is relatively easy as it is flanked by Chinatown, Telok Ayer and Tanjong Pagar MRT stations and requires only about eight minutes of walking. It’s open from 8am to 8pm and is closed on Tuesdays.

Mdm Nguyen adds her own twist to the ordinary appam by offering unique renditions, such as Banana Appam (S$3.30) and Chocolate Appam (S$3.30). Her own recipe for appam batter requires it to be fermented for 24 hours instead of the usual eight to 12 hours. It gives a more sour taste, but more on that later.

What I tried at Mr. Appam

My afternoon lunch consisted of Durian Appam (S$4), Putu Mayam (S$2.80) and Butterfly Pea Gula Melaka Coconut Appam (S$2.80). Since Mdm Nguyen was making appam on a per-order basis, service was understandably not the fastest, especially during peak hours. Freshness has got to cost something I suppose.

“Good colour,” Mdm Nguyen commented as she spread the durian paste on my appam. If my durian season calculator app was correct, it’s been a good month since durian season, but somehow Mdm Nguyen has her own stash of durian paste, seedless of course.

The sides of the appam were crispy and slightly warm. It reminded me of dosa, which also uses fermented batter. Apparently, the many tiny holes (sorry trypophobia folks!) on the appam were a good indication of a well-fermented one, and this has definitely been fermented well.

The durian paste didn’t just have a good colour, but it was naturally sweet as well. It tasted like good durian you get from honest fruit sellers, with the creaminess being on point. You will thank this sweetness later, as the fermentation taste really sets in towards the middle of the appam, aka the fleshier bits.

When I had my first bite of appam with durian, I was imagining durian ice cream atop crispy pancakes or waffles, but that thought was interrupted by the sour taste of fermentation at the end.

Theoretically, the contrast of both flavours should work and for the first two to three chews, it did. But then came that sharp taste of what seemed like acid cutting through any affinity between both flavours. As the spoonfuls grew, so did the twang of fermentation despite sips of warm teh tarik. I barely finished my plate.

This was an ordinary Putu Mayam. There was nothing special about it and it tasted as I’ve always had it. However, my ordeal with the durian appam left a sour taste that permeated my tongue, and gave me durian breath that would have banned me from entering an MRT, thus making this neutral-tasting dish a godsend.

The vermicelli-like noodles were easy to cut through. Plus, they were also slightly moist, making them easy to chew. The Putu Mayam itself was relatively tasteless, but the shredded coconut and red sugar given on the side elevated this dish to the next level.

I found that the shredded coconut still contained some juices, which made each forkful of vermicelli taste like creamy bee hoon. The red sugar didn’t just add sweetness, but also a much-needed texture that made the following mouthfuls crunchy with sugary bits. It was almost like a dessert buffet, where you’d add your own ingredients to create something new.

As I slowly devoured my Putu Mayam, I realised I had another plate of appam waiting. Full disclaimer: I didn’t base this selection on how pretty it looked, but more so for the slightly earthy flavour that the butterfly pea provided.

This time, the appam was topped with shredded coconut infused with gula melaka, and after my shredded coconut bliss on the previous dish, I was optimistic. However, that optimism didn’t last. Initially, my first bite tasted like bai tang gao, but somehow the sour taste eclipsed the first.

The brown shredded coconut did nothing against the tide of sourness, in fact it hurt the experience further by being dry. I felt disappointed, stabbed right through the heart with what was promised earlier. I could only muster two spoonfuls before I had it packed to-go.

Considering the extensive options, I am sure there’s one that’s bound to make the fermented taste palatable, at least for me. I strongly recommend having Putu Mayam if you think you might have trouble with an extra 12 hours of fermentation.

I’d definitely recommend Mr. Appam; the lack of appam and putu mayam stalls in Maxwell Food Centre makes it a no-brainer for anyone craving one. Might I suggest avoiding the durian-flavoured one before a meeting?

17 Nostalgic Foods That Are Disappearing From Singapore’s History