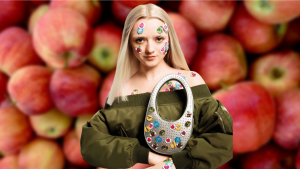 The 24-year-old, best known for her portrayal of Arya Stark in Game of Thrones, announced the collaboration online.

“Based on [Coperni’s] iconic ‘swipe bag’, our new edition is made from apple leather and comes with five little apple sticker pins for you to customize yourself,” Williams wrote to her 10.3 million Instagram followers.

The French fashion brand typically uses animal skin, such as calf leather, in its designs. But Williams, an advocate for sustainable living, pushed for an environmentally friendly alternative.

As such, Coperni used residuals from apple waste to craft the animal-free leather. It is naturally dried and free from chemicals, the brand says.

The Swipe Bag comes with a detachable body strap, so it can be worn as a crossbody or tote.

Williams continued: “I have loved making this collaboration with Coperni. I hope you love the bags and I hope this pushes more people to both shop and produce with materials that contribute towards a more sustainable future.”

A growing number of brands are ditching animal skin in favor of vegan alternatives, motivated by animal welfare and environmental concerns.

Breeding and raising animals, especially cows, for human use is to blame for copious amounts of greenhouse gas emissions, as well as significant deforestation and pollution.

Further, leather dust is a Group 1 carcinogen – the same category as tobacco, asbestos, and plutonium.

Bristol-born Williams was heavily involved in the design process, Coperni’s CEO Arnaud Vaillant revealed in an interview with Jing Daily.

“We did everything together. We have done many Zooms and chose the fabrics, the pins, and the colors together … Maisie was choosing everything with us and giving ideas. She was really involved,” Vaillant explained.

The CEO continued: “In the beginning, she inspired us as an actress, but then we discovered the she is so inspiring.

“I think she is a voice of a new generation, and I feel that she’s bringing not only a community but also strong values to the brand with a sustainable approach. Maisie seems very free, very independent, she carefully selects who she works with. We’re very proud. We think she’s bringing a lot to the Coperni brand.”