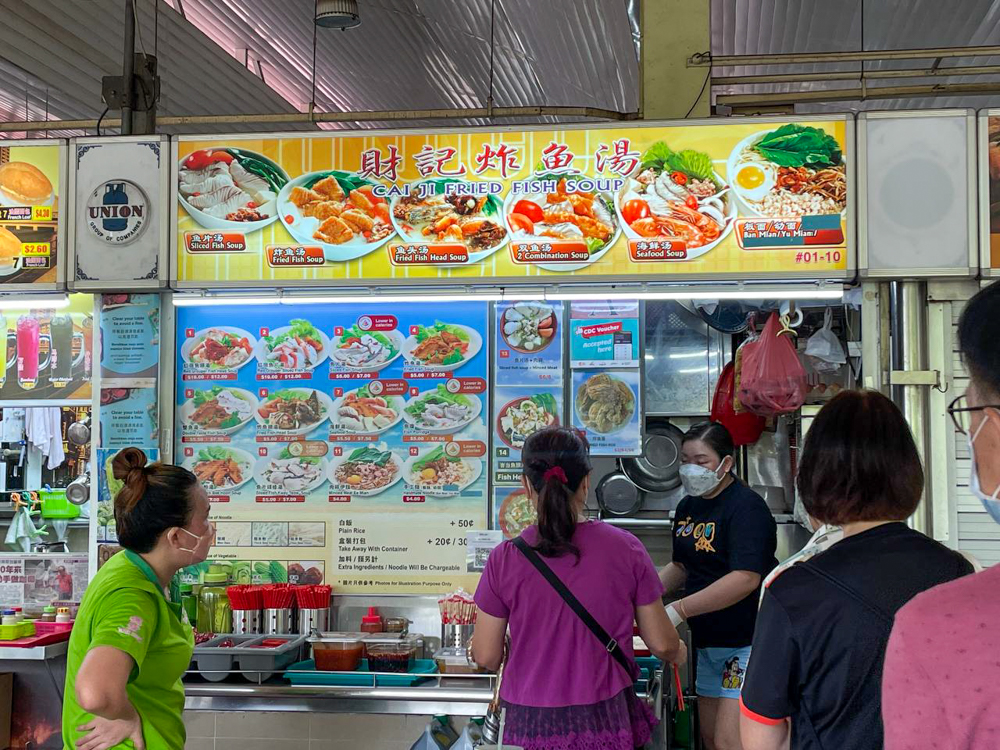 Word on the street is that Cai Ji Fried Fish Soup is where you head to if you’re up for some affordable red grouper fish head soup. This humble stall has been making its rounds on social media thanks to its generous portions of fresh red grouper fish head, which supposedly only go for S$10 a bowl!

Chong Boon Market & Food Centre might not be the easiest to navigate, as the cooked food stalls are located in a large U-shape, with the wet market stalls located in the centre of the area.

Impressively, Cai Ji Fried Fish Soup garners long queues no matter the time and day. If you’re coming for the Red Grouper Fish Head Soup, we recommend that you come around lunch, as it might get sold out as the day progresses.

What I tried at Cai Ji Fried Fish Soup

While I’m personally not the type to go for fish head, I do know that it tends to get quite costly and is hard to prepare, so I was eager to see how Cai Ji Fried Fish Soup would deliver on this dish.

Note that Plain Rice is charged separately at S$0.50 per bowl.

For just S$10, I was instantly taken aback by how generous and large these chunks of red grouper fish head were! I counted at least 6 to 7 pieces, with a good variety of parts— I spotted an eye, a fin, a part of the mouth, and more.

I admit that I struggled quite a bit with the fish head pieces, not knowing the best way to eat them, but I eventually found a certain joy in taking my time to dissect each piece. The fish meat was firm— a sure sign of freshness— and had a hint of briny sweetness.

I imagine that my grandparents, who are avid fish head fans and would easily polish off each part, would enjoy this value-for-money bowl of Red Grouper Fish Head Soup, and I made a mental note to bring them here the next time round.

I must say that Cai Ji Fried Fish Soup was really thoughtful, and even provided me with a folded paper waste bin for me to throw my fish bones in. Huge plus points for that!

The soup was my favourite part of the dish. Incredibly light, sweet and clean tasting, I could taste a strong sweetness from the fried yam slices, as well as a yummy full-bodiedness from the broth. This was really delicious and soothing soup that warmed me from the inside. I couldn’t taste any MSG at all, and even after polishing off the entire bowl, I wasn’t thirsty in the slightest due to any artificial flavourings.

If the generous amounts of red grouper fish head pieces weren’t enough, the Red Grouper Fish Head Soup came with plenty of other ingredients, such as fried sliced yam, thick wedges of tomato, small cubes of tofu, and cabbage.

Though the rest of the ingredients were pretty average, what I appreciated was how the cabbage wasn’t boiled together with the soup. Instead, the fresh cabbage is placed into the empty bowl first and the piping hot fish soup is poured directly on top after, so that the lettuce is still crunchy later on.

As compared to Cai Ji Fried Fish Soup’s plain fish soup, the milky version was much smoother and silkier. However, the addition of evaporated milk seemed to have negated any natural sweetness from the original fish soup, and instead made it a little saltier and full-bodied. Despite being an avid fan of evaporated milk in fish soups, I found myself gravitating back towards the Red Grouper Fish Head Soup.

To my disappointment, the sliced fish and fried fish were both dry and tough. I’ve definitely had better, fresher and softer pieces of fish meat before. The sliced fish tasted like it had been cooked prior to being added to the Double Taste Fish Soup, while the fried fish seemed to have been deep fried and left out in the open.

These were interesting, to say the least. Though it tasted a little stale and definitely not as crispy as I’d like (I suspect that like the fried fish slices, these weren’t deep-fried upon order), the little bits of fish roe were addictively briny and mildly salty. While I had expected them to be more on the savoury end, some chunks were slightly more bitter than others, so I’d say that this is an acquired taste.

To combat any possible muskiness or brininess from the Fried Fish Roe, I’d highly recommend that you pair it with the fermented soy bean sauce or chilli that’s available at Cai Ji Fried Fish Soup’s storefront.

Though I struggled to finish the Double Taste Fish Soup, I found myself thoroughly enjoying the Red Grouper Fish Head Soup for its naturally sweet and no-MSG tasting soup, as well as the generous chunks of fish head pieces. For just S$10, the dish is a definite steal, and a very value-for-money option for those looking to satiate their fish head cravings.

For those who aren’t into fish soups, you might be pleased to know that Cai Ji Fried Fish Soup also sells noodle dishes like Minced Meat Ee Mian (S$4) and Handmade Noodle (S$4), but frankly, I’m pretty sure that Chong Boon Market & Food Centre would have plenty of other options for you, such as fellow writer Aaron’s favourite bak chor mee stall, Yong Xin.

Still, worth a try.