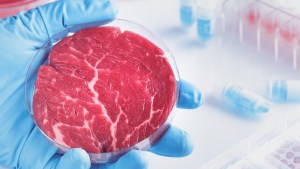 The production facility, based in the city of Rehovot, is capable of producing 500kg of cultured meat a day. That’s the equivalent of 5,000 hamburgers. The startup is using bioreactors to culture meat, including ham, chicken and lamb, as well as beef in the future. Future Meat Technologies’ CEO, Rom Kshuk, said: “This facility opening marks a huge step in Future Meat Technologies’ path to market, serving as a critical enabler to bring our products to shelves by 2022. “Having a running industrial line accelerates key processes such as regulation and product development.”

The method of production

The cultured meat industry is booming  and is expected to reach $352.4 million by 2028. Last year, the first cultured meat became available to buy for the first time in a restaurant in Singapore. However, the costs of production are high; the first lab-grown burger cost $330,000 to produce in 2013. But companies are quickly cutting these production costs down and Future Meat Technologies is producing price parity faster than market predictions. At $4 per 100 grams, the company says this is the lowest price yet for a cultured chicken breast. It predicts the cost will drop even further in the next 12-18 months. The company’s founder and chief scientific officer, Yaakov Nahmias, said: “After demonstrating that cultured meat can reach cost parity faster than the market anticipated, this production facility is the real game-changer. “Our goal is to make cultured meat affordable for everyone, while ensuring we produce delicious food that is both healthy and sustainable, helping to secure the future of coming generations.” Future Meat Technologies is currently aiming for its products to reach markets in the US by 2022 and is currently exploring several US locations for expansion. You can find out more about Future Meat Technologies here The post World’s First Cultured Meat-Production Facility Opens In Israel appeared first on Plant Based News. plant based cultured meat nasdaq-bynd future meat technologies future meat meat chicken beef lamb burger cultured lab-grown cellular industry startup