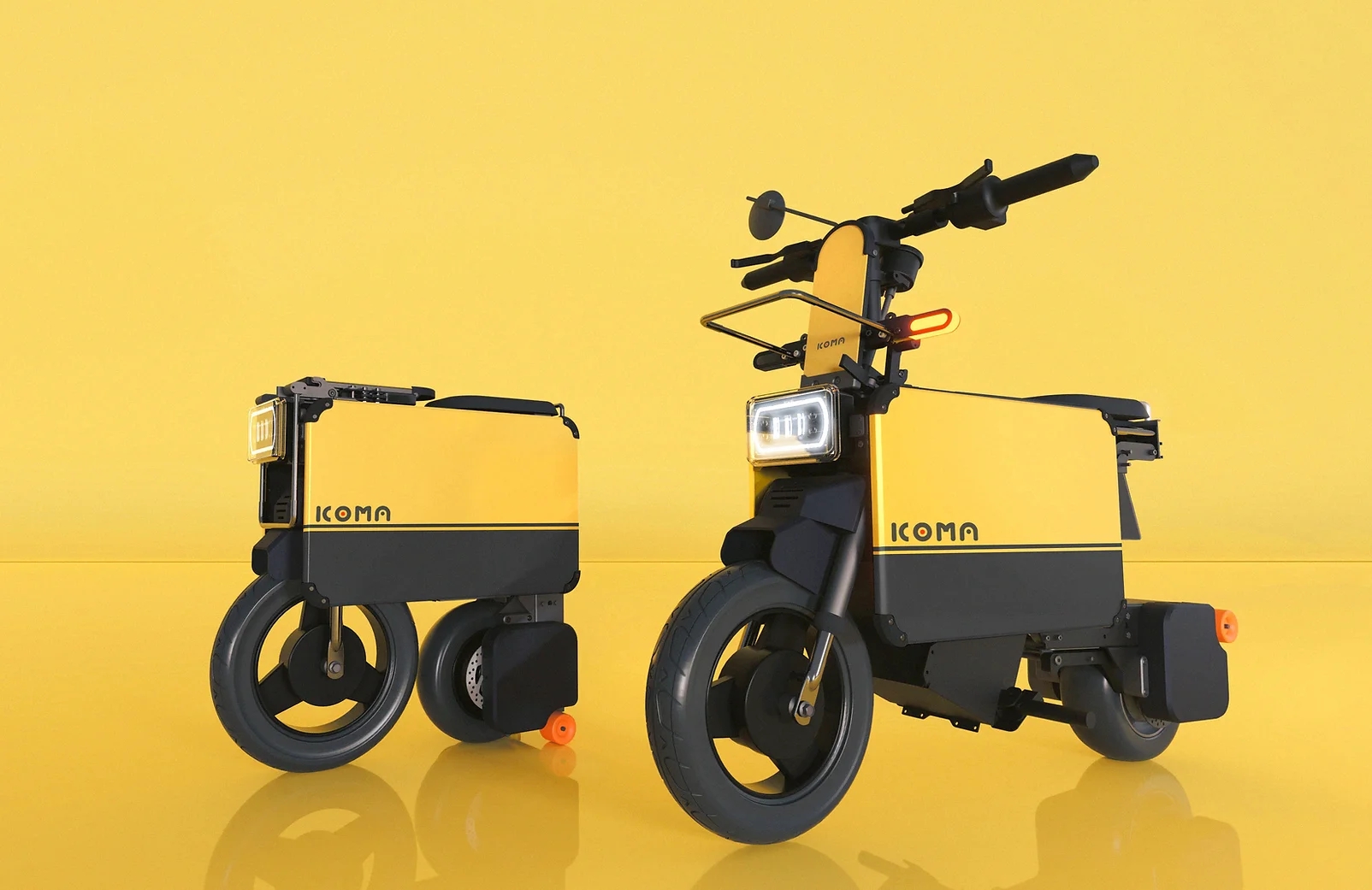 CES is about to begin in earnest, but even though the show floor opens tomorrow, we’ve already found lots of interesting tech at the show, ranging from practical to bizarre (yet compelling). Read on for our roundup of the coolest things we’ve seen so far.

Last night we spotted a suitcase-sized electric bike, the Icoma Tatamel. It makes a lot of compromises to get to that size (range, speed, wheel size, cost) but if you want an e-bike that fits in your trunk, it’s certainly worth looking into — it’ll be launching later this year.

If you’re the type of person who likes smart home lighting so you don’t ever have to reach for a light switch (what a pain, right?), Nanoleaf has you covered. Their new geometric smart lights supposedly learns how you use the lights and automates it without you having to set a routine. So when it sees you walk from the bedroom to the kitchen in the morning, it knows to bring on that soft, sun-like light. But when you walk in from the dining room at 6, bright cooking lights come on. Theoretically, anyway.

This is the exact moment that your correspondent got blasted with grapefruit scent. Image Credit: Haje Kamps / TechCrunch

How will you peel yourself off the couch, though, when you are immersed in the scentscape produced by Aromajoin. Works with anything filmed in Smell-O-Scope, so nothing yet, but there are some demo experiences that let you, for instance, enjoy the crackling sound and flickering light of a fire while getting that crucial smoky smell shot right at your nose. Haje called the smells “remarkably recognizable.” Comes out “soon.”

From the creator of the strangely soothing Qoobo soft robotic cat thing comes Fufuly, a “breathing pillow.” Sounds insane, but it’s based on the idea that people naturally match their breathing rhythm to respirators, or even those near them. The pillow will act as your breathing partner. Instructions: “Switch it on and hug it. This is all you need.” You said it, Shunsuke. Expect a crowdfunding campaign later this year.

I wrote up the Bird Buddy in 2021, and now the company is expanding from live identification of backyard songbirds to hummingbirds with its new feeder. It recognizes 350 species and of course sends pics right to your phone when you have a visitor. Interestingly the company has a data play simmering as well – it records the species, time, and location, building a database of bird movements. Perhaps there are patterns here worth packaging as a product…

Anyone who likes the idea of a smartwatch but doesn’t actually like the “watch” part should take note of the Nowatch, a device the company calls an “awareable.” It does the health-tracking stuff without a display, reminding me of the Misfit devices from long ago. No notifications, just steps, sweat sensing, and other metrics with a nice stone or gem as the face.

Roku has been one of the go-to brands for smart TVs for years, but now the company is graduating from powering Samsungs and TCLs to making its own. The new Roku-branded TV lineup will range from 24″ to 75″ and include the latest voice-powered remote. I have one and it’s super useful to just plug headphones into if you want to watch a show without fiddling with Bluetooth or apps or anything. The most expensive will still be under a grand, which is nice. Expect more details when they launch in the spring.

I remember talking to Formlabs back in the 3D printing gold rush, and the company has made good over the years. Now it is aiming to embrace high-volume additive manufacturing with an Automation Ecosystem that helps printers run 24/7 in an organized way. More plastic knick-knacks for everyone!

Doing urinalysis isn’t anyone’s favorite activity, but a lot of that is because it’s so primitive. Why doesn’t the lab just live in the toilet, where the pee is already going? Smart home company Withings is showing off a urinalysis device for home health monitoring – maybe not something for everybody, but for people with certain medical conditions or those working towards a particular goal, it could be invaluable. Europe gets this one first, naturally.

Toy company WowWee is still selling the Roboraptor, but now they have a brand new robot dog called MINTiDDog-E. Hopefully Dog-E for short, though that may attract unwanted lawsuits. If you want a robot dog but think Aibo is too basic, try this one. It communicates by wagging its tail, just like a regular dog, if regular dogs had persistence-of-vision LEDs embedded in their bodies.

Nuralogix claims to collect a thousand diagnostics from a 30-second selfie video, from blood pressure to stress, BMI, stroke risk, and blood sugar. Sounds like a lot of bunk to me, but I suppose the nice thing to do is let them put their thing out there and evaluate it on the merits.

Canon is going hard on 3D, AR, and metaverse style environments and interactions with some funky 3D video calling and virtual camera prototypes. It’s kind of cool, but also has the feeling of an unfiltered brainstorm session from just before the holidays. M. Night Shyamalan was there, but I think the twist is they paid him to appear.

With Kokomo VR meeting software, Canon takes a step away from its hardware roots

We talked with the creators of Kokomo, the 3D VR calling thing, and they really think it’s something new in the rather stagnant virtual presence space. Anything but another gallery of grainy faces.

Delivery robots are still a novelty to be found only on a handful of college campuses and other contained locations, but the tech is getting better: Ottonomy’s Yeti robot looks like the little rolling containers you might have seen trundling down the street or being hit by trains, but it can securely deposit its payload into a special locker. That means you don’t have to be there to receive the package, though of course like Daleks the things still can’t climb steps.

Samsung put out a wireless charger that acts as a smart home hub. Was that not already a thing?

Luminar founder Austin Russell gave a talk about the company’s ambitions (especially following its acquisition of a mapping startup) to do more than just make effective lidar devices. Apparently it is accelerating its move “up the stack” by buying up smaller companies at huge discounts. Smart — I do the same thing at the grocery store with almost-expired veggies. The scale is different, admittedly, but the philosophy is the same.

Normally when you’re in direct competition with Apple, you just sit in a corner and cry. Not Chipolo – its little object tracker devices compete with AirTags in a way, but the company is fine with that. Theirs fill a different, simpler role (basically “you forgot something” and it beeps) and they’re happy to have Apple take over the “sophisticated worldwide network with UWB” thing. “We’re not building a company because we want to build a company, right? We’re building the company because we want to help people. And that’s what Apple is also doing. So actually, it’s good.” How refreshing.

Wearable chairs are getting pretty futuristic. What’s wrong with just lying down?

There’s a new washer in town from Samsung, with a couple innovations that could help reduce the microplastics that come off of your laundry. Of course that horse left the barn long ago and now fish and turtles are basically cyborgs. Let’s all just agree to wear natural fibers!

Sony is making a Gran Turismo movie with Orlando Bloom in it, directed by Neil Blomkamp. Ridge Racer was robbed! Sony, call me.

Sony’s Project Leonardo controllers next to a DualShock controller.

Sony also is making an accessible controller to rival Microsoft’s awesome Xbox Adaptive Controller. Called Project Leonardo (for now, obviously), it’s a UFO-shaped thing that lets users plug in devices like switches and paddles so people with physical disabilities can play just as well as anyone else. We’re hoping to learn more about that one soon.