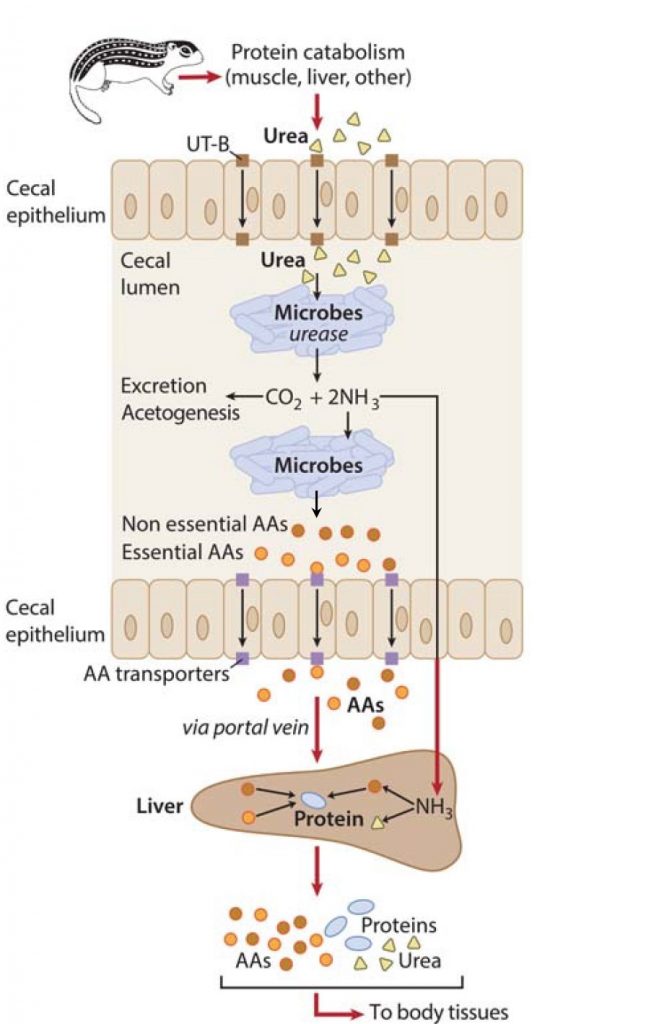 It’s common knowledge that animals who hibernate such as bears and ground squirrels, reduce their energy demands and use their fat reserves to meet their energy needs until spring. Yet, it has been a mystery how hibernating animals maintain protein balance and muscle mass in the absence of dietary nitrogen during prolonged winter fasting.

A study published in the journal Science, titled, “Urea nitrogen recycling via gut symbionts increases in hibernating ground squirrels over the winter fast,” shows symbiotic microbes in hibernating 13-lined ground squirrels (Ictidomys tridecemlineatus) break down urea—a waste product that is usually excreted as urine. This releases nitrogen that is reincorporated into the squirrel’s protein pool.

The authors showed that gut microbes incorporate nitrogen from urea which is turned into metabolites which are then absorbed by the squirrel’s intestinal lining. The nitrogen in these metabolites eventually makes its way into the animal’s cellular proteins and helps maintain protein balance in the absence of food.

The researchers observed urea nitrogen recycling is highest in late winter, when the synthesis of the protein that transports urea into the squirrel’s gut tissue and the enzyme (urease) in the microbes that breaks down urea are highest.

This study, led by Matthew Regan, PhD, assistant professor of animal physiology in the department of biological sciences at the University of Montreal, uncovers a new function of the gut microbiome and urea nitrogen recycling in maintaining protein balance in hibernating animals that could have implications for the future of space travel and in tackling starvation.

In this study, Regan and his team confirmed a theory known as “urea nitrogen salvage” that postulates that hibernators harness gut microbes to recycle the nitrogen present in urea and use it to build new tissue proteins.

Regan speculated his team’s new findings could help astronauts minimize muscle-loss under microgravity conditions that downregulate protein synthesis. At present, astronauts try to reduce the loss of muscle-mass in microgravity through intense exercise.

“Because we know which muscle proteins are suppressed during spaceflight, we can compare these proteins with those that are enhanced by urea nitrogen salvage during hibernation,” said Regan. “If there is an overlap between the proteins in spaceflight and the ones from hibernation, then it suggests this process may have benefits to muscle health during spaceflight.” Regan is continuing this line of investigation through a grant from the Canadian Space Agency.

Regan designed several new protocols to probe the presence of the urea nitrogen salvage pathway in the 13-lined ground squirrel. The researchers injected double-labeled (13C/15N) urea into the squirrel’s blood to track the carbon and nitrogen from urea through the metabolic steps.

They found urea from the squirrel’s blood was transported into the gut, where it was broken down by gut microbes and incorporated into metabolites. The labeled nitrogen from urea eventually appeared in the animal’s tissue protein. “Essentially, seeing 13C and/or 15N in metabolites at these various steps indicated that they originated from urea, and thus, that the hibernator was using urea nitrogen salvage,” said Regan.

The experiments on squirrels were conducted in summer and at the beginning and end of winter, providing evidence of the urea nitrogen cycle in the animals, and that the pathway was most used in late winter. Interestingly, if the gut microbiome was depleted, the pathway did not function, indicating the pivotal role of microbes in the process.

In addition to managing fitness in astronauts, the study could also have implications in tackling the scourge of starvation and undernourishment.

“The mechanisms that mammals like the 13-lined ground squirrel have naturally evolved to maintain protein balance in their own nitrogen-limited situations may inform strategies for maximizing the health of other nitrogen-limited animals, including humans,” said Regan. Developing pre- or probiotic pills that promote ureolytic microbes in the gut could offer a potential solution.

Regan noted that such translational applications need a lot more research. However, he added, since earlier studies have shown humans can recycle small amounts of nitrogen from urea using the same process, it is a matter of optimization.