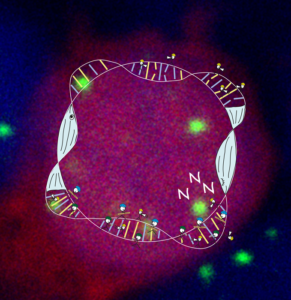 Why do humans spend a third of their lives sleeping? Why do animals sleep, even when there may be a continuous threat of predators? The question of how sleep benefits the brain and individual cells has remained a mystery, but studies in zebrafish, and in mice, by Bar-Ilan University researchers, have now provided a detailed description of the “chain of events” explaining sleep at the single-cell level. Their results indicated that a buildup of DNA damage in neurons during wakefulness increases sleep pressure. A protein called Parp1 senses this mounting DNA damage, signals when it’s time to sleep. During sleep efficient DNA repair occurs, which reduces the cellular homeostatic pressure that drives the need for sleep.

The team, led by Lior Appelbaum, PhD, a professor at Bar-Ilan’s Goodman Faculty of Life Sciences and Gonda (Goldschmied) Multidisciplinary Brain Research Center, suggests that the mechanism uncovered may explain the link between sleep disturbances, aging and neurodegenerative disorders such as Parkinson’s disease and Alzheimer’s disease. Appelbaum believes that future research will help to apply this sleep function to other animals, ranging from lower invertebrates to eventually, humans.

The authors reported on their findings in Molecular Cell, in a paper titled, “Parp1 promotes sleep, which enhances DNA repair in neurons,” in which they concluded that their results “demonstrate that DNA damage is a homeostatic driver for sleep, and Parp1 pathways sense this cellular pressure and facilitate sleep and repair activity.”

Sleep, accompanied by reduced responsiveness to external stimuli, is a “vulnerable behavioral state,” the authors wrote. Yet throughout evolution sleep has remained universal and essential to all organisms with a nervous system, including invertebrates such as flies, worms, and even jellyfish. What is different between species is the amount of sleep required, the authors continued. Adult humans sleep approximately 7–8 h per day, whereas owl monkeys sleep for 17 h, and free-roaming wild elephants may sleep only 2 h. “These diverse sleep requirements raise fundamental questions: what dictatesa species-specific sufficient amount of sleep, and what is the restorative neural process?”

When we are awake, homeostatic sleep pressure (tiredness) builds up in the body. This pressure increases the longer we stay awake, and decreases during sleep, reaching a low after a full and good night’s sleep. But what causes homeostatic pressure to increase to a point that we feel we must go to sleep, and what happens at night to reduce that pressure to such an extent that we are ready to start a new day, isn’t clear. “… the cellular homeostatic mechanisms that drive sleep needs, as well as the identity of the homeostatic factors, are unclear,” the researchers commented.

Studies have shown that during waking hours, DNA damage accumulates in neurons. “Enriched wakefulness and neuronal activity induce DNA double-strand breaks (DSBs) in mice and flies,” the team continued. This damage can be caused by various elements, including UV light, neuronal activity, radiation, oxidative stress, and enzymatic errors. During sleep and waking hours, repair systems within each cell correct these DNA breaks. However, DNA damage in neurons continues to accumulate during wakefulness, and excessive DNA damage in the brain can reach dangerous levels that must be reduced.

A series of experiments by Appelbaum, together with postdoc researcher David Zada, PhD, and colleagues, sought to determine whether the buildup of DNA damage could be the driver for homeostatic pressure and the subsequent sleep state. The scientists turned first to zebrafish as a live vertebrate model that they could use to try to identify cellular sleep drivers and understand the role for sleep in restoring nuclear homeostasis, at the level of single neurons.

With their absolute transparency, nocturnal sleep, and a simple brain that is similar to humans, zebrafish are a perfect organism in which to study this phenomenon. “The zebrafish is a well-established sleep model, and the structure and function of its brain, as well as the DNA damage and repair systems, are conserved with mammals,” the scientists stated.

Using UV radiation, pharmacologic intervention and optogenetics, the researchers induced DNA damage in zebrafish to examine how it affects their sleep. Their results showed that as DNA damage was increased, the need for sleep also increased. The experiment suggested that at some point the accumulation of DNA damage reached a maximum threshold, and increased sleep (homeostatic) pressure to such an extent that the urge to sleep was triggered, and the fish went to sleep. The ensuing sleep facilitated DNA repair, which resulted in reduced DNA damage. “Our causative experiments demonstrated that sleep increases the clustering of Rad52 and Ku80 repair proteins in neurons, which enables normalization of the levels of DNA damage.”

Having determined that accumulated DNA damage is the force that drives the sleep process, the researchers then wanted to see whether they could determine the minimum time that zebrafish need to sleep in order to reduce sleep pressure and DNA damage. Similarly to humans, zebrafish are sensitive to light interruption, and so the dark period was gradually decreased during the night.

These results suggested that six hours of sleep per night is sufficient to reduce DNA damage in the zebrafish. And, astoundingly, after less than six hours of sleep, DNA damage was not adequately reduced, and the zebrafish continued to sleep even during daylight. “There was a strong positive correlation (R = 0.76) between levels of neuronal DNA damage and total sleep time, suggesting that the amount of DNA damage can predict the total sleep time required for repair,” the team further noted.

Another question is what is the mechanism in the brain that tells us we need to sleep in order to facilitate efficient DNA repair? Sleep promotes the activity of the DNA damage repair (DDR) signaling pathway, which includes DNA damage sensors, signal transducers, and effector proteins required for repair, the team noted. “ … we reasoned that activation of a DDR protein might signal the organism to sleep in order to increase chromosome dynamics and enable the efficient assembly of repair proteins.”

The researchers focused on a protein called PARP1, which is part of the DNA damage repair system, and responds to single- and double-stranded DNA breaks. PARP1 marks DNA damage sites in cells, and recruits all relevant systems to clear out DNA damage. “PARP-1 is a DNA damage detector, which is recruited to DNA repair response,” they noted.

In accordance with DNA damage, the team found that clustering of PARP1 in DNA break sites increased during wakefulness and decreased during sleep. Through genetic and pharmacological manipulation, the overexpression and knockdown (KD) of PARP1 revealed that increasing PARP1 promoted sleep, and also increased sleep-dependent repair. Conversely, inhibition of PARP1 blocked the signal for DNA damage repair. As a result, the fish weren’t fully aware that they were tired, didn’t go to sleep, and no DNA damage repair occurred. “Inhibition of Parp1 activity abolished DNA damage-induced sleep, chromosome dynamics, and repair, even under strong sleep pressure,” the investigators stated.

To strengthen the findings in zebrafish, the investigators teamed up with Yuval Nir, PhD, at Tel Aviv University, to further test the role of PARP1 in regulating sleep, mice, using EEG. These results showed that as they’d seen with zebrafish, the inhibition of PARP1 activity in mice reduced the duration and quality of non-rapid eye movement (NREM) sleep. “These results extend those of zebrafish larvae along three separate dimensions, by (1) establishing them in mammals and (2) in adult animals, and (3) by showing that Parp1 affects sleep depth, beyond its effects on sleep duration,” the team stated.

In a previous study, Appelbaum and team used 3D time-lapse imaging to determine that sleep increases chromosome dynamics. Adding the current piece to the puzzle, PARP1 increases sleep and chromosome dynamics, which facilitates efficient repair of DNA damage accumulated during waking hours. The DNA maintenance process may not be efficient enough during waking hours in neurons, and therefore requires an offline sleep period with reduced input to the brain in order to occur. Appelbaum noted, “PARP1 pathways are capable of signaling the brain that it needs to sleep in order for DNA repair to occur.”

The authors concluded, “Here, imaging of cellular and nuclear markers, coupled with behavioral monitoring of zebrafish, showed that neuronal DNA damage can be a driver for sleep that promotes DNA repair activity … our findings that sleep regulates the neuronal balance between DNA damage and repair and consequently the health of the cell provide the basis for future work focusing on the causative link between sleep, aging, and neurodegenerative diseases.”

The post Study Unpicks What Drives the Need for Sleep at the Cellular Level appeared first on GEN - Genetic Engineering and Biotechnology News.