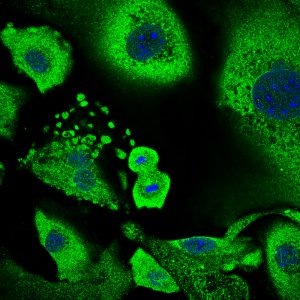 Studies by researchers at The Barcelona Institute of Science and Technology Centre for Genomic Regulation (CRG) have revealed important new insights into the molecular mechanisms that underpin the body’s natural defences against the development of skin cancer. The findings, which provide new clues about the behaviour of skin cancer at the cellular level, could offer up new therapeutic targets for treating the disease.

“We found that the protein CSDE1 coordinates a complex chain of events that enable senescence in skin cells, significantly slowing down their function without causing death,” said Rosario Avolio, PhD, who is first author of the team’s published study in Cell Reports, and who was a postdoctoral researcher at the CRG at the time of submission. “The resulting cells act as a firewall against cancer, suppressing the formation of tumours.” The researchers, led by the CRG’s Fátima Gebauer, PhD, reported on their studies in a paper titled, “Coordinated post-transcriptional control of oncogene-induced senescence by UNR/CSDE1.”

Oncogenic trasnformation is a multistep process, but cells can adopt counteracting mechanisms as a first line of defense against unrestricted cell proliferation, the authors wrote. One of these defense mechanisms is known as oncogene-induced senescence OIS), which is, they explain, “a form of stable cell-cycle arrest arising in response to oncogenic stimulation.” OIS must be bypassed for transformation, but the mechanisms of OIS establishment and bypass remain poorly understood, especially at the post-transcriptional level.

Among other features, senescence includes the secretion of a cocktail of cytokines, chemokines, growth factors, and proteases collectively known as the senescence-associated secretory phenotype (SASP). However, the relationship between senescence and the SASP with tumorigenesis is again complex, the team continued.

For their studies the CRG researchers and colleagues carried collected keratinocytes – the most abundant type of skin cell in the epidermis – from mice. Keratinocytes can give rise to various types of skin cancer including basal and squamous cell carcinomas, two of the most frequently occurring forms of all human cancers. The group experimentally introduced genes that drive the formation of cancer, which induced the cells into a state of senescence. They found that when levels of the protein cold shock domain containing E1 (CSDE1) were depleted, cells could not undergo senescence and became immortalised, a necessary step in the development of cancer. “Depletion of CSDE1 leads to senescence bypass, cell immortalization, and transformation, indicating tumor-suppressive roles,” the scientists wrote. CSDE1 is an RNA-binding protein (RBP), a type of protein that monitors RNA, often as soon as they’re made, with the potential to significantly change their function.

Further experiments revealed that when CSDE1-depleted cells were implanted under the skin of mice, they started forming malignant tumours. The authors found this striking because every treated mouse developed squamous cell carcinomas within 15 to 20 days, highlighting the importance of CSDE1 in tumour suppression.

The researchers discovered that CSDE1 promotes tumour suppression through two different mechanisms. CSDE1 induces the cell to secrete a cocktail of cytokines and enzymes that force the cell to enter a state of permanent growth arrest. CSDE1 also stops the synthesis of YBX1, a protein previously known to promote tumour growth and aggressiveness.

“Unbiased multi-omics studies uncovered two independent molecular mechanisms coordinated by CSDE1 to promote senescence, stabilization of SASP factor mRNAs, and inhibition of YBX1 mRNA translation,” the authors noted. “In summary, we show that CSDE1 follows a two-branched molecular mechanism to coordinately regulate cell proliferation and SASP expression during senescence: on one hand, CSDE1 stabilizes SASP factor mRNAs, and on the other, it represses the translation of the pro-oncogenic RBP YBX1. These data place CSDE1 as an important post-transcriptional mediator of cellular responses against persistent oncogene signaling.

The authors suggest that the study findings are surprising because CSDE1 has been previously linked to driving the formation of cancers, not suppressing them. Previous studies from the same group led by Gebauer found that CSDE1 promotes the formation of metastases in melanoma, a less common but the most aggressive type of skin cancer. Other studies have shown CSDE1 is linked to tumour proliferation in many types of cancer.

“CSDE1 is very much the ‘Dr. Jekyll and Mr. Hyde’ of proteins. It has an unpredictable dual nature depending on what type of cell and tissue it’s found in,” said Gebauer, acting co-coordinator of the Gene Regulation, Stem Cells and Cancer research programme at the CRG and senior author of the study. “We do not know why this protein causes cancer in some cases and suppresses them in others. Exploring the root cause of this will have important implications for the discovery of new, more personalized cancer treatments.”

One possible theory that explains why CSDE1 behaves differently is that normal skin cells or tumours each have slightly different variants of the protein, which affect the wider molecular machinery in different ways. “Deciphering what makes CSDE1 a tumor suppressor or an oncoprotein will be the goal of future research,” the authors noted.

The study is one of the few to examine the role of RNA-binding proteins in establishing cell senescence, which is an important new frontier in cancer research. “It was long thought that RNA-binding proteins are universal molecules that cells use for general housekeeping, and that they cannot be targeted therapeutically. It is becoming increasingly clear that this is not true, and that this emerging field is critical for understanding human disease,” concluded Gebauer.