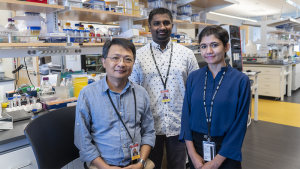 Researchers at Arizona State University’s (ASU) School of Molecular Sciences and the Biodesign Institute’s Center for the Mechanism of Evolution have discovered an unprecedented pathway producing telomerase RNA (TER) from a protein-coding messenger RNA (mRNA). Reported in PNAS, results from the team’s study of telomerase RNA biogenesis in corn smut fungus may unveil new mechanisms for telomerase regulation, and potentially point to new directions on how to modulate or engineer human telomerase for innovations in developing anti-aging and anticancer therapeutics, or offer up new approaches to vaccine development.

“Our finding from this paper is paradigm-shifting,” said ASU research lead Julian Chen, PhD. “Most RNA molecules are synthesized independently and here we uncovered a dual function mRNA that can be used to produce a protein or to make a noncoding telomerase RNA, which is really unique. We will need to do a lot more research to understand the underlying mechanism of such an unusual RNA biogenesis pathway.” Chen and colleagues described their findings in a paper titled, “Biogenesis of telomerase RNA from a protein-coding mRNA precursor,” in which they wrote: “Our findings expand the plethora of TER biogenesis mechanisms and demonstrate a pathway for producing a functional noncoding RNA from a protein-coding mRNA precursor.”

“Actually, there are many RNAs that are not used to make proteins,” said Chen. “About 70% of the human genome is used to make noncoding RNAs that don’t code for protein sequences but have other uses.” The authors further explained, “Many vital cellular processes that govern genetic information transfer from DNA to RNA to protein rely on a vast variety of RNA molecules. These RNAs include tens of thousands of messenger RNAs (mRNAs) that encode proteins as well as numerous noncoding RNAs (ncRNAs) that are not translated into proteins but form crucial ribonucleoprotein complexes.”

Telomerase is crucial for cellular immortality in cancer and stem cells, and telomerase RNA is one of the noncoding RNAs that assembles along with telomerase proteins to form the enzyme telomerase. The Nobel Prize in Physiology or Medicine was awarded in 2009 “for the discovery of how chromosomes are protected by telomeres and the enzyme telomerase.” In fact, telomerase was first isolated from a unicellular organism living in pond scum. But it was later found that telomerase exists in almost all eukaryotic organisms, including humans, and plays a crucial role in aging and cancer. Scientists have been working to discover ways to utilize telomerase to make human cells immortal.

Typical human cells are mortal and cannot forever renew themselves. As demonstrated by Leonard Hayflick a half-century ago, human cells have a limited replicative life span, with older cells reaching this limit sooner than younger cells. This “Hayflick limit” of cellular life span is directly related to the number of unique DNA repeats found at the ends of the genetic material-bearing chromosomes. These DNA repeats are part of the protective capping structures, the telomeres, which safeguard the ends of chromosomes from unwanted and unwarranted DNA rearrangements that destabilize the genome.

Each time the cell divides, the telomeric DNA shrinks and will eventually fail to secure the chromosome ends. This continuous reduction of telomere length functions as a “molecular clock” that counts down to the end of cell growth. The diminished ability for cells to grow is strongly associated with the aging process, with the reduced cell population directly contributing to weakness, illness, and organ failure.

Counteracting the telomere shrinking process is telomerase, the enzyme that uniquely holds the key to delaying or even reversing the cellular aging process. Telomerase offsets cellular aging by lengthening the telomeres, adding back lost DNA repeats to add time onto the molecular clock countdown, effectively extending the life span of the cell. “Telomerase is a eukaryotic ribonucleoprotein (RNP) enzyme that adds DNA repeats onto chromosome ends to maintain genomic stability and confer cellular immortality in cancer and stem cells,” the authors continued. “The telomerase RNA (TER) component is essential for telomerase catalytic activity and provides the template for telomeric DNA synthesis.”

Telomerase lengthens telomeres by repeatedly synthesizing very short DNA repeats of six nucleotides—the building blocks of DNA—with the sequence “GGTTAG” onto the chromosome ends from a template located within the RNA component of the enzyme itself.

Through their newly reported study Chen’s group showed that in one non-human species, a telomerase RNA is processed from a protein-coding mRNA, instead of being synthesized independently. Their studies uncovered the unexpected mRNA-derived telomerase RNA in the edible fungal model organism Ustilago maydis or corn smut, which is also known as the Mexican truffle. “In this study, we discover a basidiomycete fungal telomerase RNA that is processed from a messenger RNA (mRNA) transcript that encodes a conserved protein,” they stated.

The researchers suggest that the study of RNA and telomere biology in corn smut may provide opportunities for finding novel mechanisms for mRNA metabolism and telomerase biogenesis.

The gradual shrinking of telomeres negatively affects the replicative capacity of human stem cells, the cells that restore damaged tissues and/or replenish aging organs in our bodies. The activity of telomerase in adult stem cells merely slows down the countdown of the molecular clock and does not completely immortalize these cells. Therefore, adult stem cells become exhausted in aged individuals due to telomere length shortening which results in increased healing times and organ tissue degradation from inadequate cell populations.

Human diseases that include dyskeratosis congenita, aplastic anemia, and idiopathic pulmonary fibrosis have been genetically linked to mutations that negatively affect telomerase activity and/or accelerate the loss of telomere length. This accelerated telomere shortening closely resembles premature aging with increased organ deterioration and a shortened patient life span caused by critically insufficient stem cell populations. Increasing telomerase activity is seemingly the most promising means of treating these genetic diseases. So understanding the regulation and limitation of the telomerase enzyme may also hold the promise of devising strategies for reversing telomere shortening and cellular aging, with the potential to extend human life span and health span.

While increased telomerase activity could bring youth to aging cells and cure premature aging-like diseases, too much of a good thing can be damaging for the individual. Just as youthful stem cells use telomerase to offset telomere length loss, cancer cells employ telomerase to maintain their aberrant and destructive growth. Augmenting and regulating telomerase function will have to be performed with precision, walking a narrow line between cell rejuvenation and a heightened risk for cancer development.