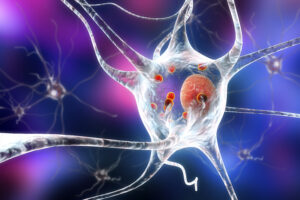 A common gene mutation for Parkinson’s disease drives mislocalization of iron in activated microglia, according to researchers who published a study (“Mutations in LRRK2 linked to Parkinson disease sequester Rab8a to damaged lysosomes and regulate transferrin-mediated iron uptake in microglia”) in the open-access journal PLOS Biology.

The results may help explain the accumulation of toxic iron in affected brain areas in the disease and provide a basis for the development of therapies designed to correct the iron trafficking defect.

“Mutations in leucine-rich repeat kinase 2 (LRRK2) cause autosomal dominant Parkinson disease (PD), while polymorphic LRRK2 variants are associated with sporadic PD. PD-linked mutations increase LRRK2 kinase activity and induce neurotoxicity in vitro and in vivo. The small GTPase Rab8a is a LRRK2 kinase substrate and is involved in receptor-mediated recycling and endocytic trafficking of transferrin, but the effect of PD-linked LRRK2 mutations on the function of Rab8a is poorly understood,” write the investigators.

“Here, we show that gain-of-function mutations in LRRK2 induce sequestration of endogenous Rab8a to lysosomes in overexpression cell models, while pharmacological inhibition of LRRK2 kinase activity reverses this phenotype. Furthermore, we show that LRRK2 mutations drive association of endocytosed transferrin with Rab8a-positive lysosomes. LRRK2 has been nominated as an integral part of cellular responses downstream of proinflammatory signals and is activated in microglia in postmortem PD tissue.

“Our data support a role of LRRK2 in modulating iron uptake and storage in response to proinflammatory stimuli in microglia.”

Mutations in the LRRK2 gene account for about 5% of all cases of familial Parkinson’s disease, and about 1% of non-familial disease cases. LRRK2 is a kinase, an enzyme that regulates other proteins through addition of a phosphate group, and disease-causing mutations are known to increase the kinase activity of the enzyme.

One of the targets that LRRK2 regulates is called Rab8a, a protein which, along with many others of the Rab family, helps control the trafficking of a wide variety of cellular vesicles (membrane-bound subcellular compartments). One of Rab8a’s jobs is to regulate the import of iron into the cell via the transferrin receptor, and to help recycle that receptor back to the membrane after it releases the transferrin and the iron it carries.

To understand how the LRRK2 mutations found in Parkinson’s disease might affect this process, researchers first visualized Rab8a movements in mouse astrocytes containing LRRK2 with a pathogenic mutation. They found that the mutant protein was responsible for redirecting Rab8a away from its normal location at the endocytic recycling compartment and sequestering it at damaged lysosomes.

Finally, when mice carrying the same Parkinson’s mutation were exposed to a proinflammatory trigger, iron accumulated in microglia in the striatum, a region of the brain that controls movement and is one of the most prominent parts of the brain affected in Parkinson’s disease.

“Our data suggest that a key step in the pathogenesis of LRRK2 Parkinson’s disease is the interaction of the protein with Rab8a and its subsequent effect on mislocalization of iron in activated microglia,” said Mark Cookson, PhD, senior investigator, laboratory of neurogenetics,  National Institute on Aging. “Iron deposition in the brain is a feature of Parkinson’s disease and other neurodegenerative diseases, and its accumulation may drive free radical production and damage to mitochondria, both thought to be critical steps in the disease cascade. “These results should help us understand the implications of blocking LRRK2 as a potential therapeutic for Parkinson’s disease.”

Cookson noted that his team’s study demonstrates altered regulation of iron in Parkinson’s disease models based on the gene LRRK2.

“Previous data has shown that iron can be deposited in the brain, which we now link to a known genetic cause of Parkinson’s disease that may be relevant to novel treatments,” he added.