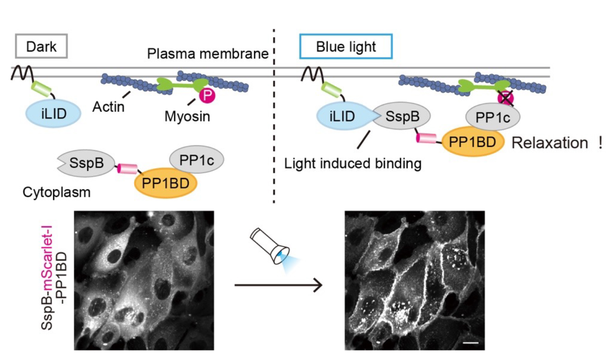 How cells assume unique shapes, move, divide, and organize are regulated by mechanical forces within cells. These mechanical forces are generated by actin protein filaments that form a thin network in the cell’s cortex (the region right under the cell membrane) and non-muscle myosin II that crosslinks with the actin network to form the actomyosin complex.

“It is of critical importance to disentangle the mode of action of actomyosin in order to understand how cells generate force and shape their morphology,” wrote the authors of an article titled, “Optogenetic relaxation of actomyosin contractility uncovers mechanistic roles of cortical tension during cytokinesis,” that was published recently in the journal Nature Communications.

The study reports the design and development of a new optogenetic tool that uses blue light to relax cellular tension by curbing its contractile forces. The tool, called OptoMYPT, was developed by a research team in the Division of Quantitative Biology at the National Institute for Basic Biology (NIBB) in Japan.

“We are convinced OptoMYPT will be useful for understanding various embryological and cell biological phenomena involving the actomyosin cytoskeleton,” said Kazuhiro Aoki, PhD, a professor at NIBB and senior author of the article. “In the future, we expect it can be used for freely designing the shapes of cells and tissues, and for forming artificial organs.”

The tool is designed to inactivate non-muscle myosin II, responsible for actomyosin contractility. To achieve this, the scientists used a protein called MYPT1 that inactivates myosin. MYPT1 brings the phosphatase, PP1c, close to myosin resulting in myosin’s dephosphorylation and inactivation. The researchers used light to manipulate the location of PP1c in cells through the PP1c-binding domain (PP1BD) of MYPT1.

Kei Yamamoto, a graduate student and the first author of the paper said, “We used a tool called iLID to control the localization of proteins with light. This tool is based on the idea that blue light irradiation causes iLID protein to bind to SspB proteins. First, the iLID protein is localized to the cell membrane, while SspB fused with PP1BD of MYPT1 is expressed within the cytoplasm. Blue light exposure induces the translocation of SspB-PP1BD from the cytoplasm to the membrane through binding to iLID, leading to the co-recruitment of endogenous PP1c to the membrane. Finally, the membrane-recruited PP1c dephosphorylates and inactivates myosin near the cell membrane.”

The authors showed that shining blue light on mammalian cells and frog embryos is enough to dephosphorylate and inactivate myosin, decreasing the contractile force in the cells.

The team then applied OptoMYPT to understand the mechanics of cell division. They showed that shining blue light locally at both poles of a dividing cell weakened the tension in the cell’s cortex, increasing the speed of cell cleavage.

“We find that the relaxation of cortical tension at both poles by OptoMYPT accelerated the furrow ingression rate, revealing that the cortical tension substantially antagonizes constriction of the cleavage furrow,” the authors noted.

When the researchers weakened the tension of the cellular cortex on only one side of the dividing cell, an oscillatory cytoplasmic flow occurred between the two daughter cells causing them to deform. This indicated that perturbing local mechanical forces using OptoMYPT disrupts the symmetry of cellular tensile forces that are pivotal in the progression of cell division.

The productive application of OptoMYPT in understanding the mechanics of cell division showed that the tool can be used to probe cellular and tissue mechanics. Combining red and blue light-responsive optogenetic tools, the authors noted, will make it possible to create sophisticated cellular shapes by locally altering contractile forces in cells and tissues.