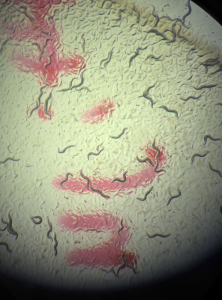 Studies in animal models by UF Scripps Biomedical Research scientists have identified a protein that could shed light on how people develop tolerance to pain-relieving drugs over time, a problem that raises the risk of addiction and overdose. The research, led by neuroscientist Kirill Martemyanov, PhD, and colleagues, indicates that PTCHD1, a protein that is involved in altering cholesterol content in a cell’s membrane, is involved in controlling opioid responses by regulating µ-opioid receptor (MOR) trafficking.

The researchers suggest that in addition to offering new directions for the development of pain medications that lower the likelihood of tolerance, their discovery raises the possibility that cholesterol in the cell membrane may affect how people respond to other drugs, too.

Senior author Martemyanov, together with colleagues including co-corresponding author Brock Grill, PhD, previously of Scripps Research, now of Seattle Children’s Research Institute and the University of Washington Medical School, reported on their findings in Nature Neuroscience, in a paper titled, “Ptchd1 mediates opioid tolerance via cholesterol-dependent effects on µ-opioid receptor trafficking,” in which they concluded. “ … we propose that Ptchd1 plays an evolutionarily conserved role in protecting the µ-opioid receptor against overstimulation.”

People who suffer severe pain from stroke, trauma, or cancer know that over time, the most effective prescription pain relievers lose power, said Martemyanov. To provide patients with the same pain-relieving effect, doctors often must prescribe higher and higher doses. To date, it’s not been clearly understood why this tolerance to opioids develops.

Hundreds of receptors known as G protein-coupled receptors (GPCRs) act as landing sites for medications and biological molecules on the surface of cells. About one-third of all medications act on a GPCR, making them of great interest to scientists. However, the authors noted, “… the molecular and cellular mechanisms underlying several key GPCR properties remain poorly understood. One such dark area is tolerance, a behavioral phenomenon that ensues from the cellular process of GPCR desensitization.”

MORs are the GPCR landing sites for drugs such as morphine and related molecules. When the drug is recognized by and triggers these MOR, systems within the cell are activated, resulting in pain relief, slowed breathing, and even the activation of digestive changes. But the mechanisms that cause tolerance aren’t well understood. “The genetic and molecular mechanisms governing MOR trafficking and how they relate to opioid tolerance in vivo have remained intensely studied yet incompletely understood and controversial areas of pharmacology,” the authors commented.

In their quest to better understand opioid tolerance, the scientists chose to conduct an “unbiased” genetic screen working using the tiny model roundworm Caenorhabditis elegans. Unbiased genetic screens allow the organism’s biology to reveal what’s happening, without preconceived ideas of specific genes that might be involved. Researchers often use simpler animal models like worms for this purpose. The work was conducted in Grill’s laboratory during his tenure at Scripps Research, Florida, which is now UF Scripps Biomedical Research.

They started by altering the genome of C. elegans by adding the mammalian µ-opioid receptor, to make the worms responsive to pain-relieving drugs. Treatment using fentanyl and morphine left the genetically altered worms paralyzed at first, but that effect diminished with repeated exposure, as the worms developed tolerance.

The genetically altered worms were then subjected to random genetic changes, silencing various genes. Those that stopped showing tolerance were selected for further testing to see what made them different. One gene, PTR-25, which encoded a membrane protein stood out. The closest mammalian version of this gene is known as Ptchd1.

Researching what was known about the human PTCHD1 gene, the team found that it was implicated in neuropsychiatric conditions, but little was known about how the gene functioned in cells. The researchers next tested knockout mice engineered to lack the Ptchd1 gene to see if the effect was similar in mammals. Their experiments found that mice lacking Ptchd1 not only failed to develop tolerance to opioids despite repeated exposure to these drugs, but the animals also showed reduced symptoms of withdrawal when treatment ceased. “Taken as a whole, our observations demonstrate that Ptchd1 negatively regulates behavioral responses to opioids and development of tolerance in mice, similar to its ortholog PTR-25 in C. elegans,” the scientists wrote. Electrophysiological studies also showed that loss of Ptchd1 in mice reduced opioid-induced desensitization of neurons in several brain regions and in the peripheral nervous system.

This discovery then raised a new and important question: Could enriching cholesterol in the cell membrane be a strategy for reducing opioid tolerance? To answer that question, they looked to known medications. A series of experiments led the team to simvastatin, a commonly prescribed cholesterol-lowering drug that also increases the high-density lipoprotein, or HDL, part of cholesterol. Their studies demonstrated that mice treated using simvastatin showed lack of tolerance to repeated opioid challenges. “… we found that short-term administration of simvastatin completely abrogated analgesic tolerance,” they wrote. “Moreover, simvastatin substantially reduced signs of somatic withdrawal.”

Finding a gene that drives tolerance to opioids by altering cholesterol in the cell membrane surprised the researchers. They suspect that cholesterol affects the cell receptors by either binding directly to them, or by indirectly controlling cellular activities downstream. “Here, we introduce Ptchd1/PTR-25 as a molecular genetic player that regulates MOR trafficking to enable behavioral tolerance,” they noted. “Our findings support a model in which Ptchd1 regulates MOR trafficking by changing the membrane lipid environment via effects on cholesterol.”

Understanding how cholesterol may drive tolerance is an important advance in the quest to find a new generation of pain medications less prone to causing overdose, indicated Martemyanov, who chairs the UF Scripps Department of Neuroscience. More work lies ahead, and the team also suspects that other genes in this family may be involved in regulating cell receptors such as MOR.

“… we propose that Ptchd1 reduces cholesterol availability for MOR, thereby altering its trafficking dynamics and interaction with adaptor proteins,” the team stated. “It remains to be determined whether cholesterol-regulated trafficking is the only mode by which Ptchd1 affects MOR, or if additional mechanisms further shape the interplay between the two to control the effects of opioids.”

Added Martemyanov, “There are more than 800 known G-protein coupled receptors, and regulation of cholesterol by genes in this family could be important to understanding many of them.” As the authors concluded, “Determining how different Ptch proteins affect the enormous repertoire of over 800 GPCRs in metazoans now becomes an expansive, exciting area for future investigation.”