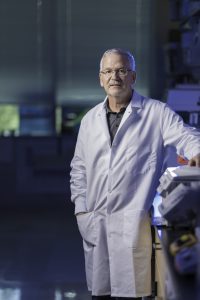 Scientists at UF Scripps Biomedical have described a specific protein that manages activities within chondrocytes, a critical cell type that maintains healthy cartilage in joints. As people age and stress their joints, their chondrocytes begin to fail. The UF Scripps team found that activating a specific protein in these cells called RORβ (beta) could restore multiple factors needed for smooth joints to healthier levels, helping to control inflammation.

Activating RORβ could serve as a new approach to prevent or delay development of the osteoarthritis, according to the researchers who published their study “RORβ modulates a gene program that is protective against articular cartilage damage” in PLOS.

“Osteoarthritis (OA) is the most prevalent chronic joint disease which increases in frequency with age eventually impacting most people over the age of 65. OA is the leading cause of disability and impaired mobility, yet the pathogenesis of OA remains unclear. Treatments have focused mainly on pain relief and reducing joint swelling. Currently there are no effective treatments to slow the progression of the disease and to prevent irreversible loss of cartilage,” write the investigators.

“Here we demonstrate that stable expression of RORβ in cultured cells results in alteration of a gene program that is supportive of chondrogenesis and is protective against development of OA. Specifically, we determined that RORβ alters the ratio of expression of the FGF receptors FGFR1 (associated with cartilage destruction) and FGFR3 (associated with cartilage protection). Additionally, ERK1/2-MAPK signaling was suppressed and AKT signaling was enhanced. “These results suggest a critical role for RORβ in chondrogenesis and suggest that identification of mechanisms that control the expression of RORβ in chondrocytes could lead to the development of disease modifying therapies for the treatment of OA.”

Addressing the root cause of cartilage damage

“People need an osteoarthritis medication that addresses the root cause of cartilage damage and depletion as there currently are no disease-modifying drugs for what is the number one cause of disability in the United States,” said Patrick Griffin, PhD, a professor of molecular medicine and scientific director of UF Scripps Biomedical Research.

“While our work is in the early stages, our study suggests that the nuclear receptor RORβ could present a novel therapeutic target to protect cartilage damage and perhaps turn on cartilage regeneration.”

RORβ, short for retinoic acid receptor-related orphan receptor beta, is a nuclear receptor protein. In cells, genes switch between periods of activity and inactivity. When nuclear receptors bind to DNA, that activates the cell’s process of transcribing genes into proteins. RORβ has been linked to development of the eye’s retina during fetal growth, and it can influence circadian rhythms by controlling clock genes. But its role in maintaining cartilage health was unclear.

Griffin has studied causes of bone diseases for many years. He zeroed in on RORβ for several reasons. While few studies have been focused on this receptor, some had shown correlation between the receptor’s activity and bone loss. So he and colleague Mi Ra Chang, PhD, set out to better understand it. Chang engineered cell lines to enable the studies.

“To our surprise, the gene program upregulated by increase in RORβ activity was supportive of the formation of chondrocytes, anti-inflammatory, and protective against cartilage degradation,” explained Chang.

“This study suggests RORβ could be an attractive therapeutic target. However, there’s much more we need to unravel,” said Griffin. “Specifically, we want to understand more about the mechanism by which RORβ impacts chondrocytes and blunts the inflammatory signals that lead to cartilage destruction.”