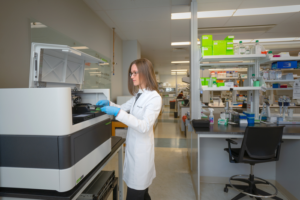 Senescent cells—cells that have stopped dividing—continue to build up in tissues throughout the body. When they do, they contribute to the aging process, pathology, and states of dysfunction in animal models. However, detecting these cells in human tissues has been challenging. Now, scientists have identified a rare population of potentially toxic senescent cells in human brains that can serve as a target for a new Alzheimer’s disease (AD) treatment.

This work is published in Nature Aging, in the paper, “Profiling senescent cells in human brains reveals neurons with CDKN2D/p19 and tau neuropathology.”

Past research conducted by Miranda Orr, PhD, assistant professor of gerontology and geriatric medicine at Wake Forest School of Medicine, found that senescent cells accumulated in mouse models of AD where they contributed to brain cell loss, inflammation, and memory impairment. A therapy to clear the senescent cells halted disease progression and cell death.

“However, until now, we didn’t know to what extent senescent cells accumulated in the human brain, and what they actually looked like,” Orr said. “It was somewhat like looking for the proverbial needle in a haystack except we weren’t sure what the needle looked like.”

They developed a senescence eigengene approach to identify rare, senescent, cells within large, diverse populations of postmortem human brain cells. Eigengenes, the team noted, are useful when no single gene reliably captures a phenotype, like senescence.

By profiling tens of thousands of cells from the postmortem brains of people who had died with AD, the team found that approximately 2% of cells were senescent cells. The sample size was a population of ∼140,000 single nuclei derived from 76 postmortem human brains with various levels of Alzheimer’s disease pathology.

Next, Orr’s team sought to determine if the senescent neurons had tangles—abnormal accumulations of tau protein that can collect inside neurons in AD. These tangles closely correlate with disease severity. The more tangles individuals have in their brains, the worse their memory, Orr said.

The researchers found that the senescent neurons not only had tangles but that they overlapped to the point that it was hard to distinguish between them. More specifically, more than 97% of the senescent cells were excitatory neurons and overlapped with neurons containing neurofibrillary tangle (NFT) tau pathology.

The authors noted that cyclin-dependent kinase inhibitor 2D (CDKN2D/p19) was predicted as the most significant contributor to the primary senescence eigengene. RNAscope and immunofluorescence confirmed its elevated expression in AD brain tissue.

The team concluded that CDKN2D/p19-expressing neurons with NFTs represent a unique cellular population in human Alzheimer’s disease with a senescence-like phenotype.

“Now that we have identified these cells in the brain, we have opened the door to many possibilities, including treatment options for people with Alzheimer’s,” Orr said.

Orr is in the process of launching a $3 million, Phase II clinical trial funded by the Alzheimer’s Drug Discovery Foundation (ADDF) to test the effects of clearing senescent cells in older adults with mild cognitive impairment or early stage Alzheimer’s. The intervention, which was discovered by Orr’s collaborators at the Mayo Clinic, consists of administering a repurposed FDA-approved drug designed to clear cancer cells in combination with a flavonoid, a plant-derived antioxidant.