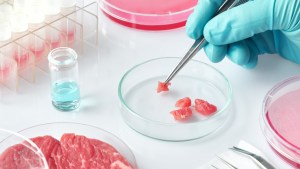 Swiss conglomerate Nestlé is set to expand into the cell-cultured meat market, according to inside sources.

The food giant is reportedly teaming up with Israeli start-up Future Meat Technologies Ltd. to bring the alternative protein to the masses.

Whilst the company has not revealed any details, it comes as Chief Executive Officer Mark Schneider looks to meet consumer demands as more report concerns about their health and the environment.

This is according to a Bloomberg report.

Moreover, it is understood the products will be made under Nestlé’s Garden Gourment brand.

Based in Rehovot, the factory is capable of producing 500kg of product a day: the equivalent of 5,000 burgers.

Additionally, the process involves placing animal cells in a bioreactor.

Current plans are to release products in the US by 2022.

The concept is to recreate the texture and taste of animal products without killing them.

Moreover, it is praised for offering a meat alternative that is better for the environment. Additionally, it’s been billed to one-day end animal agriculture for good.

Company To Save 170,000 Pigs By Scaling Up Cell-Cultured Meat Production In The UK

Whilst some experts predict the cell-cultured meat market to grow exponentially over the next few years, it is not with criticism. It’s a topic that has become controversial, with many vegans against it.

Equally, many vegans also disagree with Nestlé on ethical grounds.

When PBN invited readers to offer their views, a host reported concerns over how animals will be kept before cells are taken. Despite this, others were in favor of it with hopes it could stamp out factory farming.

‘It’s the messing around with nature that bothers me. Every time we do something untoward happens. I’d rather not eat it anyway but it may persuade others to become vegan’, one respondent claimed.

However, the industry is expected to be worth a staggering $352 million by 2028. And, it could reach grocery stores within the next five years.