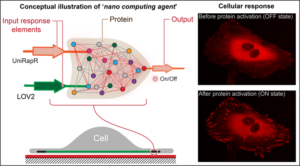 Scientists at Penn State report that they have produced a nanocomputing agent that can control the function of a particular protein that participates in cell movement and cancer metastasis. They say their research paves the way for the construction of complex nanoscale computers for the prevention and treatment of cancer and other diseases.

The team, which involved Nikolay Dokholyan, G. Thomas, PhD, Passananti Professor, Penn State College of Medicine, and his colleagues, including Yashavantha Vishweshwaraiah, PhD, postdoctoral scholar, created a transistor-like “logic gate,” which is a type of computational operation in which multiple inputs control an output. They published its study (“Two-input protein logic gate for computation in living cells”) in Nature Communications.

“Advances in protein design have brought us within reach of developing a nanoscale programming language, in which molecules serve as operands and their conformational states function as logic gates with precise input and output behaviors. Combining these nanoscale computing agents into larger molecules and molecular complexes will allow us to write and execute ‘code,’ write the investigators.

“Here, in an important step toward this goal, we report an engineered, single protein design that is allosterically regulated to function as a ‘two-input logic OR gate’. Our system is based on chemo- and optogenetic regulation of focal adhesion kinase. In the engineered FAK, all of FAK domain architecture is retained and key intramolecular interactions between the kinase and the FERM domains are externally controlled through a rapamycin-inducible uniRapR module in the kinase domain and a light-inducible LOV2 module in the FERM domain.

“Our logic gate is just the beginning of what you could call cellular computing,” said Dokholyan, “but it is a major milestone because it demonstrates the ability to embed conditional operations in a protein and control its function. It will allow us to gain a deeper understanding of human biology and disease and introduces possibilities for the development of precision therapeutics.”

The team’s logic gate comprised two sensor domains designed to respond to two inputs— light and the drug rapamycin. The team targeted the protein focal adhesion kinase (FAK) because it engages in cell adhesion and movement, which are initial steps in the development of metastatic cancer.

“First, we introduced a rapamycin-sensitive domain, called uniRapr, which the lab had previously designed and studied, into the gene that encodes FAK,” explained Vishweshwaraiah. “Next, we introduced the domain, LOV2, which is sensitive to light. Once we optimized both domains, we combined them into one final logic-gate design.”

The team inserted the modified gene into HeLa cancer cells and, using confocal microscopy, observed the cells in vitro. They studied the effects of each of the inputs separately, as well as the combined effects of the inputs, on the cells’ behavior.

They discovered that not only could they rapidly activate FAK using light and rapamycin, but also that this activation resulted in the cells undergoing internal changes that enhanced their adhesive capabilities, which decreased their motility.

“We show for the first time that we can build a functioning nanocomputing agent within living cells that can control cell behavior,” continued Vishweshwaraiah. “We also discovered some interesting features of the FAK protein, such as the changes it triggers in cells when it is activated.”

Dokholyan noted that the team hopes to eventually evaluate these nanocomputing agents in vivo within living organisms.