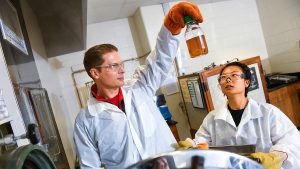 Researchers have reported advances in understanding and manipulating an important human gut bacterium, Bifidobacterium, which is commonly used in probiotics that help maintain healthy microbiomes. The work paves the way for developing next-generation probiotics and highlights the need to develop individualized CRISPR-based engineering approaches for certain strains of bacteria.

The research was led by Rodolphe Barrangou, PhD, the Todd R. Klaenhammer distinguished professor of food, bioprocessing, and nutrition sciences at North Carolina State University, and was published in the Proceedings of the National Academy of Sciences of the United States of America (“Genomic and epigenetic landscapes drive CRISPR-based genome editing in Bifidobacterium”).

Barrangou’s lab uses CRISPR-Cas genome editing systems to understand and improve beneficial bacteria in fermented foods and probiotics. “As our lab expands and diversifies the types of good bacteria that we work with, we turn to more finicky bacteria, like Bifidobacterium,” Barrangou said. “This bacterium is harder to grow and harder to work with than others.”

The experimental manipulation of Bifidobacterium has been hindered by its complex cell wall and abundance of restriction-modification systems, among other factors. However, as Meichen (Echo) Pan, a doctoral student in Barrangou’s lab and the first author of the paper, pointed out, these bacteria are used in many probiotics—products with live microorganisms that confer health benefits by improving the composition of the gut microbiome.

“Bifidobacterium and Lactobacillus are the top two genera in commercial probiotics,” Pan explained. “There are tremendous demands and interests from the probiotic industry to better understand these bacteria, to further enhance their probiotic efficacies, and maximize their potential health benefits.”

“But [Bifidobacterium] is much more difficult to manipulate compared to Lactobacillus,” she continued. Finding molecular tools that work in Bifidobacterium is essential for engineering strains with improved probiotic characteristics, as well as for developing biotherapeutic applications.

“CRISPR is used routinely on the bench these days and people including scientists like me start to take CRISPR for granted,” Pan observed. “Not to trivialize engineering E. coli, but using CRISPR to genetically modify non-canonical bacteria such as Bifidobacterium is a whole new ball game.”

Using their tailored CRISPR-based strategy, they re-sensitized Bifidobacterium to tetracycline, a common antibiotic. “Restoring antibiotic sensitivity is conceptually and practically important because bacteria can potentially transfer antibacterial resistance to other bacteria in the gut,” Pan said.

Besides re-sensitization to antibiotics, Barrangou explained that there are additional opportunities for enhancing the probiotic capacity of Bifidobacterium. One possibility is to optimize the uptake and catabolism of carbohydrates from breast milk, which would set up a healthy microbiome in infants—where Bifidobacterium predominate—and promote life-long gut microbiome homeostasis. Another possibility is to engineer cell surface structures that modulate the molecular interplay between host epithelial and immune cells to control inflammation.

The researchers then expanded their study, uncovering epigenetic patterns that differed among strains, despite their relative genomic homogeneity, that may contribute to variability in editing efficiency.

“This was a relatively unexpected but obviously practically important finding,” Barrangou said. “At a time when we all understand the importance of personalized medicine and nutrition, and also appreciate how the epigenome shapes much of the genome biology and cellular function, it is important to note that even cells that are 99.9% genetically identical sometimes necessitate customized genome editing strategies.”

The researchers’ strategy could be applied to other bacteria, Barrangou pointed out. There are numerous other species in the human gut microbiome and a plethora of bacteria that are important for microbiomes across environmental niches—including in the water and soil—that are candidates for this type of approach.

“Most research is done on model organisms because it’s fast and easy, but imagine how much more we can learn by studying non-model organisms that actually matter and impact our health,” Pan said. “I am really proud to be part of a research group that is up for challenges and always strives to innovate and conquer.”